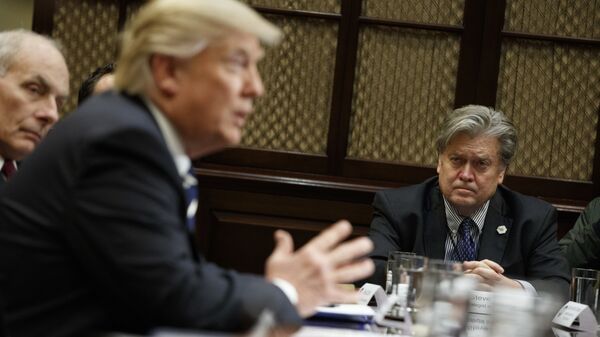 Lilia Dergacheva
All materialsWrite to the author
Donald Trump's former strategist, Steve Bannon, was arrested Thursday in connection with his role in a fundraiser for a private Mexico border wall venture, which he embarked on soon after his sudden resignation from the White House in August 2017.

Donald Trump's former campaign boss Steve Bannon has slammed his arrest, lambasting it as "a political hit job" and "nonsense" and vowed to counter the charges brought against him, when speaking to a radio show called the "War Room".

"Everybody knows I love a fight", he said. "I'm in this for the long haul and I'm in this for the fight", he reiterated, stressing that the action he is accused of – conspiracy in a bid to raise funds for building a US-Mexican wall – was in support of the president, who has since sought to distance himself from his former strategist.

"This was to show support for President Trump in the wall movement and the wall has to be built", Bannon said, claiming that the charges are an effort to "intimidate" people who back the president, ahead of the upcoming presidential polls.

Bannon also queried if the timing of his arrest was specially chosen to coincide with political campaigns having in recent months been in full-swing across the country.

"The timing is exquisite", he said, "we have 72 [days until Election Day] and a wake up to what Donald Trump says is the most important election", the PR manager pondered.

Bannon was arrested on 20 August and charged with conspiracy to commit wire fraud and money laundering as part of a crowdfunding effort to build a wall along the southern border – Trump's key 2016 campaign pledge meant to fight back a flow of illegal immigrants to America's borders.

Prosecutors alleged that in a fraudulent move, Bannon had taken at least $1 million of the money raised from supporters to pay another group leader's vast personal expenses. 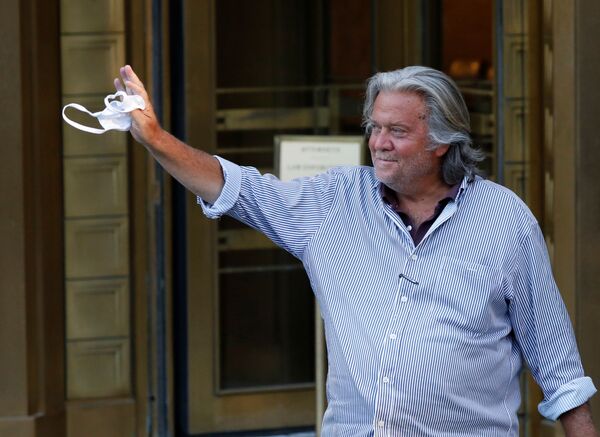 White House press secretary Kayleigh McEnany said in a statement on Thursday that Trump "has not been involved with Steve Bannon since the campaign and the early part of the administration, and he does not know the people involved with this project" referencing Bannon's alleged Mexican border venture, which he started after submitting his two-week resignation notice from the administration on 4 August 2017.

"President Trump has no involvement in this project and felt it was only being done in order to showboat, and perhaps raise funds", she contended.

She also stressed that President Trump did not support the private wall project, believing that such things should be built by the government and not private companies or individuals.