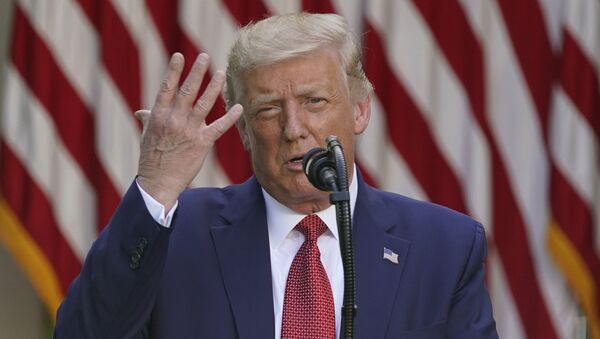 © AP Photo / Evan Vucci
Subscribe
International
India
Africa
A new request for an immediate administrative stay filed by US President Donald Trump's legal team was denied Friday by the US Court of Appeals for the Second Circuit.

At the same time, Trump's team will have his motion for a stay pending appeal heard before a three-judge panel on September 1, 2020, according to the memo issued on Friday by court clerk Catherine O'Hagan Wolfe.

In their initial request filed on Thursday, the US president's attorneys argued that a grand jury subpoena of his financial records from Trump's accounting firm Mazars USA poses a "quintessential type of irreparable harm," despite jurors being sworn to secrecy.

"Given the need for emergency relief, the President is also seeking a stay pending appeal from the Second Circuit and the U.S. Supreme Court.” the request issued in the US District Court of the Southern District of New York read.

“As this court suggested in its earlier ruling in this litigation, that notion, applied as so robustly proclaimed by the president’s advocates, is as unprecedented and far-reaching as it is perilous to the rule of law and other bedrock constitutional principles on which this country was founded and by which it continues to be governed,” Senior District Judge Victor Marrero, of the US District Court for the Southern District of New York, expressed the same day, as reported by Courthouse News.

“That strategy potentially would enable the clock to run on applicable statutes of limitations, risk the loss of witnesses and evidence and thus possibly foreclose law enforcement concerning any crimes under grand jury investigation,” he added.

A stay decision from the Supreme Court has yet to be announced.