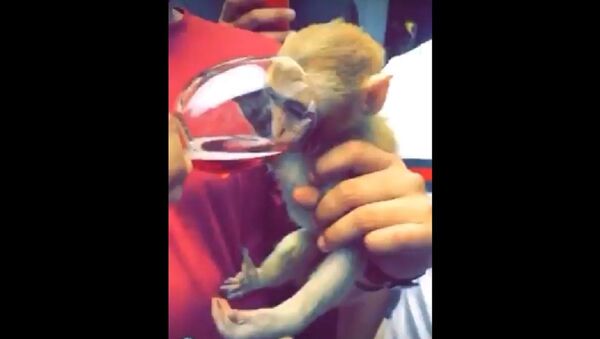 New Delhi (Sputnik): In India, confining a monkey is a crime under the Wildlife Protection Act but a tattoo artist from Chandigarh has been keeping a captive ape as a companion. The matter came to the fore from his Instagram photos and videos with the animal.

A video of a baby monkey, identified as a sub-adult rhesus macaque, being forcefully fed a red liquid, claimed to be wine, has gone viral on social media. The Forest Department in the union territory Chandigarh took note of the matter and filed a complaint against the accused, who is a tattoo artist.

Though accused were granted #bail after bail bonds of Rs 50,000 but the case has been registered & trial will continue. A strong message has gone to the society to respect #wildlife. I appeal everyone to rise for the cause & support 🙏
This is not #cool, it’s a #crime @PetaIndia pic.twitter.com/hMHs2ssx7a

Since keeping a monkey captive is a crime in India under the Wildlife Protection Act, the Forest Department conducted surprise raids at the accused's workplace and home. Kamaljit Singh, the tattoo artist, has since said that red liquid was juice and had released the monkey after he was informed by a follower that it was a crime. He said he had found the monkey injured before the lockdown.

However, netizens are furious at such a "satanic" act.

God bless all! We as souls to be empathetic with animals that coexists with us in our ecosystem. Consequences of such acts could bring new pendamic in the coming time.

Beaware- He is seeing it all!

These guys Must go to jail to set the right example in society. We just cannot abuse them and get away !!

These kind of people are blot on our society. They are living a demeaning life devoid of basic human values.

Is it Existential Crisis or Satanic/Devilish Act??