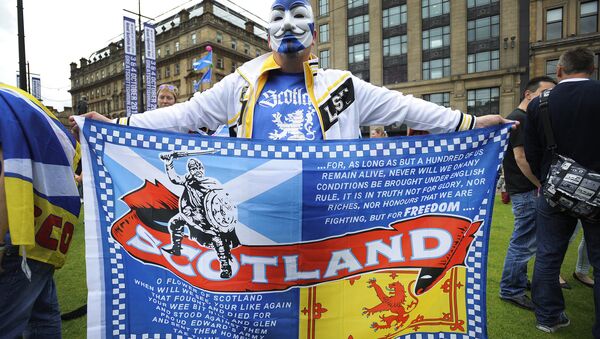 Tommy Sheridan
All materials
The question of Scottish independence is now a matter of when not if.

For the first time ever six consecutive opinion polls have recorded clear majorities for Scotland leaving the British union and standing on her own two feet. The latest two polls even prompted Scotland’s First Minister to issue posts on Facebook and Twitter yesterday highlighting and lauding the fact majorities for independence are now clear and consistent. Her comments were positive and provide an excellent context for next month’s annual Hope Over Fear rally in Glasgow’s George Square:

The polls were conducted by reputable polling organisations ComRes and Panelbase and indicate 54% and 55% support for independence, respectively. No wonder the First Minister is so pleased. Formal campaigning for independence has been suspended since the March Covid19 lockdown yet the number of Scots who see independence as their future has not only increased but become more consistent.

From Four Successive Polls for Independence to Six

Only last week even the fiercely unionist Scotsman newspaper was compelled to carry a headline certain to cause much concern and gnashing of teeth in unionist circles particularly as the source of the poll they were reporting on was a polling organisation renowned for lower estimates of Indy support in Scotland:

A new poll has found the majority of the country continue to back Scottish independence.

“A new poll has found the majority of the country now support Scottish independence.

A new YouGov poll, for The Times, found that 53 per cent of the country - excluding "don't knows" - would vote in favour of Scottish independence.

This is the fourth survey in a row to put the independence vote ahead of the Union vote, and the highest level of support for Scottish independence ever recorded by YouGov.

From the ‘fourth survey in a row’ last week to the sixth survey in a row yesterday and one of the most significant features of the latest Panelbase survey was the age breakdown analysis. Support for independence in Scotland amongst 16 to 54 year olds is a healthy and solid 59% but the 16-34 age group records an incredible 72% support for Scotland becoming a normal independent country.

That poll was commissioned by the Business for Scotland group which has long advocated the economic case for Scotland’s independence with sound economic research and analysis which everyone should access, read and share as it illustrates clearly and authoritatively that Scotland is not only capable of surviving as an independent nation but has the potential to become one of the most prosperous countries in the world.

With so many young people committed to an independent Scotland the realisation of that goal becomes more inevitable than ever. The unionist arguments for remaining part of Britain grow weaker by the day and are disseminated by predominantly older, comfortable, and often reactionary sources wrapped in a union jack flag synonymous with repression, exploitation, and deceit.

Unionism is Backwards – Independence is Progressive

Those on the side of unionism are on the wrong side of history. They are on the side of vested privilege, bloody imperialism and the Rule Britannia values of arrogant chauvinism and ignorant xenophobia. The Scottish independence movement is progressive and inclusive. The unionist opposition is reactionary and negative. The ‘Welcome Refugees’ and ‘Scrap Trident’ placards are carried by the independentistas, not the unionists.

In keeping with the public promise given to thousands on October 2014 only weeks after the disappointment of losing the September 18th independence referendum the grassroots Hope Over Fear independence campaign will again host an annual rally in the centre of Glasgow to pronounce loud and clear that we will continue to strive for a new and better independent Scotland freed from the restrictions and alien values of Westminster to pursue a country based on fairness, compassion and peace.

This year’s event will take place on Saturday 19th September from 1pm and will comply with all the health and safety advice and social distancing restrictions. The usual communal dancing, singing, and hugging may be postponed but the gathering will go ahead with stirring speeches and live musical performances. One of the keynote speakers will be long serving SNP MP and champion of the independence cause Angus MacNeil. The National Columnist Paul Kavanagh, the Wee Ginger Dug, and prolific independence blogger Peter Bell will also speak alongside others from the Indy grassroots movement.

Hope Over Fear is an independence campaign, not a political party but it has called for SNP votes at each of the last three general elections and the 2016 Scottish Parliament election. It is therefore an SNP friendly group but like many others it is impatient for the opportunity to declare our independence.

Of course, such a declaration must be democratically underpinned but the SNP now has four separate and solid mandates for a second referendum vote and each time it has been sought the Tories have said no. That undemocratic intransigence will not change in the next four years. Johnson and his spiv crew of reactionary millionaires were elected by England with an 80-seat majority. They are increasingly despised in Scotland, but nothing will be given to us. We must demand our democratic right to freedom and independence.

The rally theme on 19th September is ‘Time To Go’

While the Tories continue to lead in opinion polls in England they are consistently falling in polls in Scotland and the fact of the two separate countries becomes clearer to anyone willing to see each day. Johnson represents England not Scotland. They lost each of the last three general elections here in Scotland and haven’t won one since 1955.

An Independence Majority Parliament Next May Must Deliver IndyRef2

The Scottish Parliament elections are only a matter of eight months away. All independence supporting parties, groups and individuals contesting those elections must do so on a firm and unequivocal commitment to holding IndyRef2 in September or October next year regardless of Westminster’s opposition.

In other words, we don’t ask any more for a referendum we inform them when we are holding it and we do so on the back of a resounding vote next May for independence supporting candidates. If the Scottish people elect a parliament next May which has an independence majority then that parliament must be mandated to organise IndyRef2 by October 2021 at the latest.

We cannot continue to promote empty mandates, we must promote a meaningful mandate. If Scotland rejects the independence supporting cause at the ballot box next May there will be no referendum. But if Scotland elects an independence majority then IndyRef2 is on, whether Westminster agrees or not. No more meekness in the face of democracy denying hypocrites.

Come and join the Hope Over Fear Rally on September 19th. Fill Glasgow’s George Square with positivity and progressive values. Declare for the beginning of a journey towards a fairer Scotland that values her citizens more than private profits and promotes human solidarity and cooperation not the Tory creed of greed and selfishness. In the words of the song inspired by the Hope Over Fear campaign and written by the multi-talented Glasgow singer/songwriter Gerry Cinnamon:

Hope over fear, don’t be afraid

Carpe Diem, will you seize the day?