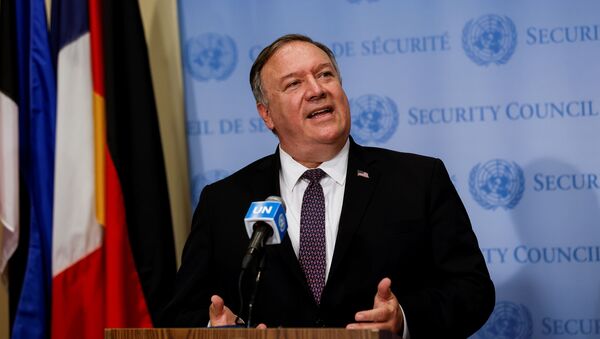 © REUTERS / Mike Segar
Subscribe
International
India
Africa
US Secretary of State Mike Pompeo slammed Washington's European allies in a Thursday news conference from the United Nations Security Council (UNSC), claiming that while officials from Germany, France and the UK have privately expressed support for the extension of the arms embargo on Iran, they publicly "chose to side with ayatollahs."

"We will never allow the Islamic Republic of Iran to have a nuclear weapon," Pompeo remarked during his UNSC speech.

After admonishing France, Germany and the UK, he went on to applaud the Gulf Cooperation Council (GCC) nations - Bahrain, Kuwait, Oman, Qatar, the United Arab Emirates and Saudi Arabia - stating they "deserve praise for showing courage and unity in warning about the danger from Iran."

He then referenced the GCC's August 9 statement to the UN, which called for an extension of the international arms embargo, set to expire on October 18.

“It is inappropriate to lift restrictions on the supply of weapons from and to Iran until Iran gives up its destabilizing activities in the region and stops supplying terrorist and sectarian organizations with weapons,” GCC Secretary-General Nayef Falah Mubarak al-Hajraf said, as reported by Reuters.

The three European nations have since issued a joint statement explaining that as still-active members of the Joint Comprehensive Plan of Action (JCPOA) agreement, they cannot support the US' push to invoke the "snapback" mechanism because it violates the agreement.

"France, Germany and the United Kingdom ('the E3') note that the US ceased to be a participant of the JCPoA following their withdrawal from the deal on May 8, 2018," they wrote.

"We remain committed to the JCPoA despite the significant challenges caused by US withdrawal. We believe that we should address the current issue of systematic Iranian non-compliance with its JCPoA obligations through dialogue between JCPoA participants."

Factsheet on the illegitimate and felonious U.S. attempt to re-impose U.N. sanctions on Iran pic.twitter.com/wPbFytmA98

Russia and China have both expressed support for Iran, with Russian Deputy Foreign Minister Sergei Ryabkov even calling Washington's push for sanctions "absurd."

"We have repeatedly said that the US has already withdrawn from the JCPOA and therefore has no right to request the restoration of the UN sanctions regime against Iran," Chinese Foreign Ministry spokesman Zhao Lijian noted during a briefing.