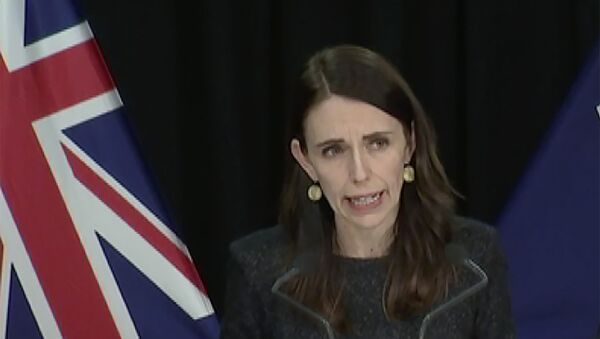 © REUTERS
Subscribe
New Zealand's Prime Minister Jacinda Ardern has announced the postponement of the country's general elections, which were due to take place on 19 September, by a month to 17 October due to the raging COVID-19 pandemic. Former New Zealand politicians have discussed how the move could affect the balance of power in the upcoming vote.

While making an announcement on Monday, Ardern specified that she had consulted the leaders of New Zealand's major political parties before setting the new date. She made it clear that no new delays are on the table.

Earlier, on 12 August, the country's Auckland region moved to Alert Level 3 at noon over the coronavirus spread, while the rest of the country is currently operating at Alert Level 2. According to the Johns Hopkins Coronavirus Research Centre, the nation of 4.8 million people has registered 1,654 confirmed coronavirus cases and 22 COVID-related deaths during the pandemic.

"I think the one-month postponement of our elections was seen by a great many of the public as 'only fair' given that the Level 3 lockdown in Auckland, and Level 2 lockdown in the rest of the country, made normal election campaigning impossible", says Don Brash, a former New Zealand politician and ex-leader of the National Party.

Although the country curbed the pandemic in June, it is facing a new spike that has prompted the authorities to reinstate quarantine measures. However, the new outbreak caught New Zealand by surprise, with the officials still having no clue as to how the virus found its way back.

The prime minister's decision was endorsed by most Kiwis and major political parties: citing the latest polls, The New Zealand Herald outlines that 60% of respondents said they wanted the vote delayed.

He draws attention to the fact that there was even some discussion about the possibility that New Zealand First, together with the National and ACT New Zealand parties, could have formally written to Governor-General Patsy Reddy "to advise that the prime minister no longer had the confidence of parliament, thereby making a postponement of the election a certainty".

The prime minister had no option but to delay, as the deputy prime minister made the option of keeping the same date untenable, explains Leighton Baker, a businessman and leader of the New Conservative Party in New Zealand.

"The decision to go just one month later is because of the financial harm that the lockdowns are having and her current high polling", Baker points out. "There is a real concern that as the economy tightens more people will question the viability of the lockdowns".

How the Delay May Affect the Balance of Power

In her Monday speech, Arden highlighted that the delay of the general elections "gives all parties time over the next nine weeks to campaign and the Electoral Commission enough time to ensure an election can go ahead".

Prior to this, the opposition National Party suspected that the Labour Party and its leader Jacinda Ardern had an unfair competitive advantage as election campaigning was largely banned during this month due to the pandemic, according to the BBC.

However, Baker admits that the government already has "a huge advantage" due to Ardern's handling of the outbreak, with the prime minister giving "updates" on the unfolding situation daily in the media.

"This prominence in front of voters is a very real benefit for the government in a similar way that [45th Mayor of Christchurch] Bob Parker was re-elected after the earthquakes when prior to them all the polls [showed] him losing his position", he says.

For his part, Don Brash deems that the delay is largely seen as giving some political assistance to the opposition parties, particularly to the National Party.

"As you will know, the National Party has only very recently changed its leader, so an extra few weeks gives her an opportunity to get more visibility with the public", the former New Zealand politician observes.

A few more weeks could also help New Zealand First, according to him: "Their current polling suggests that if an election were held today they would be out of parliament", Brash notes. "Their leader, Winston Peters, is no doubt hoping that a one-month postponement will help him to retrieve the situation".

Still, the postponement's effect on the election appears to be solely theoretical, remarks Leighton Baker, "as no-one knows what the result on September 19 would have been anyway".