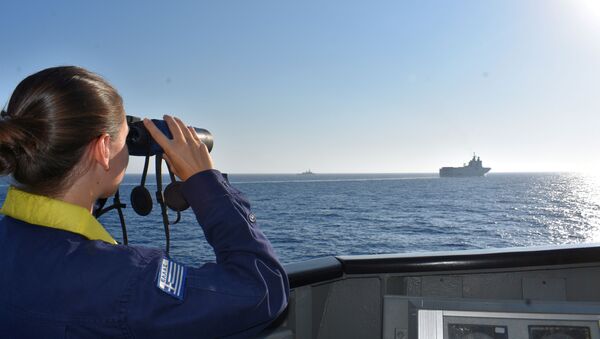 Oleg Burunov
All materialsWrite to the author
The Turkish-Greek tensions over drilling in the Eastern Mediterranean have persisted for many months, escalating earlier in August when Athens demanded that Ankara immediately halt its "illegal" drilling activities in the area.

Greek Prime Minister Kyriakos Mitsotakis has told CNN that Athens will not tolerate Ankara’s drilling-related steps in the Eastern Mediterranean, but that it is ready to sit down at the table to discuss the problem.

“My message to Turkey is very simple: stop the provocations and let’s start talking as civilised neighbours”, he said, adding that Athens’ only disagreement with Turkey is the issue pertaining to delimitation of maritime zones.

Mitsotakis pledged that if the proposed talks collapse, the dispute over the waters that Greece says are undisputed would be submitted to the International Court of Justice (ICJ) in The Hague. 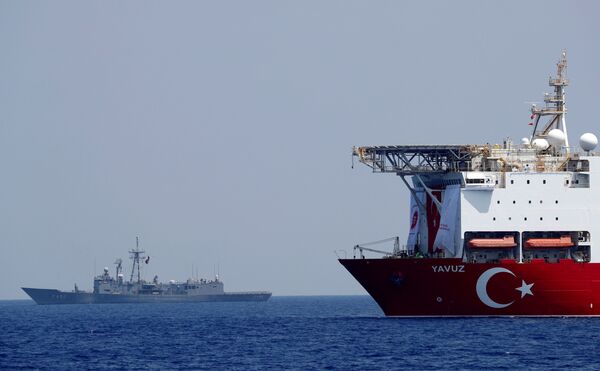 The Turkish drilling vessel Yavuz is seen being escorted by a Turkish Navy frigate in the eastern Mediterranean off Cyprus, August 6, 2019
© REUTERS / Murad Sezer

He pointed out that Athens “cannot put up with the unilateral actions of Turkey", which challenges Greece’s exclusive economic zone (EEZ) “by sending not just an exploration ship but also a significant number of military vessels to the area”.

“If Turkey considers these areas to be disputed and we consider them to be part of the Greek EEZ, they should sit down with us and discuss about it. This is what we have always proposed. What we cannot accept is a fait accompli as a result of Turkish provocation”, the prime minister underscored, vowing at the same time that Greece would “never seek escalation”.

He described the issue as not just a dispute between two immediate neighbours but as a challenge for both Europe and the world as a whole.

“This is why I feel that Turkey is isolating itself as it pursues such a policy”, Mitsotakis said, adding that the US and the EU are already considering slapping sanctions on Ankara,

“Turkey always has the opportunity to change its approach. However, it must realise the fact that if it does not change its attitude, there will be consequences and its relationship with Europe as a whole will be jeopardised. Because problems of this kind cannot remain unanswered […]", the prime minister concluded.

Turkey Restarts Gas Drilling in Eastern Mediterranean as Hopes for Talks With Greece Collapse
The interview came a few weeks after the Greek Foreign Ministry called on Turkey to immediately stop its "illegal" drilling activities in the Eastern Mediterranean, warning that Athens will defend itself if necessary.

Referring to Turkey's plans as a "new serious escalation", the ministry suggested in a statement that they had "exposed" Ankara's "destabilising role".

“Greece will not accept any blackmail. It will defend its sovereign rights. We call on Turkey to immediately end its illegal actions that undermine peace and security in the region”, the statement stressed.

The remarks followed the Turkish surveying ship Oruc Reis starting to carry out seismic survey activities in a disputed zone of the eastern Mediterranean Sea south of Antalya and west of Cyprus.

This was preceded by Turkish Foreign Ministry spokesman Hami Aksoy stating that Greece's actions, specifically its "pirate agreement with Egypt" on the creation of an EEZ, violated Ankara's own continental shelf rights.

"Greece demonstrated by its pirate agreement with Egypt on August 6 that it was not sincere and honest about the dialogue. This agreement violated the right of our country and Libya to the continental shelf in the eastern Mediterranean. After that, our vessel Oruc Reis started the previously planned seismic research activity. There is no legal basis for Greece to oppose it”, Aksoy said.

The Turkish-Greek tensions over the drilling in the Mediterranean have been in place for many months, further escalating earlier in August when Athens signed an agreement with Egypt on the delimitation of maritime zones to reassert its sovereignty claims.

Turkey, on the other hand, signed an agreement with similar provisions with Libya in 2019 to appropriate a lion's portion of the Mediterranean waters that Greece considers part of its EEZ. Athens has repeatedly slammed Ankara’s modified map of maritime borders as an infringement on its sovereign rights.

000000
Popular comments
Eventually Turkey will steal islands but Greece goal should be deny Turkey having any justification. Instead Greece can expose Turkey and show this theft was really an act of brute force. Call for NATO votes. Call for sanctions. Seek legal action. Bring global condemnation. Greece shouldn't think the France, the US or Russia will help just like they didn't help Cyprus. Expose Erdo.

minoan
20 August 2020, 20:01 GMT
000000
Newsfeed
0
New firstOld first
loader
LIVE
Заголовок открываемого материала
Access to the chat has been blocked for violating the rules . You will be able to participate again through:∞. If you do not agree with the blocking, please use the feedback form
The discussion is closed. You can participate in the discussion within 24 hours after the publication of the article.
To participate in the discussion
log in or register
loader
Chats
Заголовок открываемого материала
Worldwide
InternationalEnglishEnglishMundoEspañolSpanish
Europe
DeutschlandDeutschGermanFranceFrançaisFrenchΕλλάδαΕλληνικάGreekItaliaItalianoItalianČeská republikaČeštinaCzechPolskaPolskiPolishСрбиjаСрпскиSerbianLatvijaLatviešuLatvianLietuvaLietuviųLithuanianMoldovaMoldoveneascăMoldavianБеларусьБеларускiBelarusian
Transcaucasia
ԱրմենիաՀայերենArmenianАҧсныАҧсышәалаAbkhazХуссар ИрыстонИронауОssetianსაქართველოქართულიGeorgianAzərbaycanАzərbaycancaAzerbaijani
Middle East
Sputnik عربيArabicArabicTürkiyeTürkçeTurkishSputnik ایرانPersianPersianSputnik افغانستانDariDari
Central Asia
ҚазақстанҚазақ тіліKazakhКыргызстанКыргызчаKyrgyzOʻzbekistonЎзбекчаUzbekТоҷикистонТоҷикӣTajik
East & Southeast Asia
Việt NamTiếng ViệtVietnamese日本日本語Japanese中国中文Chinese
South America
BrasilPortuguêsPortuguese
NewsfeedBreaking
06:37 GMTBJP MP Gautam Gambhir Receives Third Death Threat After Similar Messages From 'Daesh Kashmir'
06:06 GMTQueen Elizabeth II Picks Up Her 'MI6 Anti-Hacker Encrypted' Phone 'for Two People Only'
06:01 GMTFukushima Plant's Operator Starts Surveys to Prepare for Wastewater Dump, Reports Say
05:52 GMT'All Mouth and No Trousers': Boris Johnson 'Fed Up' With Priti Patel Over Migrant Channel Crossings
05:35 GMTFood Prices in Israel Much Higher Than in EU, Here's Why
04:46 GMTCOVID-19 Live Updates: Israel Closes Borders for Two Weeks Over Omicron Strain Fears
03:42 GMTHis Life, His Rules: Biden Spotted With Mask Down on His Chin While Inside Shop
03:28 GMTSouth Africa Laments Travel Restrictions, Calling Them ‘Punishment’ For ‘Excellent Science’
02:57 GMTGhislaine Maxwell Ready to Take Stand at Trial to 'Save Her Own Life' - Report
01:58 GMTMike Tyson Reveals Marijuana Makes Him 'Different Person' as He Launches New Cannabis Line
01:52 GMTConcerns About Spread of New Covid Strain Rise as Another Migrant Caravan Crosses Into US - Report
01:28 GMTMass Theft Occurs at Best Buy Store in Minnesota, Police Say
00:26 GMTTrump Keeps Mt. Rushmore Sculpture With His Face on It on Display in His Office
00:01 GMTA Glimpse of Hope: Biden Approval Rating Climbs 2 Points, But Still Scores Low on Economy - Poll
YesterdayAbbott Says Texas Is Ready For Possible Cold Winter Due to ‘Dozen Laws’ Signed
YesterdayBarnier Says France Has to 'Be Ruthless With the British' Amid Migrant Crisis - Report
YesterdayEx-Labour Leader Corbyn Slams 'Irrational' Suspension From Party One Year On
YesterdaySudanese Army Repels Attack by Ethiopian Troops With Casualties on Both Sides
YesterdayWHO Says No Need for Panic Over Omicron Coronavirus Strain as Much Remains Unknown
YesterdayBiden's First Christmas Tree Will Reportedly Cost Taxpayers $139,000