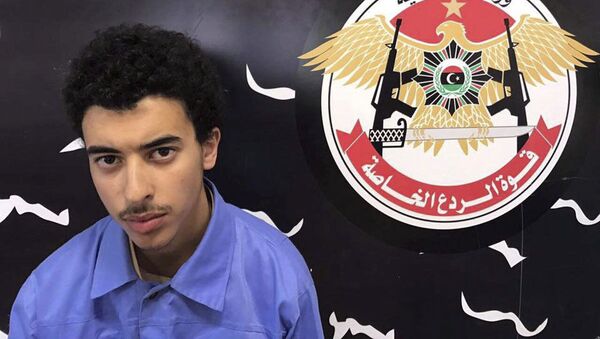 © REUTERS / Special Deterrence Force/Libyan Interior Ministry
Subscribe
On 22 May 2017 suicide bomber Salman Abedi detonated a device in the foyer of Manchester Arena moments after an Ariana Grande concert, killing 22 people. His brother Hashem was extradited from Libya and convicted by a jury in London.

Hashem Abedi has been jailed for the murder of 22 people who were blown up by his suicide bomber brother, Salman, at the Manchester Arena in May 2017.

Abedi, 23, who was extradited from Libya last year, had denied 22 counts of murder, attempted murder and conspiring to cause explosions.

But he was convicted earlier this year and on Thursday 20 August he was jailed for life at the Old Bailey in London and was told he must serve at least 55 years behind bars.

Thousands of fans of the US pop star Ariana Grande attended the concert in Manchester in May 2017 when Salman Abedi set off the bomb in his backpack in the foyer of the arena.

Sentencing him, Mr Justice Jeremy Baker said: "The stark reality is these were atrocious crimes. Large in scale, deadly in intent, appalling in their consequences."

Judge Baker added: "The choice of the Ariana Grande concert as the target for this incident is one in which the defendant and his brother will have readily appreciated the heightened risk of death and serious injury to
those who were particularly vulnerable because of their young age." ​​ A portrait of Eilidh MacLeod, 14, who has been named as one of those who died in Monday's Manchester bombing, is seen at St Ann's Square in central Manchester, England, Friday, May 26 2017.
© AP Photo / Emilio Morenatti

The Mayor of Greater Manchester, Andy Burnham, said on Thursday: "The attack on the Manchester Arena, and the targeting of innocent children and families, was an act of pure evil."

Jayne Jones, said of her daughter Nell, 14: "We miss her laughter, her wicked sense of humour. But we cherish her legacy."

June Tron, whose son Philip, 32, died in the blast, said: "I felt immense guilt. I just want the trial over. I want justice so I can start to breathe."​

Prosecutor Duncan Penny QC said the brothers - whose family originated from Libya but had settled in Manchester - planned the bombing together for months and Hashem obtained the chemicals needed for the bomb and bought the metal containers used to build it.

​He said Hashem also bought the screws and nails which were packed into the bomb to maximise its impact and organised a flat in Manchester where the device was made and stored.

A few weeks after the bombing, Grande returned to Manchester and put on a special charity concert, where she was joined by other singers, including Manchester music legends Oasis.