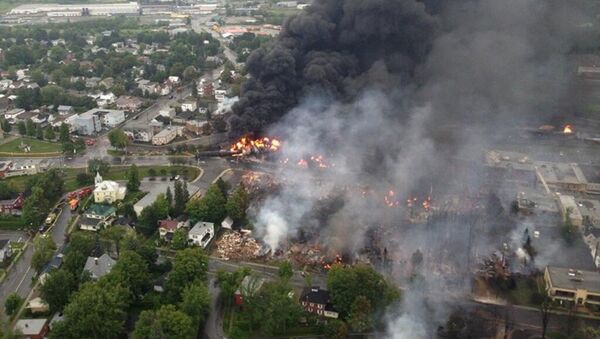 © Earthjustice/Sûreté du Québec
Subscribe
Several US states, as well as a California-based nonprofit, have taken legal action against a recent Trump administration decision authorizing the railway transportation of up to 30,000 gallons of liquefied natural gas (LNG) per tank car. Ships that carry the substance have been described by one state attorney general as “floating bombs.”

Environmental public interest organization Earthjustice announced on Tuesday that it had filed a petition for review against the US Department of Transportation and its Pipeline and Hazardous Materials Safety Administration (PHMSA) over the recent federal decision to allow the bulk transportation of LNG in rail tank cars, effective August 24.

“It would only take 22 tank cars to hold the equivalent energy of the Hiroshima bomb,” Earthjustice attorney Jordan Luebkemann asserted in the release. “It’s unbelievably reckless to discard the critical, long-standing safety measures we have in place to protect the public from this dangerous cargo. That’s why we’re filing this challenge.”

Earthjustice explained in its news release that while LNG is cooled during transport, a disturbance of its container could cause the gas to rapidly expand “by 600 times its volume.” Furthermore, the LNG’s escape on a single rail car can turn the whole transport vehicle into a “bomb train” that may be powerful enough to “destroy a city.”

The Sierra Club, Center for Biological Diversity, Clean Air Council, Delaware Riverkeeper Network, Environmental Confederation of Southwest Florida and Mountain Watershed Association are all listed as petitioners in the United States Court of Appeals for the DC Circuit filing.

The District of Columbia and the US states of Maryland, New York, California, Delaware, Illinois, Massachusetts, Michigan, Minnesota, New Jersey, Oregon, Rhode Island, Vermont and Washington state have also filed a petition for review in the same DC court, arguing that the “rule is unlawful and therefore must be vacated.”

Democratic New Jersey Attorney General Gurbir Grewal claimed in a Tuesday Twitter post that the Trump administration’s fast-tracking of the decision “without adequate safety and environmental studies” poses a risk to US citizens across the nation.

The Admin has fast-tracked a plan to haul explosive liquefied natural gas by train through communities nationwide.

Without adequate safety and environmental studies.

We're fighting back to protect our residents. pic.twitter.com/CVuXYfQlc7

“Ships carrying LNG have been characterized as floating bombs,” said Maryland Attorney General Brian Frosh in an August 18 release on the filing.

“Rolling tank cars filled with LNG through our neighborhoods are vastly more dangerous. This proposal is heedless of the risks to the safety of our families and our natural resources posed by moving massive quantities of LNG by rail through our cities, towns.”

Earthjustice highlighted that this current fear of the potential hazard of “bomb trains” is not rooted only in theory. In fact, a train transporting crude oil - which is much less explosive than LNG - derailed while traveling through Lac Mégantic, Quebec, in 2013.

The derailment led to a fire that then spread throughout the entire train, causing boiling liquid expanding vapor explosions in several cars. The incident not only leveled the town center, but also killed 47 people.

The group asserted that due to LNG being more explosive, a similar derailment of a train carrying it could “produce a fireball up to a mile wide.”

“There’s a very good reason liquefied natural gas has never been shipped by rail in this country, and that’s because it’s wildly unsafe,” Joseph Otis Minott, executive director and chief counsel of the Clean Air Council, said in the Earthjustice release.

“I don’t want these dangerous trains going through my neighborhood, and trust me, you don't either.”

000000
Popular comments
How much more proof does the American people need that the administration and government does not give a damn about the average Americans' live, limb, and property.
Elsa JV
20 August 2020, 05:06 GMT1
000000
Time for cali to grow a pair; give the union the finger and leave to control its own destiny. They have nothing in common with DC, or for that fact, anything east of the Sierra Nevada Mountains. They are by no means obliged to remain a part of this hellstate, anymore than a passenger is obligated to say on a sinking ship.
Abstone78
20 August 2020, 11:21 GMT
000000
Newsfeed
0
New firstOld first
loader
LIVE
Заголовок открываемого материала
Access to the chat has been blocked for violating the rules . You will be able to participate again through:∞. If you do not agree with the blocking, please use the feedback form
The discussion is closed. You can participate in the discussion within 24 hours after the publication of the article.
To participate in the discussion
log in or register
loader
Chats
Заголовок открываемого материала
Worldwide
InternationalEnglishEnglishMundoEspañolSpanish
Europe
DeutschlandDeutschGermanFranceFrançaisFrenchΕλλάδαΕλληνικάGreekItaliaItalianoItalianČeská republikaČeštinaCzechPolskaPolskiPolishСрбиjаСрпскиSerbianLatvijaLatviešuLatvianLietuvaLietuviųLithuanianMoldovaMoldoveneascăMoldavianБеларусьБеларускiBelarusian
Transcaucasia
ԱրմենիաՀայերենArmenianАҧсныАҧсышәалаAbkhazХуссар ИрыстонИронауОssetianსაქართველოქართულიGeorgianAzərbaycanАzərbaycancaAzerbaijani
Middle East
Sputnik عربيArabicArabicTürkiyeTürkçeTurkishSputnik ایرانPersianPersianSputnik افغانستانDariDari
Central Asia
ҚазақстанҚазақ тіліKazakhКыргызстанКыргызчаKyrgyzOʻzbekistonЎзбекчаUzbekТоҷикистонТоҷикӣTajik
East & Southeast Asia
Việt NamTiếng ViệtVietnamese日本日本語Japanese中国中文Chinese
South America
BrasilPortuguêsPortuguese
NewsfeedBreaking
19:40 GMTWomen's Tennis Association Suspends Tournaments in China Due to Situation With Peng Shuai
19:27 GMTSuspected Michigan School Shooter to Be Charged With Terrorism, Four Counts of Murder
19:21 GMTAmerican Author Alice Sebold Apologises to Man Cleared of Her Rape After Spending 16 Years in Jail
19:15 GMTControversy Over Messi's Ballon d'Or Win Escalates as Ronaldo Backs Claims That PSG Ace Stole Award
19:13 GMTVideo: Russian Scientists Unveil Biomedicine Application for Shape-Memory Alloy
19:06 GMTMacron Calls BoJo 'Clown' With 'Attitude of Good-For-Nothing', French Media Claims
18:59 GMT'UFO Cloaked Inside Cloud' Spotted Above Florida, Blogger Claims
18:48 GMT'Sending a Message': Space Force General Claims US Satellites Are Attacked on Daily Basis
18:47 GMTCalifornia Health Officials Identify First Case of Omicron Covid Variant in United States
18:33 GMTRepublicans Fear 'Civil War' in Wake of Ilhan Omar Scandal, Voice Concerns About 2022 Midterms
18:05 GMTDeath Toll From Michigan High School Shooting Rises to 4
17:05 GMTWhat Pushed Donald Trump to View US Intelligence Community With Suspicion During His Tenure
16:42 GMT'Melding of Services': Australia Won’t Lose ‘Sovereignty’ Under AUKUS, says Biden’s 'Asia Tsar'
16:42 GMTIndia's Top Car-maker Maruti Suzuki's November Sales Down 9% On Chip Shortage
16:23 GMTMassive 'Potentially Hazardous' Asteroid 'Taller Than Chrysler Building' To Approach Earth Next Week
15:38 GMTUK Parliament Reportedly on Lockdown After Man Cycles Through Security Gates - Photos
15:34 GMTUS School Shootings on the Rise After Pandemic-Caused Hiatus
15:23 GMTDominic Raab Under Pressure To Bring In UK Child Cruelty Register After Approving ‘Tony’s Law’
15:08 GMTRonaldo's Bodyguards Investigated in Portugal Over Suspicion of Illegal Work – Report
14:46 GMTAnother UK Energy Supplier Pushed Out of Market by High Gas Prices