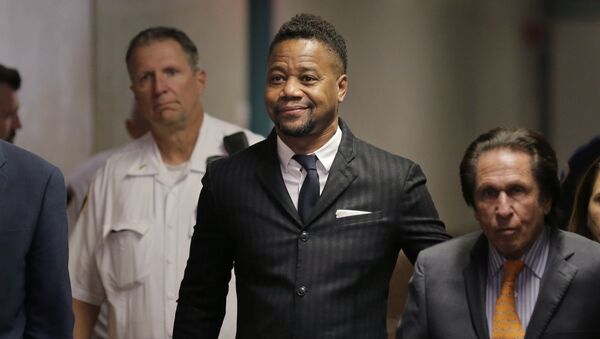 © AP Photo / Seth Wenig
Subscribe
A civil lawsuit filed by a “Jane Doe” in the Southern District of New York claims Oscar-winning actor Cuba Gooding Jr. raped her twice in a hotel room back in 2013.

Citing court documents filed on Tuesday, the Associated Press reported that Gooding allegedly invited Jane Doe up to his hotel room in the New York City, New York, borough of Manhattan after the two met at a Greenwich Village VIP lounge.

The filing claims that Gooding told the woman that he just wanted to change his clothes, but actually proceeded to vaginally and anally rape her after turning on music. She told Gooding “‘no’ numerous times but he wouldn’t stop,” according to the court document.

The woman claims the incident has left her with “emotional pain, suffering, and a loss of enjoyment of life.” She is now pursuing a jury trial, as well as compensatory and punitive damages.

Mark Jay Heller, Gooding’s attorney, denies the accusations laid out in the filing.

The attorney also argued that the unidentified woman is “probably just somebody who’s looking for some glory to bask in the publicity and notoriety of Cuba Gooding Jr.’s case,” reported the AP.

The actor, known for his performances in films such as “Jerry Maguire,” and “Boyz N the Hood,” recently appeared in a Manhattan court and pleaded not guilty to six misdemeanor charges of sexual abuse and forcible touching.

According to the AP, over two dozen women have made various claims against Gooding since allegations first arose. TMZ reported that at least 22 women have accused him of sexual misconduct.

Despite the case and allegations being against the actor, Heller and Peter Toumbekis - Gooding’s other lawyer - also made headlines after appearing to argue in a court filing that one woman who accused Gooding of groping her could be “predisposed to make a false accusation against someone.”

In a Friday court filing viewed by Page Six, Heller cited blog posts made by the woman in which she claimed that her “brain was one big fat mess.” The attorneys went on to highlight one blog entry about her breasts.

“And, in a world of extensions and fake boobs, my short haircut paired with my moderate breast size makes me feel invisible,” the anonymous woman wrote, according to the filing. “Some people are scared of others and want nothing more to be invisible. I am not that type of person. I am starving to be seen.”

Toumbekis was met with pushback by Judge Curtis Farber, who said that it was “simply offensive” for him to plan on asking the witness about “how she feels about the size of her breasts” during the trial - which remains unscheduled, according to Vulture.

“Tell me the connection between the size of her breasts and the relevance at trial,” Farber asked.

“She actually talks about the fact that she’s self-conscious about her breast size,” Toumbekis said, claiming his questions would reveal whether she “sometimes misconstrues what other people are saying to her because of her own self-esteem issues.”

000000
Popular comments
There's no way he did anything wrong because he is BLACK and we all know since the color of your skin means you are evil or good, and all BLACKS never do any wrong never ever ever, that must mean he is 100% innocent.
Rorshach1013
20 August 2020, 03:04 GMT1
000000
You're all right cause you ain't white. White get two years just for dressing like an insult.
JABOOTIE
20 August 2020, 05:55 GMT
000000
Newsfeed
0
New firstOld first
loader
LIVE
Заголовок открываемого материала
Access to the chat has been blocked for violating the rules . You will be able to participate again through:∞. If you do not agree with the blocking, please use the feedback form
The discussion is closed. You can participate in the discussion within 24 hours after the publication of the article.
To participate in the discussion
log in or register
loader
Chats
Заголовок открываемого материала
Worldwide
InternationalEnglishEnglishMundoEspañolSpanish
Europe
DeutschlandDeutschGermanFranceFrançaisFrenchΕλλάδαΕλληνικάGreekItaliaItalianoItalianČeská republikaČeštinaCzechPolskaPolskiPolishСрбиjаСрпскиSerbianLatvijaLatviešuLatvianLietuvaLietuviųLithuanianMoldovaMoldoveneascăMoldavianБеларусьБеларускiBelarusian
Transcaucasia
ԱրմենիաՀայերենArmenianАҧсныАҧсышәалаAbkhazХуссар ИрыстонИронауОssetianსაქართველოქართულიGeorgianAzərbaycanАzərbaycancaAzerbaijani
Middle East
Sputnik عربيArabicArabicTürkiyeTürkçeTurkishSputnik ایرانPersianPersianSputnik افغانستانDariDari
Central Asia
ҚазақстанҚазақ тіліKazakhКыргызстанКыргызчаKyrgyzOʻzbekistonЎзбекчаUzbekТоҷикистонТоҷикӣTajik
East & Southeast Asia
Việt NamTiếng ViệtVietnamese日本日本語Japanese中国中文Chinese
South America
BrasilPortuguêsPortuguese
NewsfeedBreaking
08:04 GMTMysterious Blast in Delhi Court Leaves One Injured - Video
07:56 GMTMan Died After 'Very Rare' Reaction to AstraZeneca COVID Jab, Inquest Told
07:49 GMTFrom Ariana Grande & BTS to William Shatner & Cristiano Ronaldo: Celebs Set Guinness World Records
07:30 GMTGOP Senator Urges Biden Not to Rule Out 'First Use Nuclear Action' Against Russia Over Ukraine
07:29 GMT'Quite Dramatic': Norwegian Churches Go Cold Amid High Electricity Prices
07:17 GMTJanuary 6th Events Panel to Vote on Contempt Charges Against Trump's Ex-Chief of Staff Next Week
06:43 GMTNorway Sees Record Number of Daily COVID Cases During Entire Pandemic
06:43 GMTUS Considers Energy Sanctions Against Russia as Last Resort, Reports Say
06:43 GMT'Final Moments' Before Helicopter Crash That Took Life of Indian Defence Chief Rawat Caught on Video
06:29 GMTNigerian President Hopes for Private Talks With Putin at Russia-Africa Summit, Ambassador Says
06:24 GMTTwo Democrats Join 50 Senate Republicans in Vote to Throw Out Biden's Vaccine Mandate
05:54 GMT'It P***** Me Off: Barcelona Boss Xavi Slams His Own Team as Catalans Are Relegated to Europa League
05:42 GMTBoJo Faces Tory Pressure Over Alleged Illicit No 10 Christmas Bash, Plan ‘B’ COVID Restrictions
05:24 GMT'God Giving a F***': Swedish Transport Administration Mural With Female Genitalia Sparks Outrage
05:05 GMTPentagon Refuses to Comment on Possible Anti-Iranian Drills With Israel
04:48 GMTWatch Coast Guard Diver Pull Body From Car Stuck at Brink of Niagara Falls
04:21 GMTMagnitude 6.0 Earthquake Strikes Off Southwestern Coast of Japan, Seismologists Say
04:12 GMTElon Musk Warns About Lots of 'Accounting Trickery' in Biden’s Build Back Better
03:43 GMTPro-Choice Coalition Unveils Plan to Expand Abortion Access in California
03:42 GMTHouse Dem Leaders Mulling Response to Boebert-Omar Feud as 'Squad' Wants Blood - Report