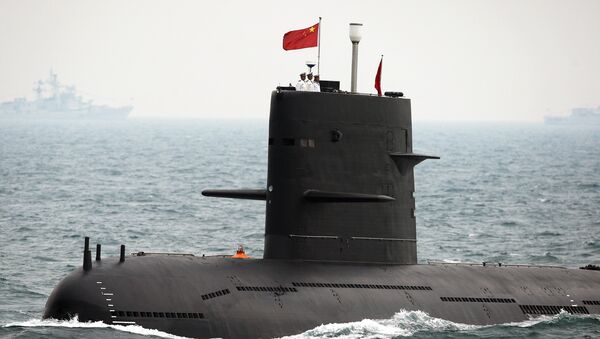 A recent satellite photo managed to capture a Chinese submarine entering a cave base on Hainan Island, at the northern end of the South China Sea.

On Tuesday, a photograph of the sea outside of Yulin Naval Base by private Earth-imaging company Planet Labs captured an unusual scene: a large submarine positioned just outside the mouth of the cavernous Chinese citadel.

The photo was first posted on social media by Radio Free Asia, a US government-funded media outlet that is part of the US Agency for Global Media. In the image, a submarine flanked by two small surface vessels sits just outside the mouth of the cave leading to the base, facing toward it.

A rare #satellite image of what appears to be a #Chinese Type 093 sub at the entrance of a not-so-secret, subterranean base at China's southern #Hainan island. Yulin Naval Base is home to subs of #China’s South Sea Fleet and provides convenient access to the South China Sea. pic.twitter.com/ONwqlXX5JK

​The Drive noted the barren seas around the base are themselves unusual, calling the situation “exceedingly rare based on our monitoring experience.”

According to Radio Free Asia, the sub is probably a Type 093, also called the Shang-class nuclear-powered attack submarine. The People’s Liberation Army Navy (PLAN) has six Type 093 subs, which are roughly equivalent in size and capability to the US Navy’s Los Angeles-class submarines.

Situated on the southern coast of Hainan Island facing the South China Sea, Yulin is home to the PLAN’s nuclear submarine fleet. Although it has been under construction since 2000, little is known about the subterranean sanctuary.

China isn’t the only country to use a sea cavern to hide its naval forces inside of mountains. Sweden’s Muskö naval base, about 20 miles south of Stockholm, was once a highly secret facility with three docks for destroyers and submarines. The Soviet Union maintained a similar facility at Balaklava, in Crimea, to service submarines based in the Black Sea.