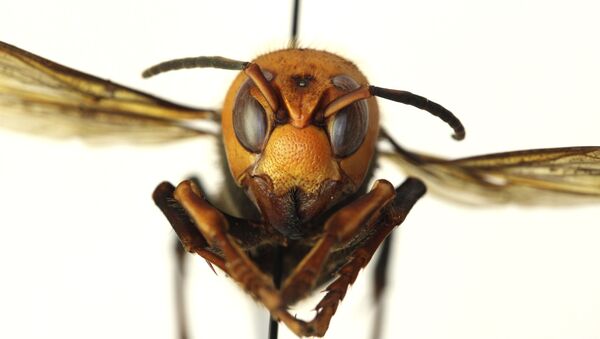 A male Asian giant hornet (Vespa mandarinia) - known popularly as the "murder hornet" - has been trapped and collected by Washington state officials, signaling that the invasive species may devastate the region’s bee colonies and agricultural system sooner than anticipated.

The Washington State Department of Agriculture (WSDA) announced in a Monday news release that it achieved the first capture of a male Asian giant hornet in US history via a bottle trap near Custer, Whatcom County, on July 29.

The WSDA entomology lab was able to confirm the specimen was indeed a male Asian giant hornet on August 13.

“But further examination of the research and consultation with international experts confirmed that a few males can indeed emerge early in the season,” Spichiger added.

This confirmation comes less than a month after another WSDA bottle trap achieved the state’s first capture of any Asian giant hornet. The unmated queen female, which had a 3-inch wingspan, was trapped on July 14, but not identified and processed by the WSDA until July 29.

Washington has trapped its first #AsianGiantHornet. Press conference will be live streamed on TVW at 10 a.m. Link to the press conference is in the news release. https://t.co/NGS7EfKmj3 pic.twitter.com/5ZHmhSde67

A total of seven Asian giant hornets have been caught in the state, and all of them have been obtained from Whatcom County. Sightings of the invasive species in the American Pacific Northwest date back to December 2019.

The Asian giant hornet has been known to kill around 50 people a year in Japan, but rather than humans, other insects are the main target of the murder hornet’s instinctive wrath. During their “slaughter phase,” Asian giant hornets decapitate honeybees before taking over their hives.

The WSDA has detailed that “a few hornets can destroy a hive in a matter of hours.”

Spichiger told Reuters in December that a proliferation of this hive takeover behavior presents a possibly “catastrophic” issue for American farmers, as well as the country’s entire agricultural system.

Over 1,400 traps have been set around Washington by WSDA personnel, citizen scientists and other interested parties, according to the department’s release. The state has placed increased focus on the area in which the first male Asian giant hornet was found.

Those who have set traps have been asked to document and send the captured contents to the WSDA.

“Please do not wait until the end of the season to mail in your samples; submit them each week,” the department stressed.