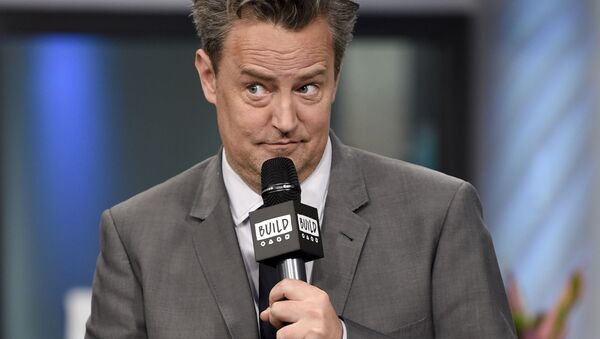 Radhika Parashar
All materialsWrite to the author
New Delhi (Sputnik): In the crisp September of 1994, directors David Crane and Marta Kauffman aired the first episode of their TV sitcom series titled “FRIENDS”. The show that ran for 10 years ended up revolutionising the concept of daily soaps worldwide. Although the entire cast of FRIENDS is dearly loved, Chandler Bing has remained “iconic”.

Matthew Perry, the brown haired charmer, fairly new to the entertainment business back in the 1990s, skyrocketed to fame with FRIENDS. The actor, who turns 51 today, essayed the role of funny-guy-next-door Chandler Bing in the series, who hailed from a broken home and was living in New York with his friends in the prime of his life, dealing with the topsy-turvy life of a twenty-something-year-old.

With his nerve-wracking sarcasm on point, Perry’s portrayal of Chandler Bing has gone down in history – which is testified by the fact that even 16 years after the show ended, fans across the world use his legendary dialogues in their day-to-day life.

The king of sarcasm was born on this day. Happy birthday @MatthewPerry , better known by his postal service name, Ms. Chanandler Bong in the classic US sitcom, F.R.I.E.N.D.S

Only Dr. Drake Ramoray Can Save Us: Joey Gets Bday Love From India Even Though He Doesn’t Share Food
FRIENDS' whole cast and Perry in particular are incredibly loved and followed in India. The show is referred to as one of the very few that have stayed relevant even as generations have changed. Content-streaming platforms like Netflix have now exposed millions of young viewers to the series and the FRIENDS fandom only seem to be going upward.

On his birthday, FRIENDS fans from India are sending heartfelt wishes to their very own “Chan-Chan Man” for letting them know that despite being “hopeless and awkward and desperate for love”, you may end up with that next-door best friend of yours and life will be alright. Pictures and quotes of Perry are flooding Twitter in India.

The king of sarcasm was born on this day. Happy birthday @MatthewPerry , better known by his postal service name, Ms. Chanandler Bong in the classic US sitcom, F.R.I.E.N.D.S

My soulmate! Happy 51st birthday! I love you more and more each day! ❤️ Thankyou for making me laugh at the worst of days and hugs for making me realise at difderent stages of life, that all will be alright.. :') In my alone time, I hang out with you guys! <3#matthewperry pic.twitter.com/YYueaiYCXg

​While shooting FRIENDS, Perry battled with pill addiction after a jet ski accident. Although he overcame the addiction, his fans noticed the physical transformation Perry has had through the years.

#matthewperry in a parking lot in LA (June 16). Pics from mlpsource on Twitter.

The actor did take on a bunch of roles after FRIENDS, like in the 2009 American comedy film titled “17 Again” – where he played the older version of heartthrob Zac Effron. His role of Chandler Bing in FRIENDS, however, has been the highlight of his lustrous career.

The show that thanks to all of you, doesn't go away.

Before the coronavirus pandemic jerked the world to a standstill, the entire cast of Friends - Jennifer Anniston, Lisa Kudrow, Courtney Cox, David Schwimmer, Matthew Perry, and LeBlanc himself - revealed on Instagram that due to public demand, they are all coming together as their famous characters one last time.

The suspense-full release of the awaited surprise reunion episode has been postponed for now due to the pandemic situation.