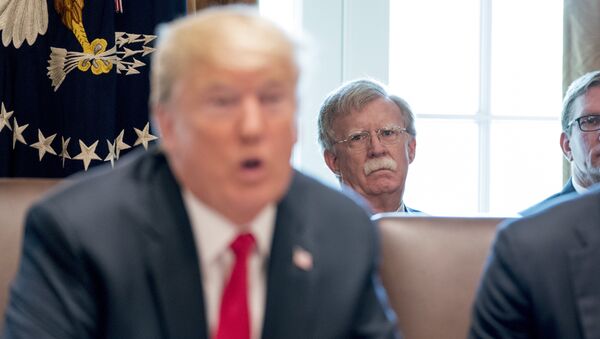 © AP Photo / Andrew Harnik
Subscribe
Max Gorbachev
All materialsWrite to the author
Bolton served in the Trump administration as the national security adviser from April 2018 until September 2019. Known for his hawkish stance on international politics, he had major disagreements with Trump, which led to his firing. Relations between the two deteriorated after Bolton published a tell-all book about the Trump administration.

Former national security adviser John Bolton said he is troubled by Donald Trump’s remark in which he suggested that the only way he is going to lose in the upcoming presidential election is if the vote is rigged. The president made the statement at a rally in Oshkosh, Wisconsin, where he warned about "fascist" Democrats with a "trojan horse". Bolton, who was once Trump’s supporter, said he was alarmed at Trump’s statement, which he compared to those made by leaders of undemocratic countries, who try to sow doubt in elections to stay in power.

"To try to say in advance that the only fair outcome is when I win is something that we should pause over", Bolton said during a talk hosted by the National Press Club.

Speaking with Fox News last month, Trump hinted that he may not accept the results of the election. Commenting on his statement, Bolton stopped short of saying that the president would indeed refuse to accept the results, but noted that Trump “may attempt anything” and that “there are no rules with the president”. At the same time, the former national security advisor said he had not seen any evidence that Trump is trying to sabotage the upcoming vote, a claim promoted by the Democrats. Last week former US ambassador to the United Nations Susan Rice alleged that Trump gave his blessing to Russian interference in the election.

Bolton called on the Republicans to accept the results of the vote no matter which side wins and noted he himself doesn’t plan to vote for either Trump or his rival Democrat Joe Biden, marking the first time ever that the staunch conservative won’t be casting his vote for the Republican nominee.

In recent months, Donald Trump has repeatedly claimed that mail voting during the upcoming presidential elections will result in election interference, as "millions of mail-in ballots will be printed by foreign countries or others". Most recently, the president claimed that universal vote by mail would be "catastrophic" and would make the United States a "laughing stock". The president said that the results of the November vote might not be known "for months or for years" because the ballots could be lost or fail to arrive in time.

Trump’s unexpected victory at the last presidential elections stunned many Democrats, which alleged that Trump colluded with Russia to influence the results of the vote. A subsequent investigation by Special Counsel Robert Mueller found no evidence that the Trump campaign colluded with the Kremlin, although it did not exonerate the president. Despite the findings of the investigation, Democrats have continued to claim that Trump became the president with the help of the Kremlin and posited that he may do it again.

Due to the severe situation with the coronavirus outbreak in the United States – the country has the highest number of cases (5.6 million) and the biggest death toll from the disease(172,000) – millions of Americans will opt for a mail-in vote.

000000
Popular comments
Why does anyone give credence or any attention to this arch neocon war criminal?