Belarus: Where a 'Dictator' is Condemned by Those Who Supported Lockdowns in Their Own Country 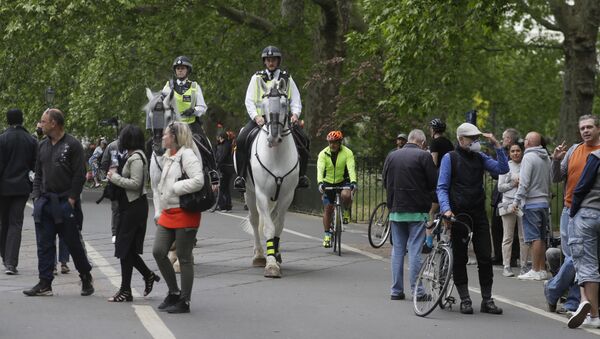 Neil Clark
All materials
The hypocrisy of western lockdown supporters advocating a "regime-change" in Belarus is off the scale. Those calling for the ouster of Lukashenko ought to be focusing on the draconian anti-democratic measures their own governments have enacted against the people in 2020.

What do you think about a policeman smashing a woman's car window and dragging her out of her car to be arrested after attending a meeting protesting the state's imposition of a draconian curfew and the curtailing of other civil liberties?

Pretty appalling, huh? But you probably haven't heard too much about it because it happened in "democratic" Australia, in Melbourne, under "Coronavirus lockdown", and not Belarus, whose President, Alexander Lukashenko is the latest non-globalist approved leader to receive the 'World's worst dictator' mantle.

Belarus didn't have a lockdown. It didn't impose "Covid curfews". It didn't make wearing face masks mandatory. In fact, Lukashenko actually claimed in June that his country had come under great pressure from international lenders, including the IMF to "do an Italy" and introduce "quarantine measures, isolation, a curfew" - pressure which he rejected.

Quite. Here’s the irony: The ´dictator’ of Belarus has made his position vulnerable by not locking down his country as the good ´democrats’ of Spain, Italy, UK, NZ etc did. https://t.co/v7LpAIAT7X

​How Orwellian therefore, in a year where much of Europe and the Anglosphere has seen entire populations ordered to stay at home, where families and loved ones have been kept apart by order of the State,  and where people are told to 'mask up' whenever they go to out or face a hefty fine, that it's one of the few countries which DIDN'T impose a lockdown or similarly restrictive 'Covid' measures- which is being singled out for special treatment by those professing to espouse "freedom".

The shocking truth is that for much of 2020 citizens of Belarus, under the "dictator" and self-confessed authoritarian Lukashenko have had more freedom in their everyday lives than those of the UK, Italy, Spain, the US and many other places. Not that the opposition in Belarus seems to appreciate what they have missed. In a programme on the US network NBC, Franak Viacorka the journalist and social media promoter of the anti-Lukashenko protests appeared to make criticism of Belarus's non-authoritarian Coronavirus policies (You can watch that here). In fact, wearing a face-mask has become a symbol of the "democratic" opposition to Lukashenko. Who would have thought that covering up your face on the order of the globalist oligarchy, would be presented as a sign of your commitment to "freedom" in 2020! We truly live in very topsy-turvy times.

´If only we can topple that dictator Lukashenko the new government can make everyone wear face-masks like we are and impose a long ‘Coronavirus’ lockdown as in other democratic countries!’ https://t.co/yvOsitiXNI

​Pointing out these double standards does not mean condoning any violence used against protestors who are peacefully demonstrating in Belarus, or indeed their imprisonment, it just puts recent events there in their proper perspective.

What the events of this year shows us quite clearly (and this seems to be beyond the comprehension of many western "liberals"), is that you can have more personal liberty under a self-confessed authoritarian leader, but who is beholden to no one, and who puts the interests of his own people first, than under a supposedly "democratic" system. A  system in which all the parties basically follow the same big bucks globalist script on the things that really matter, and who attempt to implement the totalitarian agenda of undemocratic globalist institutions, like the "World Economic Forum",  irrespective of public opinion.

That same globalist script requires fierce condemnation of the leader of Belarus, but not of those leaders of the state of Victoria, France, Spain or New Zealand, who have imposed far more restrictions on their people this year under the guise of fighting a virus. The hypocrisy has been truly breathtaking.

Lukashenko should have delayed that Belarus election. Then he would have appeared ‘magnanimous and conciliatory’. HT @IAmFrankButcher https://t.co/TdMLRpJwrq

​Just a few days after ’centrists’ and ’liberals’ were virtue-signalling their fierce denunciations of Lukashenko and calling for him to step down, the Prime Minister of New Zealand Jacina Adern, who has locked down her country's most populous city, announced she would be delaying her country’s general election.

This was called "magnanimous and conciliatory". Lukashenko really missed a trick, didn't he? Had he shut down his country for six months for Covid and said the election would be delayed, what could the western lockdowners have said? Perhaps he would have been called "magnanimous and conciliatory" too. And got a nice big loan for his country as well.