Subscribe
People have been extracting oil for many decades with the first oil wells dating back to the fourth century. The first Industrial Revolution brought not only a fast pace of social development but increased demand for oil supplies.

Nowadays, oil can be regarded as a major asset with countries extracting this resource on a massive scale to meet the needs of industry.

Sadly enough the need to fulfill this demand has brought about one of the world's largest ecological problems - the oil spill. The world has witnessed hundreds of such incidents, albeit of different sizes.

A recent major oil spill occurred just several weeks ago after the distressed Japanese cargo ship Wakashio ran aground on 26 July off Mauritius.

Following the incident, the boat began to leak oil into the ocean with satellite images showing a large dark patch in the water around the damaged ship which was estimated to be 1,000 tonnes of heavy oil.

Last week, the Mauritian prime minister stated, as quoted by the newspaper Le Mauricien, that out of the 4,180 tonnes of fuel that were on board the stricken vessel, almost 3,200 tonnes had been pumped out by rescuers at the scene.

Sputnik has gathered photos of other major oil spills from around the world. 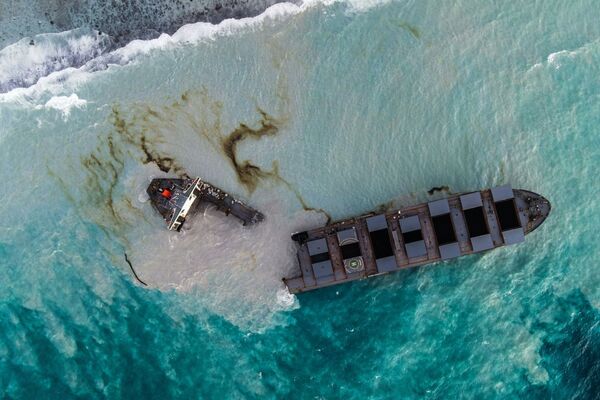 1/11
© AFP 2021 / Stringer
This aerial picture taken on 16 August 2020, shows the bulk carrier MV Wakashio that ran aground and broke into two parts near Blue Bay Marine Park, Mauritius. The ship has leaked more than 1,000 tonnes of oil into the pristine waters off the coast of Mauritius and split into two parts, according to its Japanese operator. 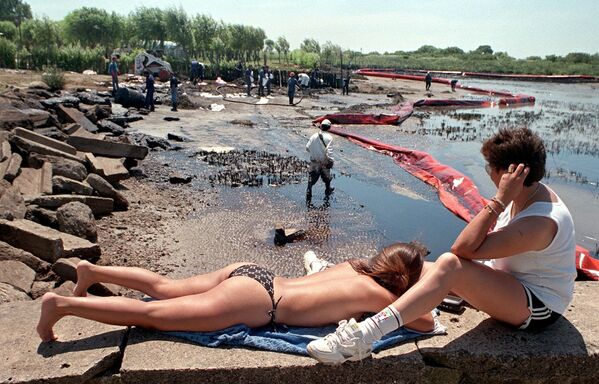 2/11
© AFP 2021 / Daniel Luna
Sunbathers watch workers clean up oil spilled on the resort beach of Playa Nueva in Magdalena, Argentina, 100 km (62 miles) south of Buenos Aires, 21 January 1999. Some 250,000 litres (65,000 gallons) of crude petroleum leaked from the Liberian oil tanker "Estrella Pampeana", carrying oil for the company Shell, when it collided with the German container ship "Sea Parana" 15 January on the Rio de la Plata. Environmental officials report that the spill will have a serious impact on the river's ecology. 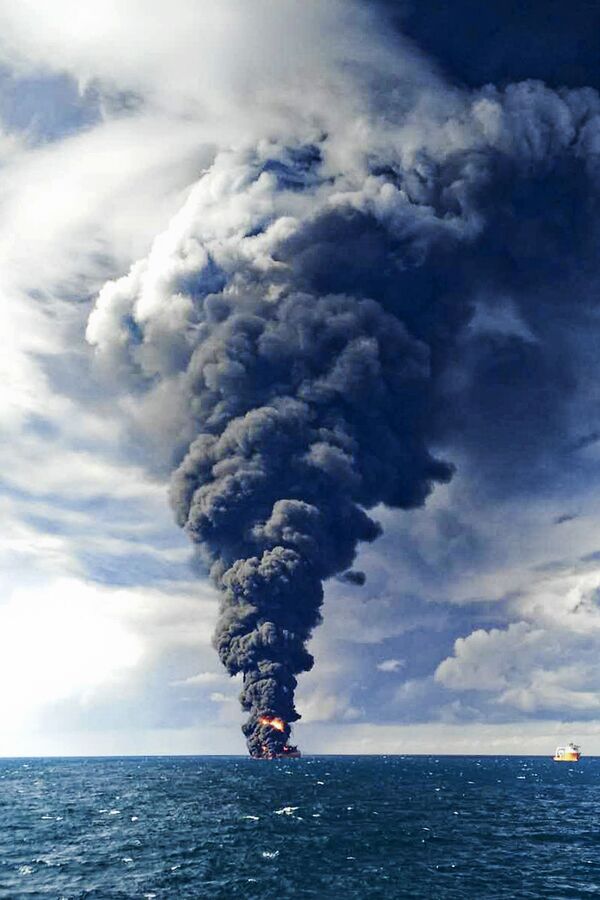 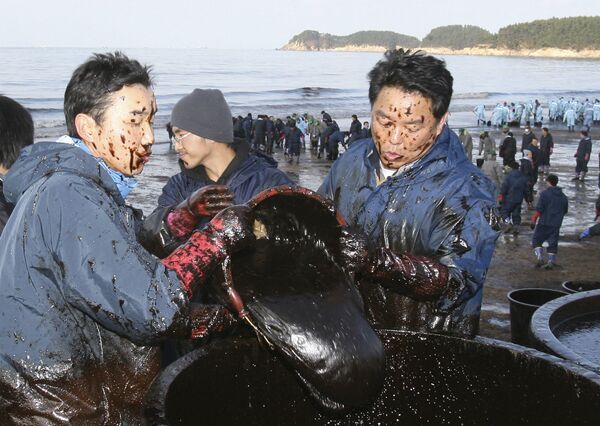 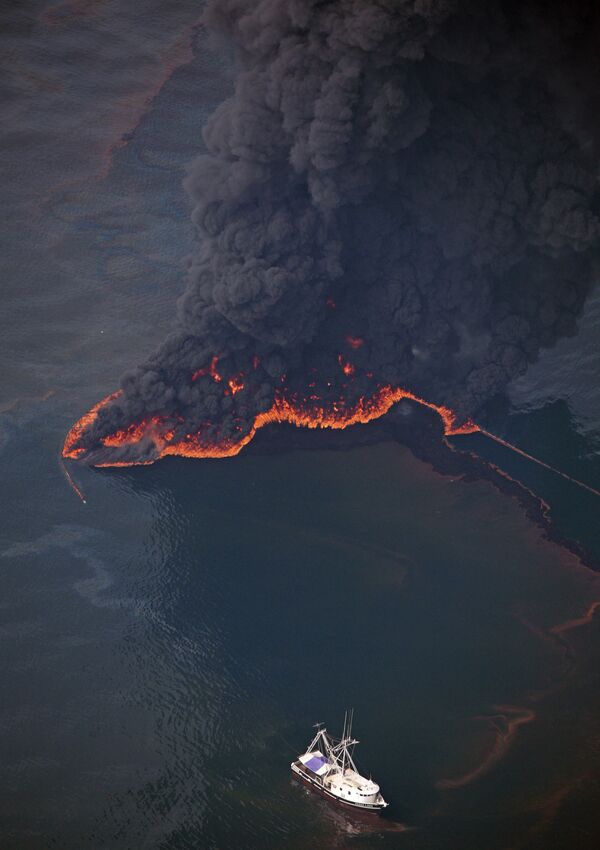 5/11
© AP Photo / Dave Martin
Oil is burned on the surface of the Gulf of Mexico a few miles from the site of the Deepwater Horizon disaster Wednesday, 16 June 2010. 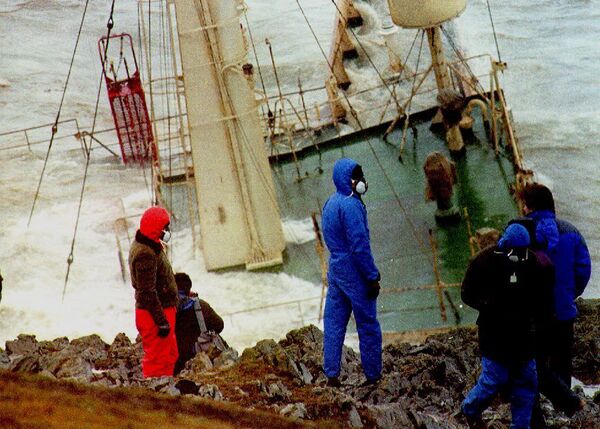 6/11
© AFP 2021 / EPA
Members of the media with masks on their faces watch the wreckage of the oil tanker Braer that ran aground during a storm off Shetland, Scotland, in January 1993 and broke up a week later following storm force winds. 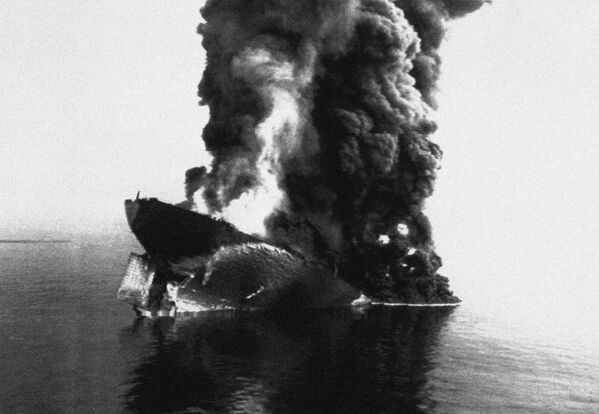 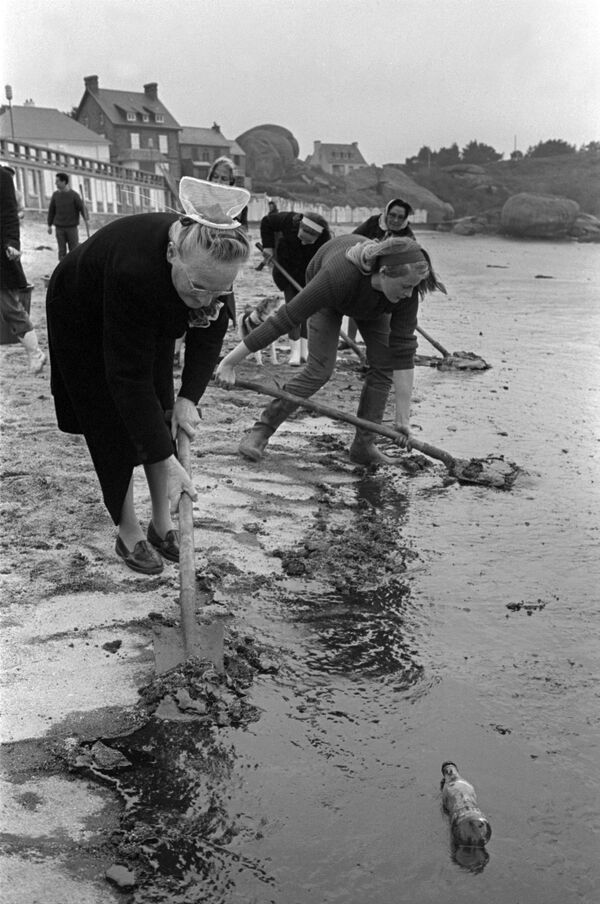 8/11
© AFP 2021
Soldiers and volunteers clean up an oil slick on 14 April 1967 on the beach at Tregastel. On 18 March 1967, owing to a navigational error, the oil tanker Torrey Canyon struck Pollard's Rock in the Seven Stones reef between the Isles of Scilly and Land's End, Cornwall, causing major environmental damage on the Cornish and French coasts. Around 120,000 tonnes of crude oil spilled out, killing about 200,000 birds. 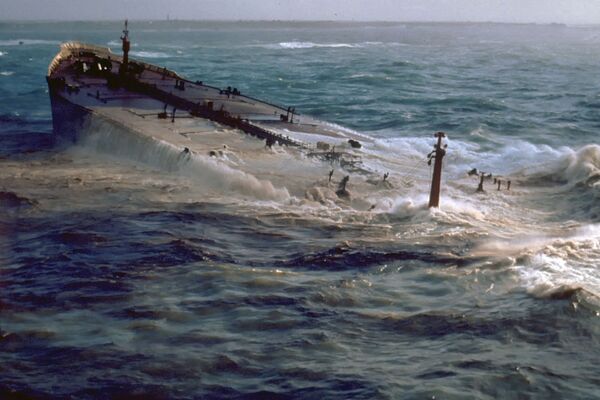 9/11
© Photo : Public domain / noaa.gov
The supertanker Amoco Cadiz is seen submerging after it ran aground on 16 March 1978 on Portsall Rocks, 5 km from the coast of Brittany, France. 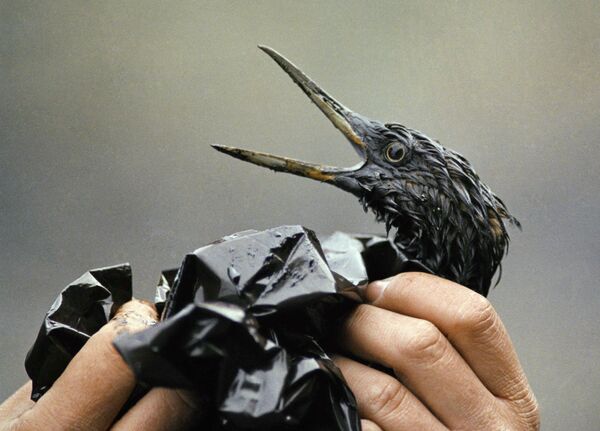 10/11
© AP Photo / Jack Smith
An oil-covered bird is examined on an island in Prince William Sound, Alaska in April 1989 following a massive oil slick that occurred after the tanker Exxon Valdez ran aground about 25 miles from Valdez, Alaska. 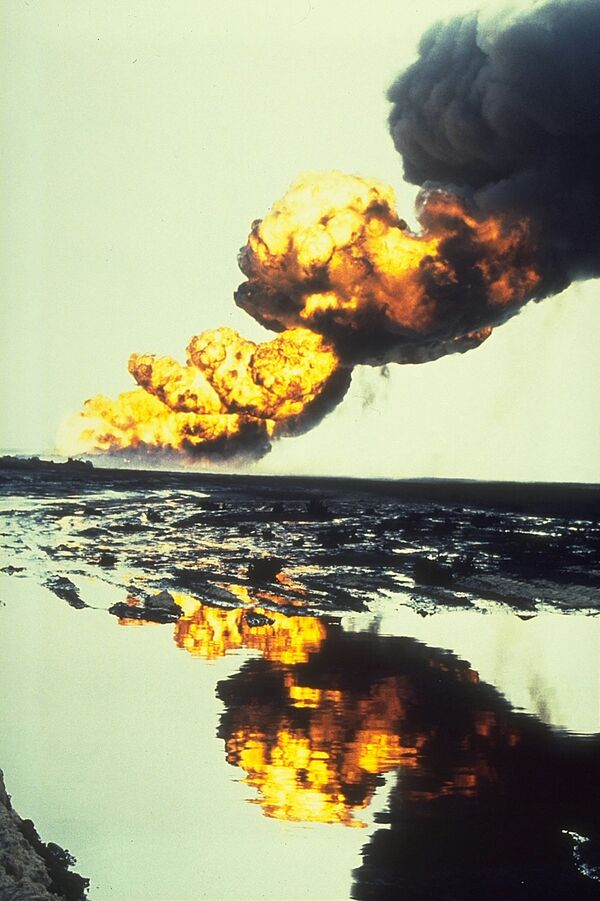