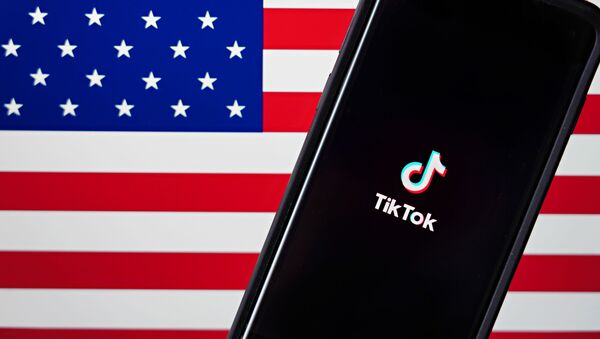 © AFP 2021 / Cindy Ord
Subscribe
WASHINGTON (Sputnik) - The Chinese video sharing platform TikTok poses little threat to US national security despite claims to the contrary by President Donald Trump when issuing an executive order banning the popular application, the Soufan Group said in a report on Tuesday.

"While the Trump order justifies the action against TikTok based on national security concerns, there is little evidence that the application represents a clear and present danger to US national security interests. The executive action, which goes into effect 45 days from August 6, not only results in a US ban of the video-sharing mobile application but will also prohibit transactions involving US persons and TikTok," the report said.

Moreover, the timing and motivations of Trump’s TikTok executive order "reek of politics and protectionism," especially during a looming election where the US president’s primary foreign policy talking point is his ability to curb growing Chinese global influence, the report said.

When the Chinese company ByteDance bought the US company Musical.ly in 2017 and later folded Musical.ly into TikTok, the report noted that the Committee on Foreign Investment in the United States (CFIUS) made no effort to review the purchase for national security concerns. However, that changed in 2019 when CIFUS began a retroactive investigation.

"At the time of the recent Trump executive order, CFIUS had yet to complete its review," the report said. "It is entirely possible that CFIUS has been unable to detect any immediate national security threat emanating from TikTok."

TikTok has been downloaded more than 175 million times in the United States, according to media reports.

000000
Popular comments
US is becoming a no brain country. Only stupidity in US political class.