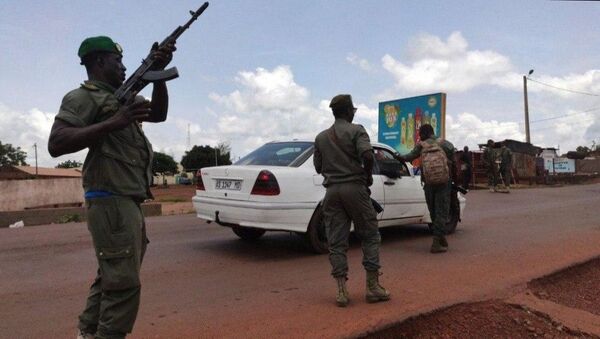 © Sputnik /
/
Go to the photo bank
Subscribe
Ilya Tsukanov
All materialsWrite to the author
Earlier Tuesday, reports coming out of the landlocked West African nation said that multiple government officials and senior army officers had been detained in the capital Bamako and the nearby Kati military base, with unrest said to have been sparked by soldiers' financial grievances.

Malian President Ibrahim Boubacar Keita and Prime Minister Soumeylou Boubeye Maiga have been arrested by the leader of mutinying troops, a military source has confirmed to Sputnik.

Earlier, the purported leader of the mutineers told AFP that "we can tell you that the president and the prime minister are under our control," adding that they were being held at Keita's residence in Bamako.

However, another military official said Keita and Maiga were in an armoured vehicle on route to the Kati base.

The mutiny by Malian military units began earlier Tuesday, with sources telling Sputnik that rebels had arrested a number of ministers and high-ranking officers, with the mutiny thought to be related to servicemen's financial grievances. Local media has reported that four military officials were responsible for organizing the mutiny. The government issued a statement signed by Maiga calling for dialogue with the mutineers.

Eyewitnesses told Sputnik that civilians have also taken to the streets of Bamako amid a lack of a security presence, with gunfire occasionally heard, and rebel soldiers firing shots in the direction of the president's residence. Mali state broadcaster ORTM has since gone offline.

"Mass demonstrations [are taking place] in the capital of Bamako amid a lack of security agencies. Demonstrators demand President Ibrahim Boubacar Keita’s resignation. Rebel soldiers are walking in the streets, greeting crowds of demonstrators on Independence Square in the downtown," one person said.

A Russian foreign ministry source told Sputnik that Moscow was 'closely following events', and checking on reports that rebels had arrested the president.

The Minister of Justice building in Bamako has been set on fire by local protesters, according to local journalists pic.twitter.com/FdgPZPTczs

"The Secretary-General calls on all Malians to preserve the integrity of the country's democratic institutions, and we affirm that together with ECOWAS [Economic Community of West African States], the African Union, the European Union and other partners, the United Nations will continue to accompany Malians in their efforts to consolidate peace and democracy," spokesman Stephane Dujarric said.

French President Emmanuel Macron condemned the mutiny, with an Elysee source telling Reuters that Macron had spoken to Mali's president and the leaders of Ivory Coast, Senegal and Niger about the situation in the country.

The United States and the Economic Community of West African States (ECOWAS) have also condemned the events.

France has now joined the US, & ECOWAS in condemning the possible mutiny is unfolding in #Mali. Also interesting is the attention Turkish accounts are paying to events in Mali. Perhaps the geopolitical anxiety between France and Turkey in Mediterranean & Libya has shifted South?. https://t.co/1uknufniQs

Tuesday's unrest comes in the wake of the ongoing political crisis in the West African nation, with supporters of the opposition 'June 5 Movement' taking to the streets to demand Keita's resignation starting earlier this summer. Clashes July 11-12 between protesters and security forces led to the deaths of 11 people, with over 120 reported injured. The opposition accuses Keita of failing to deal with corruption and restore security in the country amid escalating jihadist and inter-communal violence, and has criticized controversial legislative elections in late March, which were reportedly accompanied by kidnappings and death threats against observers and local officials.

29 Malian troops were killed in a terrorist attack in the country's northeast in March, with 20 others killed at the Sokolo military camp in the country's center in January. The situation in Mali was destablized in 2012 after Tuareg militants seized areas in the country's north, with the conflict escalating further due to the presence of local Islamists, the ongoing civil war in neighbouring Libya, and French intervention. In February, France announced plans to send an additional 600 troops to West Africa to join the 4,500 troops already there to fight terrorists in the Sahara and Sahel regions.

000000
Popular comments
And...if any gringos at base...arrest them immediately. Then invite China and Russia in to help.

The Whistler
18 August 2020, 20:14 GMT
000000
Mali's "peace and democracy" have been disrupted by US placement of huge drone-warfare base in the country. No mention of this by UN spokesperson or Associated Free Press news-report...