Lebanese President Rules Out Resignation in Wake of Beirut Blast 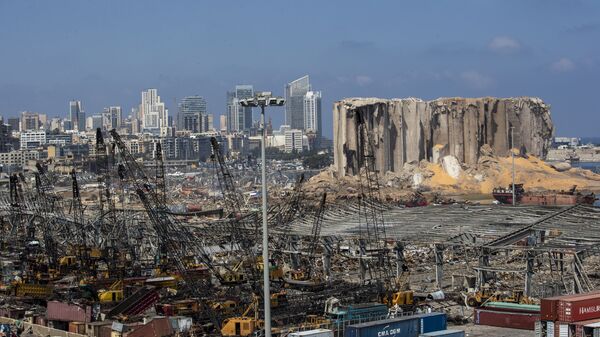 © AP Photo / Hassan Ammar
Subscribe
International
India
Africa
ROME (Sputnik) - Lebanese President Michel Aoun will not follow the government’s lead and will not step down in the wake of the devastating blast that ripped through the capital, he told Italy’s Corriere Della Sera.

"I am staying in my position. If I left, there would be chaos," Aoun said.

The president also reiterated his opposition to the idea of creating an international commission to probe the August 4 blast.

"Our constitution requires that our judicial system itself investigate internal problems. This does not rule out the presence of French, American and other investigators who are already helping our police," the president said in the interview published late on Monday.

Speaking on the causes of the explosion, Aoun reaffirmed that all versions of what happened are being investigated, although the most likely one is that it was an accident.

"Many Lebanese witnesses claim that they had seen or heard planes [flying] shortly before the blast. They should be listened to, even if they [claims] may not be very credible. Even if it seems to have been an accident, I would not like to be accused of not listening to every voice," Aoun stated.

The president also categorically rejected the theory that an initial blast had broken out in a Hezbollah arms depot, which led to a larger explosion of ammonium nitrate.

"This is impossible ... We know that Hezbollah does not have weapons depots in the port. However, this link will also be studied," Aoun said.

Hezbollah Leader: Israel 'Will Pay The Price' if It Turns Out Tel Aviv Was Behind Beirut Blast
The massive blast, caused by improper storage of explosive ammonium nitrate in the Beirut port, brought widespread destruction and left 178 people killed and thousands more injured.

The Lebanese government declared a state of emergency in the capital and resigned less than a week later, following public anger that caused thousands of protesters to take to the streets of Beirut.

Aoun, who was elected by parliament in 2016 for a six-year term, explained that he does not wish to create "an institutional vacuum." As for legislative elections, they can be held within a year or six months, according to the president.