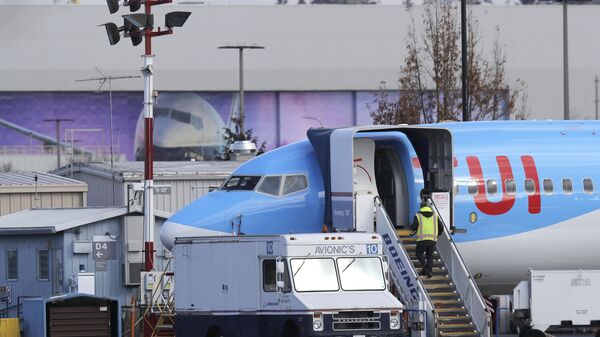 Demond Cureton
All materialsWrite to the author
The development comes as the Chicago-based aerospace giant faces severe challenges and revenue losses from the ongoing coronavirus pandemic and ongoing 737 MAX crisis.

Boeing Co is mulling laying off more workers beyond its 10 percent estimates set in April, a top executive in the company reportedly said on Tuesday.

Mr Calhoun said in a memo as reported by Bloomberg that the troubled firm would offer a second round of voluntary buyouts to "align to our new reality, preserve liquidity, and position ourselves for the eventual return to growth."

“We anticipate seeing a significantly smaller marketplace over the next three years," he added.

The report added that Boeing was re-evaluating its workforce amid the economic downturn, namely by reducing staff to roughly 19,000, despite hiring new employees in space travel and defence as commercial revenues continue to plummet.

Executives from eight defence firms, including Raytheon, BAE Systems and Northrop Grumman, also urged the US government in an open letter in July to provide billions in added funds amid the pandemic.

Pentagon is BAE: Defence Firm CEOs Send Letters to US Gov't for Up to $15bn COVID-19 Lifeline
The troubled aviation firm was battered by the ongoing COVID-19 pandemic, forcing the company to lay off roughly 6,700 staff in May, as well as plans to scale back production of its flagship 737 MAX, 777X and 787 Dreamliner models.

The company also raised $25bn USD in liquidity amid declining sales but reported $2.4bn in losses in its Q2 reports in late July while announcing it would also retire its iconic 'Queen of the Skies' 747 model.

Problems for the firm erupted in March last year after errors in the 737 MAX's Manoeuvring Characteristics Augmentation System caused two crashes in Indonesia and Ethiopia, killing 346 people. The disaster prompted the Federal Aviation Administration to launch an investigations on the aircraft's safety and a lengthy battle to recertify the plane.