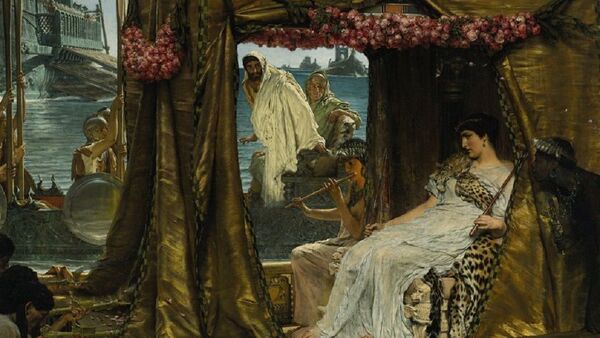 Andrei Dergalin
All materialsWrite to the author
Archaeological excavations at the temple site in question also led to the discovery of ancient Roman military equipment, reportedly the first such find in that particular area.

Dr Kathleen Martinez, an archaeologist who "dedicated her life" to discovering the elusive tomb of the legendary Cleopatra, ended up stumbling on a baffling find in her quest, the Daily Express reports.

Having surmised that the final resting place of the last ruler of the Ptolemaic Kingdom is likely located in an ancient temple site about 30 miles outside of Alexandria, the Taposiris Magna, Martinez made a number of finds in that area that appear to support her theory, such as "200 royal coins depicting the queen’s face and the remains of two high-status Egyptian mummies", the newspaper notes citing the Channel 5 documentary "The Hunt for Cleopatra’s Tomb".

However, as Dr Martinez discovered that while the monument that became the focus of her search "is surrounded by tombs of the richest members of society", the excavations also revealed something that Egyptologist and the feature's presenter Dr Glenn Godenho said he has "never seen anything quite like it before" – a stone sarcophagus, buried underneath a causeway leading to "the lighthouse tomb" located within the area, that contained non-mummified human remains.

"Human remains, possibly acting as guardians to a tomb, seems unique. The ground’s made of limestones and the Egyptians have carved mummy coffins into the limestone itself", Egyptologist and presenter Dr Glenn Godenho said. "They don’t appear to be mummified, just skeletal remains there now, and there could be more to be discovered, too. It’s something we don’t see anywhere else in Egypt, so the questions are, who are these people, how do they relate to the tomb owners and possibly, how do they relate to Cleopatra herself?"

While Dr Martinez's efforts focused her attention on the "lighthouse monument", she also ended up discovering "various Roman military equipment" during her search, reportedly describing it as "the first of its kind".

"This is a Roman military kit and it’s the first found at Taposiris Magma, it’s another crucial link to the Ptolemaic dynasty", Godenho remarked.