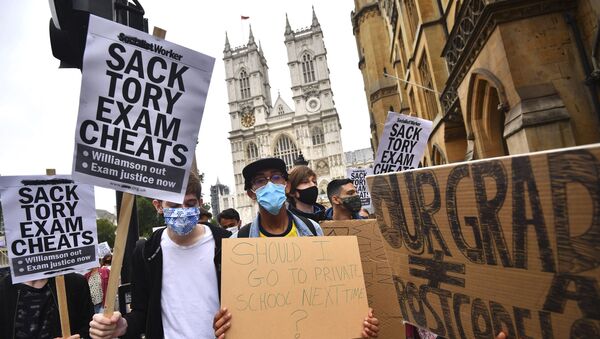 © AP Photo / Victoria Jones/PA
Subscribe
Svetlana Ekimenko
All materialsWrite to the author
The scandal around England's A-Level grading system and its controversial algorithm spiraled over the weekend, as the exams regulator withdrew its earlier announced policy for mock exam results to be considered as the basis of students’ appeals, leaving many Britons slated to miss out on their chosen university courses.

UK Prime Minister Boris Johnson has been urged to swiftly address the brewing scandal surrounding the "unfairness" of England's A-level grading system by Conservative MPs, as problems with the issue spiraled over the weekend, writes The Times.

The MPs are reported as having complained to their whips over the contentious issue of the new computer algorithm, labelled by some as "Kafkaesque", used to determine students' A-level results this year after the coronavirus pandemic and resulting lockdown prompted British schools and colleges to cancel GCSE and A-level exams. 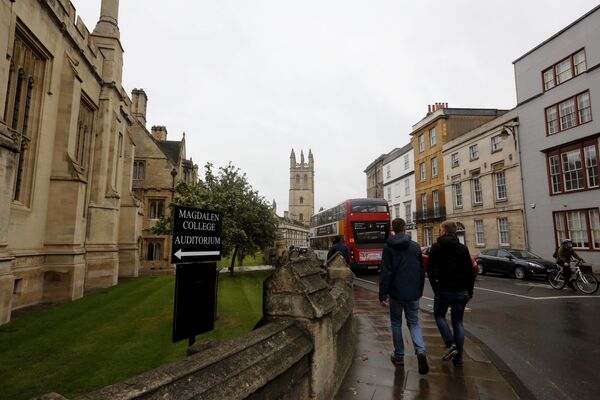 Instead, students were left to rely on formal grades, meant to reflect their performance.

Thousands of Britons, however, saw their hopes of getting into the universities of their choice dashed once they got the results of their A-levels, receiving lower-than-expected grades due to the algorithm developed by the exam's regulator.

Concerns have been voiced that the system is biased against disadvantaged pupils, running counter to Boris Johnson's earlier announced ambitious intention to "level up" the nation.

"There will be a lot of youngsters who will say this is the opposite of a level-up agenda. We may pay a price for that", said former Brexit secretary David Davis.

Calls have been made for the government to follow in Scotland's footsteps, where downgrades were scrapped after a similar situation, and replaced with the higher estimates submitted by teachers.

Tory MP Sir Robert Syms warned that unless dealt with fast, the problem ran the real risk of putting Tory MPs "on the warpath".

"In December people voted for Boris Johnson to run the country, not an algorithm. What's happening was avoidable. We saw what happened in Scotland, they got themselves in a hole then got themselves out. We seem to have gone headfirst in and are still digging", said the MP.

The Tory MP was cited as suggesting that the government ought to "err on the side of allowing grade inflation in the current circumstances",

"The government is defending Ofqual; I'm not sure it should be. It should be on the side of hard-working students and families", said Sir Robert Syms.

As the government was slammed for sowing "chaos, confusion, and incompetence", the PM has been urged by Labour to "take personal responsibility" for resolving the A-level grading problem. 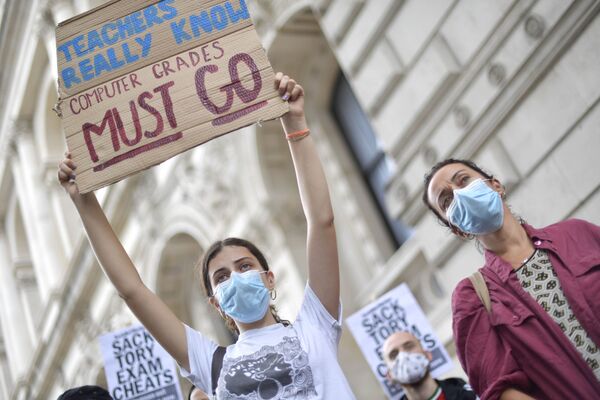 Robert Halfon, Conservative chairman of the Education Select Committee, was cited as saying:

"This is a huge mess. Goodness knows what is going on at Ofqual. It sows confusion among pupils, head teachers, school teachers. It's the last thing we need at this time. We want a Ronseal appeals system, not Kafkaesque exam grades that no one understands. This is just unacceptable".

Former Scottish Conservative leader Ruth Davidson underscored that the situation was "something that cuts through to everyone", adding:

UK Education Secretary Gavin Williamson has been defending the algorithm, saying there would be "no U-turns". The touted Scottish model was dismissed by him as potentially leading to "rampant grade inflation".

According to sources cited by the publication, Williamson and Ofqual were split on the appeals and algorithm issue, with some of the regulator's officials prepared to abandon the algorithm and use teachers' grades.

While the current confusion is yet to be resolved, the Department for Education stated:

The exams regulator for England, Ofqual, had generated confusion and indignation among students, parents, and teachers after it withdrew its own advice on how to appeal against grades, claiming it was “being reviewed” by its board, just hours after it was published.

The original guidance, made public at 3 p.m. on Saturday, stated grades from mock exams and coursework could be resorted to when challenging results that had been downgraded by the computer algorithm.

Teachers' predicted grades were to be used if it was lower than the mock exam grade, in what appeared to be a significant concession over the issue.

However, at 10:15 p.m. Ofqual suspended the guidance without further explanation.

The outcry was initially occurred after almost 39 percent of England's A-level results – the qualifications Britons require to get into higher education – were pushed down by one grade or more by the new algorithm.

A-level grades were awarded to pupils using an algorithm that took into account teachers' predictions, mock exam results, and the results of people who took the exam at the same schools during the last three years: from 2016 to 2019.

According to the approach, a school was anticipated to perform the same, on average, in a subject as it has across previous years.

What rendered the system controversial was that it also appears to have "punished" students from lower-ranking institutions whose performance was better than their school's average.

In line with data by Ofqual, private schools showed much better scores, with their share of A* and As soaring by 4.7 percent this year, while a rise of 2 percent was registered at state comprehensive schools, and 0.3 percent at state sixth form colleges.

In their defence, the regulators claimed that using solely teachers' recommendations would have yielded "implausibly high" results.

After the A-level results were released, teachers in England had two in five of their A-level assessments adjusted downward by the statistical model.

Accordingly, after failing to score the needed grades, almost 280,000 students are now fated to miss out on their chosen university courses.

000000
Popular comments
Basing individual assessment results on the local area results or school averages is statistically unsound and obviously unfair since it assumes standardised bell curves based on samples that are too small. Mock exams also known as 'formative assessments' are a more reliable system of determining individual results although there are problems associated with this; students may not have given their best during formative assessments because they were formative. They may also have learnt more after sitting formative tests, particularly if the formative assessments were held early in the school year. Combining formative assessments with teacher estimates is more reliable, although teachers may be subject to teacher bias, and inclined to artificially raise student achievements. Teacher assessments need to moderated which may help but not alleviate teacher bias. In any event the inclusion of local averages is clearly unsound and should be abandoned.