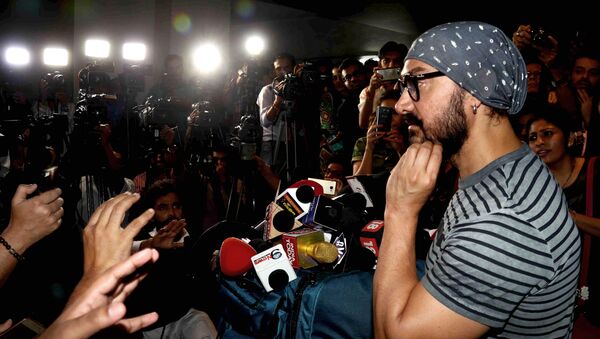 Shweta Sharma
Sputnik correspondent
All materialsWrite to the author
New Delhi (Sputnik): The first lady of Turkey Emine Erdogan expressed her happiness at meeting Indian actor Aamir Khan. She shared pictures of the the two bonding at the Presidential residence in Istanbul.

Bollywood’s Aamir Khan, who is currently in Turkey to finish shooting his upcoming film “Laal Singh Chaddha”, has stirred a debate in India by meeting the country's First Lady Emine Erdogan amid soured relations between the two countries.

Khan was slammed online for meeting the wife of Turkish President Recep Tayyip Erdogan, who has remained vocal in criticising India’s move to change the temporary special status of Jammu and Kashmir in August 2019. Turkey also joined Pakistan in opposing the New Delhi government’s Citizenship Amendment Act, a law that provides a path to Indian citizenship for illegal immigrants of six "persecuted" minorities from three neighbouring Islamic countries, while not giving the same eligibility to Muslims.

I had the great pleasure of meeting @aamir_khan, the world-renowned Indian actor, filmmaker, and director, in Istanbul. I was happy to learn that Aamir decided to wrap up the shooting of his latest movie ‘Laal Singh Chaddha’ in different parts of Turkey. I look forward to it! pic.twitter.com/3rSCMmAOMW

Many roasted Khan, labelling him as “anti-national” for meeting the wife of the Turkish president.

Some person informed me that you had not wished people on our 74th #IndependenceDay. I couldn’t believe it because you have been otherwise very particular on wishing people on such occasions.

But then it came out to be true. 😀

​Others said they will boycott his upcoming films and slammed him for a controversial statement he made in 2015 in which he said he was thinking about "moving move out of India" over growing intolerance.

I must applaud @aamir_khan for his incredible journey from Satyamev Jayate to meeting Emine Erdogan, the first lady of Turkey who sides with Pakistan on Kashmir issue.

Yes, you must not feel safe in India.

However, many sided with the actor, saying the meeting is being used for political debate and it is normal for an actor to meet the head of state if he is shooting a film in the country.

Vishva Hindu Parishad, a Hindu consolidation organisation, slammed Khan, claiming there are some actors who "feel proud to meet countries like anti-India Turkey" despite getting so much love in India.

“Those people whom the Indian audience treated so well and turned them into actors, today they feel proud to meet countries like anti-India Turkey. So, it is quite natural for the Indian audience to feel hurt. We will have to think,” said Vinod Bansal, national spokesperson of the VHP.

The 55-year-old actor, who has been nicknamed "Mr. Perfectionist" for his vow to make only one movie in a year in order to deliver quality work, was shooting his movie 'Laal Singh Chaddha' - a remake of the Hollywood flick Forest Gump, before the lockdown came into force at the end of March. The movie is scheduled for release in December.