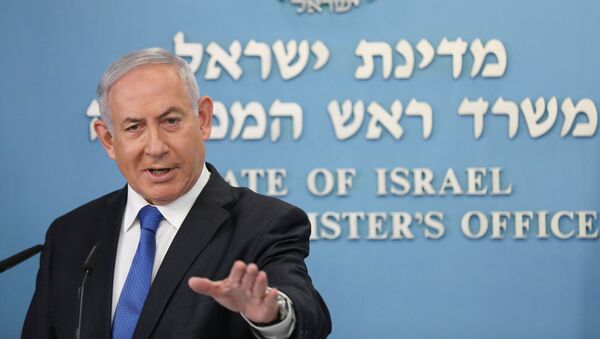 The United Arab Emirates (UAE) and Israel on Thursday agreed to sign a treaty to begin the process of normalising relations, in a deal said to have been brokered by US President Donald Trump. The Israeli Prime Minister claims that the new relationship between Abu Dhabi and Tel Aviv will lead to an agreement with the Palestinians.

Israeli Prime Minister Benjamin Netanyahu on Sunday said that a normalising of relations with the United Arab Emirates shows that Arab countries will not be "held hostage by the Palestinians".

In an interview with Fox News' Eric Shawn, Netanyahu enthusiastically celebrated the promise of the treaty and hoped for a prosperous future between Israel and its Arab neighbors.

​“If we join forces we can do wonderful things, limitless things,” he said, "for the benefit of our people, their well-being, and for their security. All I could tell you is I have been talking to Arab leaders," he said, in reference to a visit he recently made to Oman. "I can tell you that’s not the only meeting that I’ve had in the region".

Netanyahu did not specify which leaders he met with but suggested that relations could improve with other countries.

The Israeli PM said that the deal with the UAE - the first with a Gulf state - is "good for peace, good for security, good for prosperity" and described both counties as "two of the most advanced economies in the world" and "two of the most moderate" countries that share the common goal of opposing Iran and terrorism".

Netanyahu suggested that Israel's drive against Iran was appealing to Gulf countries who have been involved in historic conflicts with the Islamic republic.

Netanyahu asserted that countries that once considered Israel an enemy could now see an "indispensable ally" in Tel Aviv.

"I think Arab countries are coming around to see that they can’t be held hostage by the Palestinians," he stated, adding that countries in the Middle East have "their own interests to develop peace with Israel, to exchange technology, to exchange things like the coronavirus vaccine development".

The Tel Aviv PM also said that relying on the Palestinians to "veto on peace" between Israel and the Arab world would not allow an agreement to be possible, as, he claims, the Palestinian Authority is not interested in a "realistic settlement".

Netanyahu called the Trump plans "the only realistic proposal" in decades, predicting that peaceful relations between Tel Aviv  and the Arab world would lead to the Palestinians accepting Israeli regional policies "in a more realistic way".

3. If Palestinians refuse to negotiate, their position weakens. Time against Palestinians, not Israel. pic.twitter.com/gVvMs1M6hP

​While those Arab countries thought by the Israeli PM to be considering a move toward more cordial relations with Tel Aviv were not mentioned by name, Oman and Bahrain are known to have expressed support for a renewed arrangement with the UAE, as has Egypt, which normalised relations with Israel in 1979. The only other Arab country to do the same is Jordan in 1994.

Arab nations have historically held ending the Israeli encroachment on Palestinian territory as a prerequisite to normalised relations. Many Gulf states, including the UAE, have maintained de facto relations with Tel Aviv due to a shared alliance with the US.