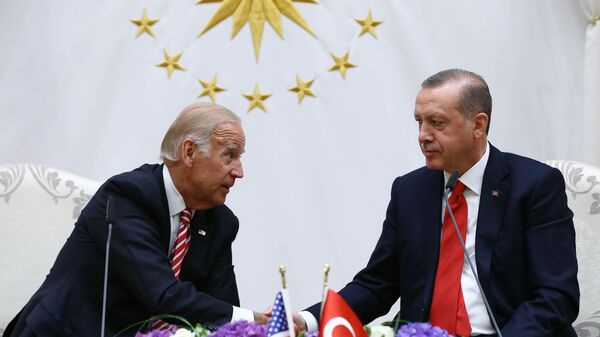 Biden, a fierce advocate against so-called 'Russian meddling', has openly said that the US should work to unseat the Turkish president and make sure he “pays the price” for daring to cooperate with Russia.

Turkey has accused Joe Biden of meddling in its internal affairs after an interview emerged in which the Democratic presidential candidate flirts with the idea of unseating Recep Tayyip Erdogan.

“US Presidential candidate Joe Biden’s remarks (made in December but reported by the media today) reflect the games being played over Turkey and their interventionist attitudes,” Erdogan’s spokesman Fahrettin Altun tweeted on Saturday.

He added that Biden’s plans regarding Erdogan were “not in line with democracy” and suggested that the Trump administration would find them “unseemly”.

We believe that the current US administration would find these undiplomatic remarks unseemly of a presidential candidate of our NATO ally. Turkey is not a country that can be made a tool in domestic political games.

​The comments came in response to a resurfaced clip of Joe Biden, which was filmed in January as part of his interview to The New York Times.

Biden, then a Democratic front-runner in the presidential race, said in the video that the United States should be “making it clear that we support opposition leadership” in Turkey.

The former vice president added that Washington should “'embolden' the Turkish opposition to get more from them and to be able to take on and defeat Erdogan”. He clarified that Erdogan should not be defeated in a “coup” but rather “by the electoral process”.

He also brought up the Turkish president’s refusal to drop a Russian military hardware deal despite continued pressure from Washington. Turkey received the first batch of Russia’s S-400 air defence systems last year and agreed this June to buy a second one.

The United States in response removed Turkey from its F-35 fighter jets programme, quietly froze arms sales to the country and threatened it with economic sanctions.

“He has to pay a price. He has to pay a price for whether or not we’re going to continue to sell certain weapons to him,” Biden said of Erdogan. “In fact, if he has the air defence system that they’re flying F-15s through to see how they can try to figure out how to do it.”

Joe Biden – a member of the Obama administration, which enabled the war in Syria with its risk-averse approach and strengthened Turkey’s Kurdish enemy PKK and its Syrian offshoot PYD – has publicly clashed with Erdogan in the past.

In 2014, the then-vice president was forced to apologise to Erdogan for saying that Turkey was to blame for the strengthening of jihadists in Syria and Iraq.