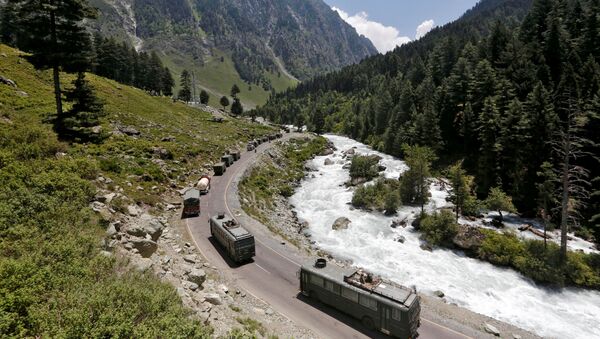 © REUTERS / Danish Ismail
Subscribe
International
India
Africa
New Delhi (Sputnik): India’s main opposition Congress party has been critical of Prime Minister Narendra Modi’s policies, including the handling of recent border skirmishes with China, in which Indian 20 soldiers were killed. Congress has also been critical of the government's claim that China did not occupy or intrude into Indian territory.

“Everybody believes in the capability and valour of the Indian army. Except the PM: Whose cowardice allowed China to take our land. Whose lies will ensure they keep it,” said Gandhi’s tweet.

​Rahul Gandhi’s accusation came a day after Modi said, “...there have been misadventures along the border which threw a challenge to the country”. Addressing the nation on Saturday to commemorate India's Independence Day, Modi said, “...whoever tried to threaten the sovereignty of our country right from the LoC (de facto border with Pakistan) to the LAC (border with China), the army of the country, our brave soldiers have given a befitting reply.”

The Congress Party had questioned Modi for not naming China in his Independence Day speech, and wanted the government to clarify how it proposed to push back Chinese forces occupying Indian Territory.

On Friday, Rahul Gandhi had accused India’s federal government that it was “scared to face up to Chinese intentions in Ladakh”. He said the evidence on the ground indicated that Beijing was preparing and positioning itself in the region. “The PM’s personal lack of courage and the media’s silence will result in India paying a huge price,” he had challenged.

While Modi has been maintaining that “China did not enter our territory, no posts taken,” a document by the Indian Defence Ministry had confirmed the intrusion. The document was however, removed from the website of the ministry later.

In one of the worst face-offs with the Chinese army, on 15 June, the Indian army lost 20 soldiers, including an officer. There were reports that the People’s Liberation Army of China had also suffered casualties.

India and China have unresolved border disputes over Arunachal Pradesh in the northeast and in Ladakh. Both have been engaged in dialogues to resolve the issue, but so far there has been no success.

The India-China border covers the 3,488 km-long Line of Actual Control (LAC), which mainly is a land border in most regions, but in Pangong Tso in Eastern Ladakh it passes through a lake. India controls the western portion of the 45-km long lake, while the rest is under Chinese control. Most of the clashes between the two countries have taken place in the Galwan Valley.