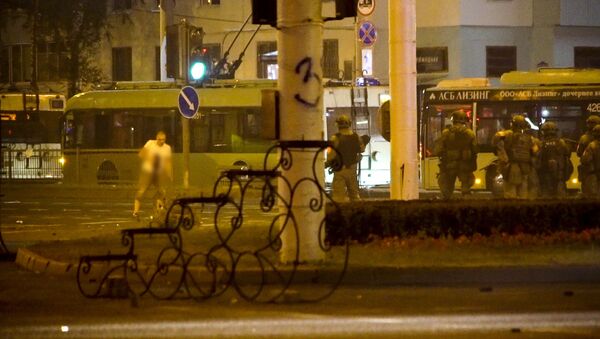 Egor Efimchik
All materials
According to multiple videos of the incident, the man was unarmed and approached law enforcement officers seconds before collapsing on the ground. Authorities insist that he died after an explosive device, which he intended to throw at the police, blew up in his hands.

Poland-based Euroradio has published a video (WARNING: the following footage contains images viewers may find disturbing) presumably showing the moment a protester was killed during clashes in Minsk, Belarus, on 10 August.

The man, wearing a white T-shirt and shorts, is seen walking toward a line of armed Spetsnaz officers with his hands up at Pushkinskaya subway station (click here to view). He then turns to the right after what appears to be a rifle shot.

The video cuts while the man is staggering on his feet. A zoom-in version is also available online.

Other videos of the incident show the man collapse to the ground seconds later before officers approach his body.

According to footage released by the AP and another shot from another angle, the protester had visible bloodstains on his shirt.

The Belarusian Interior Ministry said the man died after an IED blew up in his hands while he tried to throw it at the police.

The demonstrator has been identified as Alexander Taraikovsky, 34. According to the authorities, he had previously been sentenced to 7 years in prison on a charge of causing grievous bodily harm.

His widow has disputed the official version of events, insisting that Taraikovsky had no injuries that may have been left by an explosive device.

Thousands of people attended a funeral for Taraikovsky in Minsk on Saturday; an impromptu memorial appeared near the place where he died.

Protests erupted across the country on Sunday, 9 August, after early results from the election commission handed an easy victory to the country’s long-time president, Alexander Lukashenko.

Opponents of the incumbent have alleged mass election fraud, citing numerous ballots, which showed that a majority of voters supported the protest candidate, Svetlana Tikhanovskaya. 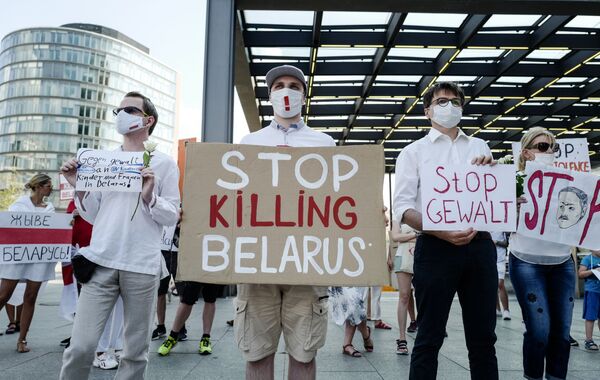 A protester holds a sign reading "Stop Killing Belarus" during a demonstration on the contested elections in Belarus in Berlin, on August 15, 2020.
© AFP 2022 / JOHN MACDOUGALL

There is at least one audiotape, which purports to show a Belarusian official coercing polling station workers into switching Lukashenko’s poor numbers with the winning Tikhanovskaya. Authorities are yet to confirm the authenticity of the tape, although members of the polling station said it was genuine.

Tikhanovskaya, the wife of a popular blogger who originally intended to run for president but has been in custody since May on charges of organising civil unrest, has challenged the results and called for a “peaceful” transfer of power.

She fled to Lithuania on 11 August, claiming the authorities had threatened to go after her children. Another opposition leader, Lukashenko’s former ally and ambassador Valery Tsepkalo, fled to Ukraine facing charges of bribery in Belarus. A third would-be candidate, banker Viktor Babariko, has been detained since June on suspicion of embezzlement and fraud.

Lukashenko was eventually declared the winner with more than 80 percent of the vote. He denies charges of vote-rigging and refuses to hold another election, saying that Belarus will otherwise “die as a state, as a nation”. 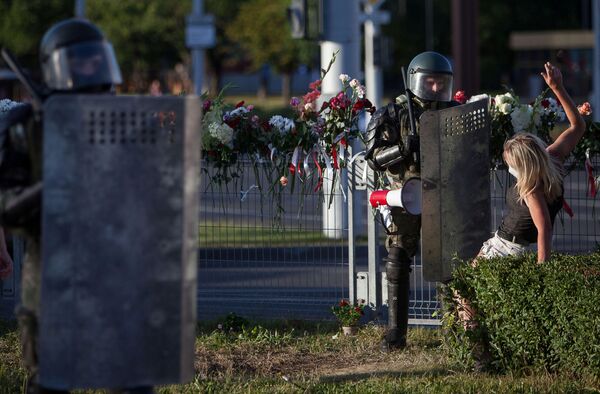 A woman interacts with a Belarusian law enforcement officer near the site where a protester died on August 10 during a rally following the presidential election in Minsk, Belarus August 11, 2020
© REUTERS / STRINGER

After initial clashes with police, protests have been largely peaceful, with people now demanding to stop police violence and release all the detainees. A number of key industrial companies have gone on strike demanding Lukashenko’s resignation.

The embattled president has warned about a build-up of NATO forces on Belarus’ western borders, a claim Lithuania said was a “lie”. The European Union has refused to acknowledge the election results, threatening sanctions against Belarusian officials.

Lukashenko – who has so far successfully maneuvered between Russia and the EU for years – said on Saturday that Russian President Vladimir Putin had promised to provide “comprehensive security assistance” to ensure security in Belarus if need be.