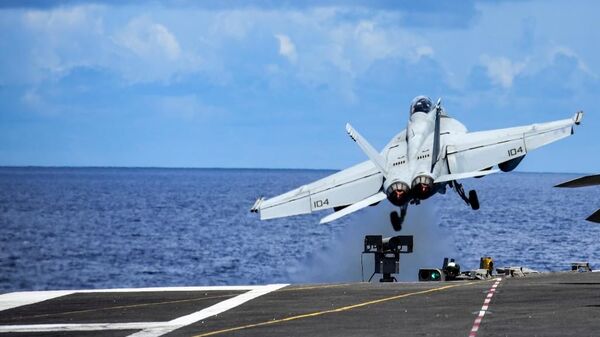 Ilya Tsukanov
All materialsWrite to the author
The United States stepped up its military activity in the South China Sea in 2010, when then-Secretary of State Hillary Clinton called the body of water a matter of ‘US national interest’. Since then, the US Navy has carried out regular ‘freedom of navigation’ missions in the area, to Beijing’s chagrin.

The USS Ronald Reagan carrier strike group carried out exercises in the South China Sea on Friday, including flight drills and anti-air defence training, the US Navy has announced.

Emphasising that the drills were carried out “in support of the free and open Indo-Pacific,” the Navy also noted that in addition to operations involving the USS Ronald Reagan, its aircraft and support ships, drills also included integration with a US Air Force B-1B Lancer strategic bomber flying out of Guam for “Joint War at Sea training” to enhance “joint readiness capabilities”.

China lays claim to about nine tenths of the South China Sea, with Vietnam, Malaysia, Brunei, the Philippines and Taiwan making claims to parts of the strategic body of water closer to their own shores. The territorial dispute centres around strategic shipping, fishing and energy resources, and dates back to the immediate post-World War 2 period. China and the ASEAN group of nations began negotiating on a ‘code of conduct’ for the region in 2002, but little progress has been made since the early 2010s amid ongoing US ‘freedom of navigation’ missions throughout the area.

The US Navy drills were held amid tensions between the US and China on a broad range of issues, from the South China Sea dispute to trade, the coronavirus, a tit-for-tat diplomatic spat involving the closure of consulates in Houston and Chengdu, and US criticism of Chinese policy in Hong Kong and Taiwan.

Last week, Xu Guangyu, a senior retired People’s Liberation Army general and advisor to the China Arms Control and Disarmament Association, told the Global Times that if Washington continued to expand its links with Taiwan’s ‘secessionist authority’, “the PLA could take more countermeasures, including live-fire missile drills east of Taiwan Island and near Guam.”

On Friday, the Pentagon finalised a contract for the sale of 66 F-16 fighter jets to Taiwan, notwithstanding Chinese concerns that US arms sales to the island “severely violate the one-China principle”.

Guam, a key US naval and air base in the Pacific, has been at the centre of strategic concerns for the Pentagon amid China’s deployment of new ‘carrier-killing’ weapons such as the Dongfeng-26 intermediate-range ballistic missile, which is reportedly capable of striking the island from the Chinese mainland, thereby endangering US naval operations throughout the Western Pacific.