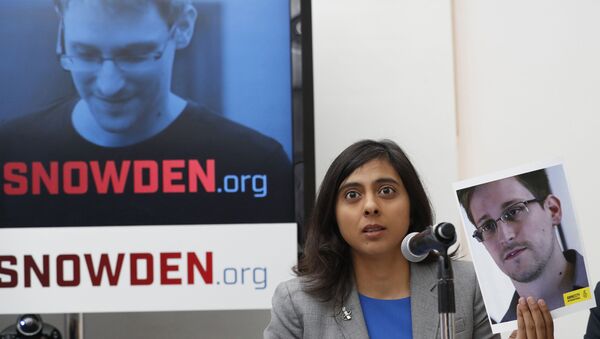 Edward Snowden, a former Central Intelligence Agency (CIA) employee who became a whistleblower, revealing the illegal spying practices conducted by US intelligence agencies, has been living in Russia since 2013. He is wanted in the United States on charges of espionage and treason.

US President Donald Trump said on Saturday while speaking at a press conference that he was "going to look at it", when asked about the possibility of pardoning Edward Snowden, a former CIA agent and NSA contractor, who fled the US after leaking classified documents showing that the National Security Agency had been collecting telephone records on millions of US citizens.

Trump claimed that he was "not that aware of the Snowden situation" but he was "going to look at it".

"There are many, many people. It seems to be a split decision. The many people think that he should be somehow treated differently. And other people think he did very bad things. And I'm going to take a very good look at it. I have seen people that are very conservative and very liberal and they agree on the same issue and they agree both ways", Trump said.

Snowden, who has been in Russia since 2013, submitted documents for extending his Russian residence permit by three more years in April 2020.

In 2019, Snowden argued that he would return to the United States if he were guaranteed a fair trial on espionage charges.

In September 2019, Snowden published a new memoir, Permanent Record. The same month, the US Department of Justice filed a lawsuit against him, alleging that the former intelligence officer violated NSA non-disclosure agreements that he signed before working as a subcontractor.

Additionally, US authorities said in the complaint that since Snowden gained popularity due to the appropriation of government information, he does not have the right to receive profits from that data that was published in the memoir.

In June 2013, Snowden handed over to The Washington Post and Guardian newspapers large amounts of classified material about mass surveillance programs that collected telephone, email and internet browsing data on nearly everyone in the United States, despite US law prohibiting spying on Americans without a court order. Following Snowden’s revelations, the US Congress passed the Freedom Act in 2015, significantly restraining the legality of mass data collection of US citizens.