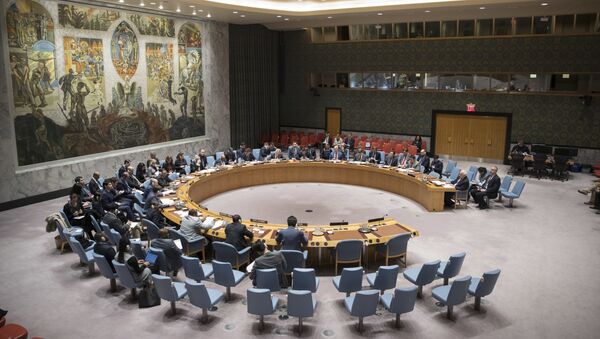 WASHINGTON (Sputnik) - The US considers the UN Security Council the best place to discuss the arms embargo against Tehran, a State Department spokesperson said, commenting on the proposal by Russian President Vladimir Putin to hold an online conference of leaders of the UNSC states, Germany, and Iran to discuss the Persian Gulf and Iran.

"The United States has for the last 19 months sought to foster dialogue and discussion with Russia and other Security Council members on extending the UN arms embargo. Russia has repeatedly, and puzzlingly, claimed there is no legitimate basis to discuss extending the UN arms embargo at the UN Security Council and has refused to negotiate on any of the texts we proposed," the spokesperson said.

"The United States believes strongly that the Security Council is the best place to have discussions related to extending the UN arms embargo, and we have the benefit of 13 years of Security Council precedent on our side," the spokesperson added.

Putin invited the UNSC members, Germany and Iran to agree on the date and agenda as soon as possible.

The Russian president said his administration presented a roadmap for restoring security in the Persian Gulf last year that could propose ways for "efficiently dealing with the knot of problems in the region."

Commenting on possible participation in the proposed summit, US President Donald Trump said on Friday that he had not yet been told about Putin’s proposal.

Also on Friday, the Security Council president for the month of July, Dian Triansyah Djani, said that the draft resolution aiming to indefinitely extend the arms embargo on Iran envisioned by the Iran nuclear deal ahead of its expiration in October did not obtain the needed support to become adopted. The draft resolution was supported only by two members, the United States and the Dominican Republican, while China and Russia voted against and 11 others abstained.

The almost unanimous refusal of the UN Security Council members to support the US-sponsored draft resolution on extending the arms embargo against Tehran is evidence that international law exists, the Russian Foreign Ministry said on Saturday.

The ministry added that for Russia, interaction within the Security Council did not mean a clash of ambitions but a responsible joint work for the sake of maintaining and strengthening international peace and security, while Washington's desire to push for the anti-Iranian embargo has nothing to do with this goal.

Washington first announced its plans to seek an extension to the UN arms embargo — which expires on October 18 this coming fall — in May. In June, the US lodged the initial draft resolution, asking that countries halt all sales of weapons to Iran, as well as in no way facilitate the use or sale of arms by Iran. Earlier this week, US Envoy to the United Nations Kelly Craft said that Washington had lodged a new version of its draft resolution to the UN Security Council to request an indefinite extension of the embargo.