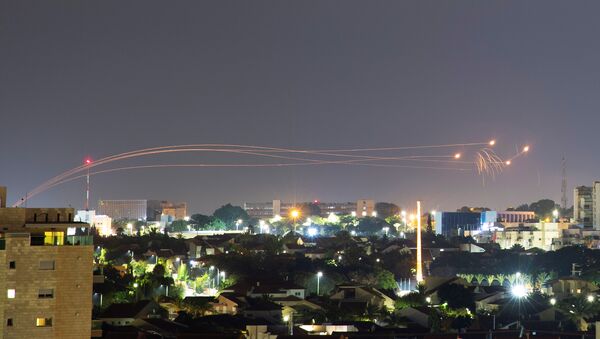 © REUTERS / AMIR COHEN
Subscribe
International
India
Africa
Daria Bedenko
All materialsWrite to the author
Earlier in the day, the Israeli Defence Forces (IDF) said in a statement that "Palestinian rioters" in Gaza "hurled explosives & attempted to approach the security fence" leading to Israel.

The Israeli Defence Forces, in the early hours of Sunday morning, announced that rocket alert sirens had been heard in southern Israel as a result of two rockets fired by what the IDF claimed were "terrorists in Gaza" into the country.

Both rockets were said to have been intercepted by the IDF's Iron Dome Aerial Defense System.

Videos allegedly showing the rockets fired at Israel from the Gaza Strip were shared in social media.

​Earlier in the day, the IDF claimed that "Palestinian rioters" in Gaza "hurled explosives & attempted to approach the security fence", the Palestinian boundary with Israel.

On late Friday, IDF struck Hamas facilities in the Gaza Strip, claiming that "terrorists launched explosive balloons" as "families in southern Israel enjoyed the weekend". According to the IDF, Tel Aviv faced several such attacks during the week, responding with airstrikes.

Following the incidents with the balloons, Israel closed the Kerem Shalom checkpoint on the border with the enclave, with only humanitarian cargo and fuel delivery allowed. However, later on Thursday, Tel Aviv stopped all fuel deliveries through the checkpoint as well.

Israel remains in conflict with Hamas, a militant Palestinian Sunni organization in control of much of the Gaza Strip, and holds it accountable for every attack that comes from the area.