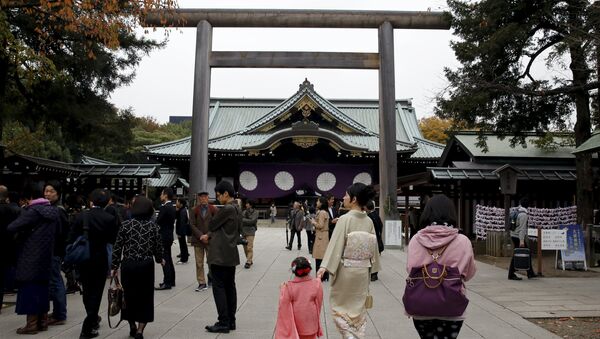 © REUTERS / Toru Hanai
Subscribe
Svetlana Ekimenko
All materialsWrite to the author
Emperor Hirohito publicly announced the surrender of Imperial Japan in the Second World War on 15 August 1945, known as Victory in Japan (VJ) Day in the United Kingdom and several other countries, including Australia, Canada, New Zealand, North Korea, South Korea and The Netherlands.

Japanese Prime Minister Shinzo Abe has vowed to “never repeat the tragedy of war” as he addressed an official ceremony for the war dead on the 75th anniversary of Japan’s World War Two surrender.

“We will continue to remain committed to this resolute pledge,” said Abe on Saturday at the ceremony that was comparatively low-key due to the ongoing COVID-19 outbreak.

Abe echoed the sentiments expressed by the grandson of Emperor Hirohito, Emperor Naruhito, who voiced “deep remorse” over his country’s wartime history.

“I earnestly hope that the ravages of war will never again be repeated,” said Naruhito, 60, at the official ceremony.

With no more than 600 people, including relatives of war dead, in attendance, seats were spaced out to comply with social distancing protocols, reported Reuters. 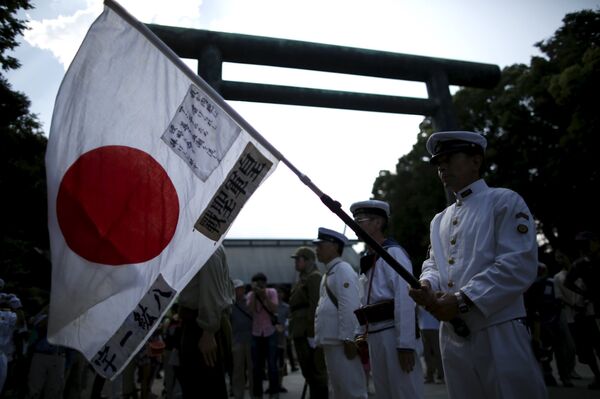 On this day in 1945 Emperor Hirohito publicly announced the surrender of Imperial Japan in World War II.
The announcement followed the US atomic bombings of Hiroshima and Nagasaki and the routing of Japanese ground forces in Manchuria by the Red Army. 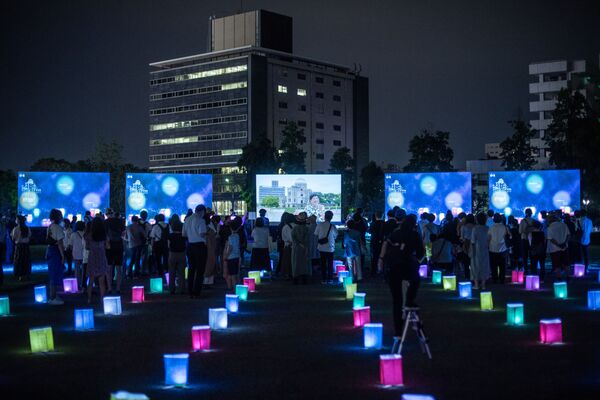 Visitors watch a screen (back C) displaying virtual lanterns as paper lanterns are placed to mark the 75th anniversary of the atomic bombing, at a park in in Hiroshima on August 6, 2020. - Japan on August 6, 2020 marked 75 years since the world's first atomic bomb attack, with the COVID-19 coronavirus pandemic forcing a scaling back of annual ceremonies to commemorate the victims.
© AFP 2021 / PHILIP FONG

While the surrender document was formally signed on 2 September, 15 August  is marked as Victory in Japan Day (VJ Day) in a number of countries, such as the United Kingdom, Australia, Canada, New Zealand, North Korea, South Korea and The Netherlands.

While avoiding a personal visit to Tokyo’s Yasukuni Shrine for war dead, Shinzo Abe sent a traditional ritual offering timed to the ceremony.

At least four Japanese cabinet ministers, however, were reported as having paid their respects at Yasukuni.
Of the 2,466,532 people contained in the shrine's Book of Souls, 1,068 were convicted of war crimes by a post-World War II tribunal, with 14 convicted Class A war criminals. 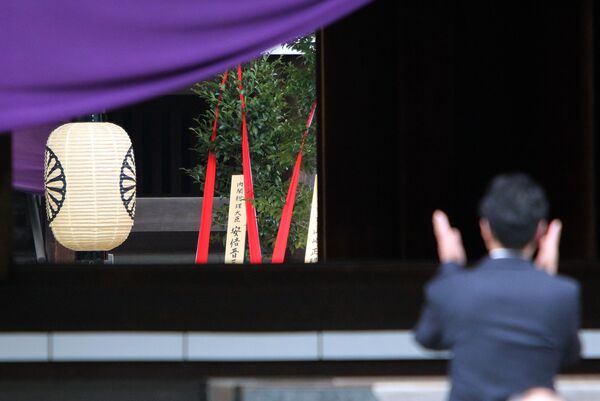 Beijing and Seoul regard the shrine as a symbol of Japan’s past military aggression.

A member of Shinzo Abe’s ruling Liberal Democratic Party, Shuichi Takatori, was cited as having acknowledged he made the ritual offering on behalf of Shinzo Abe as party leader, delivering the message that the Prime Minister “paid his respects from the heart to the war dead and prayed for the rest and permanent peace of their souls.”

After a visit in person to the shrine in December 2013 visit inflamed sentiments in China and South Korea, Abe has avoided visits to the site, dispatching offerings instead.

On this occasion, a spokesperson for South Korea’s foreign ministry voiced “deep disappointment and concern” over the Japanese ministers’ visit, urging the country’s leaders to show their “deep remorse through action”.

000000
Popular comments
It's not up to Japan to not repeat the WWII. Gringos could bring it on them without their say so.

kernel.panic999
15 August 2020, 17:34 GMT2
000000
Japanese government staff was a disgrace on defeat not dignity, no nothing. They were so traumatized by the two bombs that begged General McArthur (USA) to accept total submission and even ask that they do not want any army forces, and never pursue any nuke for the future. Indeed the only these Japanese lack to do is to link the shoes of this general. All the bravado of the Japanese (Japan beat Russia 30 years ago and destroyed the Russian Navy in these shores) just melted away. Fear of Stalin forces and the collapse of the Japanese Royal family and Communism push them to beg the USA army to intervene. The USA intervene by shooting down two nukes.