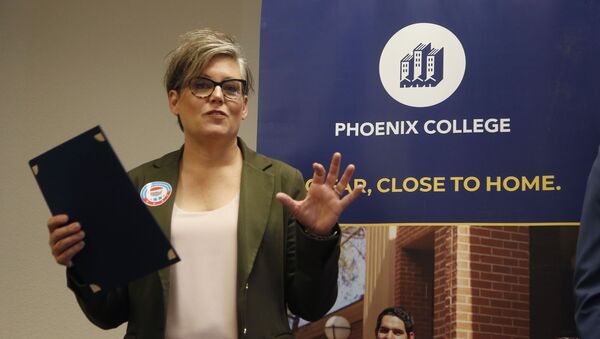 © AP Photo / Ross D. Franklin
Subscribe
Ilya Tsukanov
All materialsWrite to the author
President Donald Trump stepped out against increasing funding to the US Postal Service by $3.5 billion for mail-in voting as part of the latest congressional coronavirus relief legislation package, alleging that mail-in ballots are rife for possible fraud.

Secretary of State Katie Hobbs, the official in charge of Arizona’s elections, has suggested that President Trump may be illegally trying to sabotage Arizona’s mail-in voting plans in November, and has asked the attorney general to start a probe into the matter.

“In Arizona, it’s against the law to ‘delay the delivery of a ballot’,” Hobbs said via Twitter. “I’ve asked Attorney General [Mark] Brnovich to investigate recent changes at USPS, and whether or not the Trump administration has committed a crime,” she added.

Hobbs accompanied the tweet with a scanned copy of her letter to Brnovich.

In Arizona, it’s against the law to “delay the delivery of a ballot.” I’ve asked Attorney General Brnovich to investigate recent changes at USPS, and whether or not the Trump administration has committed a crime. pic.twitter.com/fwEV86RIIT

In the letter, Hobbs points to mail-in voting’s “long and successful history in Arizona,” and to its “non-partisan” nature.

“But recent changes at the United States Postal Service (USPS) are deeply troubling, and coupled with recent comments from President Trump, may have implications under Arizona law, which make it a crime to ‘knowingly delay the delivery of a ballot’. I write today to ask that the Election Integrity Unit investigate whether President Trump, and others at his direction, has conspired to violate [the law],” she wrote.

The ‘recent changes’ Hobbs refers relate to US Postmaster General Louis DeJoy’s August 7 announcement  about organizational changes at the USPS ostensibly aimed at reducing costs but which critics claim may cause problems with states’ plans to increase the use of mail-in ballots amid the coronavirus pandemic.

“The effect of these changes, taken individually or together, is an extended transit period for mail,” Hobbs continues in her letter. “The timing of such changes – just months before a major election in which a record number are expected to rely on USPS when exercising their fundamental right to vote – would be conspicuous on its own. Taken with comments from President Trump however, it’s clear that something more may be afoot here,” she adds, referring to Trump’s recent tweets and spoken remarks that mail-in ballots may lead to mass fraud.

President Trump has repeatedly attacked the idea of the widespread use of mail-in ballots in recent weeks, calling them a “disaster” and warning that Americans ‘may never learn the results’ of the 2020 race if they’re widely used. Trump has pointed to studies, including some by his Democratic opponents, showing mail in voting to be rife for fraud and organizational calamity, and has threatened to withdraw federal funding for states planning to use them in November.

Trump has also emphasized, however, that his beef isn’t with absentee ballots, which he as praised as “a great thing” which he plans on using himself.

Demonstration Takes Place Outside Postmaster General's DC Home Over USPS Restructuring - Video
Trump’s opponents have accused him of using the mail-in voting issue to be enable him to challenge the results of November’s election should he lose.

Recent studies by both liberal and conservative media and think tanks have shown that mail-in ballots do carry the danger of increased fraud, since they are not actively supervised by election officials, and are therefore easier to steal, forge, or alter. Other issues, including ballots arriving late or being rejected due to improperly filled out paperwork, have also been mentioned.

Last week, Federal Election Commission Commissioner Elle Weintraub warned that there was a “substantial” risk that Americans may not learn the results of the November election by the end of the day that it’s held due to the extra time necessary to count mail-in ballots, and has urged Congress to allocate more money to the USPS.

In July, the USPS quietly warned election officials in 46 states plus Washington DC, that some mail-in ballots might not be delivered in time to be counted.

Democratic politicians have wholeheartedly endorsed mail-in voting, expecting it to increase voting by minorities and the poor who would have otherwise avoided taking part in the election.