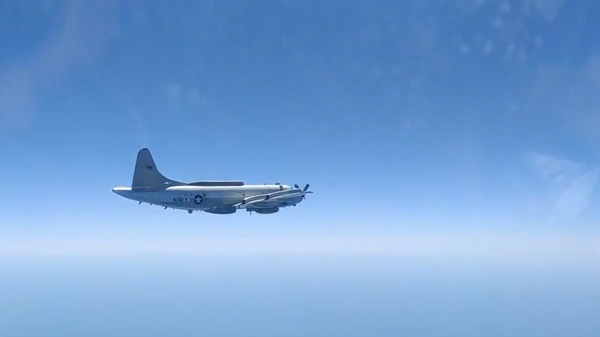 Russia’s Defence Ministry has released footage of the August 15 interception of a US Navy reconnaissance aircraft over the Black Sea.

The video, filmed from inside the cockpit of the Russian jet shows the US turboprop aircraft in flight, its US NAVY markings clearly visible, with the Su-27 flying steadily several hundred meters away from the US plane.

#Footage On August 15, another #USNavy reconnaissance aircraft – #ЕР3ЕAries – was escorted off the Russian State Border by the #SouthernMD on-duty #Su27 fighter over the neutral waters of the #BlackSea https://t.co/34waxJYwAd pic.twitter.com/x3bUtf86al

The MoD reported on the incident earlier Saturday, saying that the Su-27 had been scrambled after the US aircraft was picked up by Russian radars, and adding that the EP-3E changed course after being approached by the Russian plane.

The Russian military has reported a dramatic uptick in incidents of US and other NATO aircraft probing Russia’s defences in the Black, Baltic and Barents Seas, as well as the Sea of Okhotsk and Sea of Japan in Russia’s Far East in recent weeks. At least three similar incidents have been reported in the last week alone.