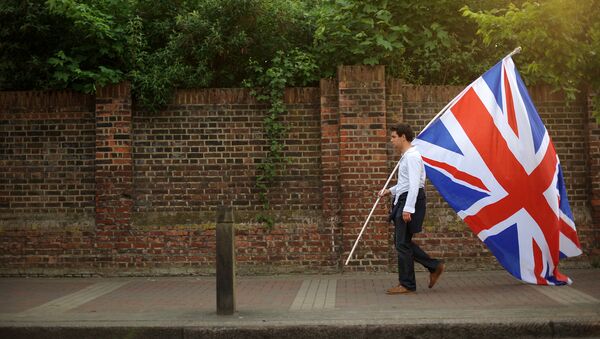 Evgeny Mikhaylov
All materialsWrite to the author
Relations between the constituent countries of the UK (especially between Scotland and England) have been strained since the Brexit referendum, becoming more sensitive recently amid disagreements over pandemic restrictions.

All major projects in Scotland funded directly by the UK government will be stamped with the Union Jack - the UK's national flag - starting next year, The Telegraph reported, citing Conservative politicians.

According to Scottish Conservative leader Douglas Ross, the flag will be used instead of the EU symbol when denoting a bridge or a road funded by the central government, showing a "visual connection" between London and its investments in Scotland.

"We should be unashamed of our direct investment in communities across Scotland... We will see that, through the shared prosperity fund, that is the money that the EU used to earmark for projects in Scotland and other parts of the UK", Ross told The Telegraph on the Chopper's Politics podcast. 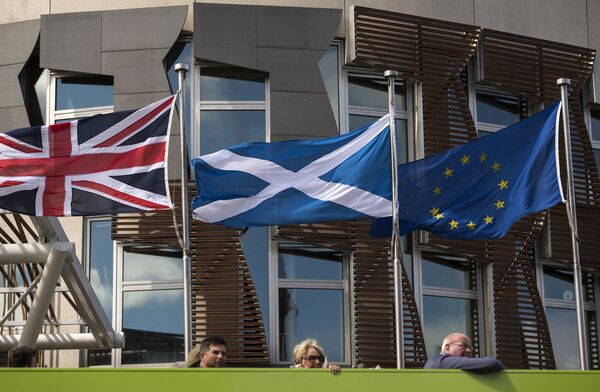 A Scottish Saltire (C) flies between a Union flag (L) and a European Union (EU) flag in front of the Scottish Parliament building in Edinburgh, Scotland on June 27, 2016.
© AFP 2022 / Oli Scarff

"If they could have an EU flag on it, why not have the United Kingdom flag on it to show that here is an example of our two governments in Scotland, working together, and the UK Government delivering for individual communities and projects the length and breadth of the country?"

Ross also criticised supporters of the Scottish National Party who may dislike the British flag, stating that they "never got upset about seeing a European Union flag sitting alongside the Saltire [Scottish St Andrew's Cross]".

Secretary of State for Scotland Alister Jack confirmed that the idea had been signed by both PM Boris Johnson and Chancellor Michael Gove, noting that when it comes to joint projects for central and the local governments, both the Union Jack and the Saltire banner will be used.

Senior SNP MP Tommy Sheppard slammed the plans as "foolish, and political tokenism and posturing of the worst order", adding that the government won't get anything by "trying to force the union flag down people's throats".