Tragedy for Some, Victory for Others: Has Israel's Pull-Out Improved Life in Gaza? 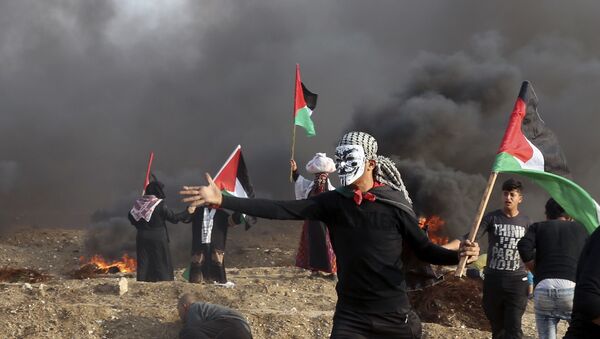 © AP Photo / Adel Hana
Subscribe
Elizabeth Blade
All materials
In 2005, Israel withdrew from the Gaza Strip after it was unable to sustain attacks by Palestinian terrorists. While the move is regarded as a national distater in some Israeli circles, for Palestinians it was a cause for celebration.

For many Israelis August 2005 was a national disaster.

On the morning of 15 August, the IDF entered Jewish settlements dispersed around the Gaza Strip to force residents to leave their homes. After 8 days of the so-called disengagement, all 22 Israeli communities were wiped off the map.

But for Mohammed Al-Astal, a 60-year-old Palestinian from Deir Al-Balah, the Israeli pull-out from the enclave was a reason to celebrate.

"I was very happy when I heard the news", said the man, who used to reside close to what was once known as Gush Katif, a bloc of 17 Jewish settlements located in the southern Gaza Strip. "For me, it meant that I could restore my freedom [of movement - ed.], I could cultivate my land, and I could build my own house without asking the permission of the IDF".

After the abolition of martial law in the West Bank and the Gaza Strip in the 1960s, Palestinians were given general permission to enter Israel for business or personal purposes. But in 1991, following the outbreak of the First Intifada, that permit was revoked.

15 Years On, Ex-Mossad and IDF Top Brass Still at Odds Over Decision to Disengage From Gaza
The Second Intifada in the early 2000s didn't improve the Palestinian chances for freedom of movement, and as terror attacks piled up, Israel stepped up its military presence in the West Bank and Gaza.

Until 2005, Israel maintained two military divisions in the Strip with up to 20,000 soldiers in each. Their sole purpose was to secure and protect the 8,600 Jewish settlers residing in the area and that often came at the expense of the Palestinian population residing there.

Mohammed's family, for example, was not allowed to build their own house as they were too close to the settlers, very often they were denied access to their farms and the general feeling, he says, was that of "a prison cell" despite glimpses of coexistence that occurred from time to time.

"Everything depended on the situation on the ground. If there was quiet, we coexisted not because we loved to, but simply because we wanted to cultivate our lands. We were hostages of the settlers and at times we were subject to their attacks, especially when there was an escalation of tensions".

Jewish settlers, however, were also prone to attacks.

From the beginning of the Second Intifada until 2005, Palestinian terrorists killed more than 80 Israelis inside the Gaza Strip. Jewish settlements also faced a barrage of mortar shells and between the aforementioned period the authorities registered nearly 2,500 attacks.

"Our resistance was strong and [then-Prime Minister Ariel - ed.] Sharon did not succeed in controlling the Gazans. Nor did he manage to contain the wave of our uprising".

No Hope in Sight

Yet, the much-anticipated pull-out did not bring Palestinians the stability they were hoping for.

A year after the disengagement, the Palestinians held their second legislative elections and despite estimations, Hamas, an Islamic group deemed a terrorist organisation by Israel, won that vote, defeating its main rival Fatah.

15 Years After Israeli Disengagement, Ex-Gaza Settler Opens Up On Life and Memories He Left Behind
Some time later, in 2007, Hamas tightened its grip over the Gaza Strip, when it ousted Fatah officials, establishing full control over the area, prompting Israel to impose a blockade over the enclave, a move that pushed many into unemployment and poverty.

Hamas was determined to fight that siege. Over the years it  has improved its intelligence gathering capabilities, increased the amount of recruits, dug deeper and more sophisticated tunnels, and developed rockets able to reach remote areas of the Jewish state, not just its nearby southern communities.

The year 2008 showed the Jewish state what Hamas was truly capable of. As the amount of indiscriminate rocket fire from Gaza on Israeli towns and villages intensified, Israel launched Operation Cast Lead to bring quiet to its southern communities at the frontlines of the Palestinian attacks.

But it also brought havoc to the Palestinians. More than a thousand Palestinians were killed during the operation. Over 3,500 homes were completely destroyed and 20,000 people became refugees.

Other Israeli military operations in Gaza (in 2012 and 2014) exacerbated the situation even further and in 2019 the UN found that nearly 40 percent of Gazans lived in poverty, 54 percent were food insecure, and 75 percent relied on international aid.

"Fifteen years after Israel left Gaza, the situation is still bad. Neither Hamas nor Fatah has managed to improve our living conditions, they care more about inner fights and bickering than improving the economy", said Mohammed referring to the ongoing dispute between the two main Palestinian factions that have been at odds since the takeover of Hamas in 2007.

But despite the dire economic conditions, Mohammed says he would never go back to the days when Israel was "the boss" in in the neighbourhood.

"I would never want to see the return of those days and I am sure Israel would not want to be in that situation either".