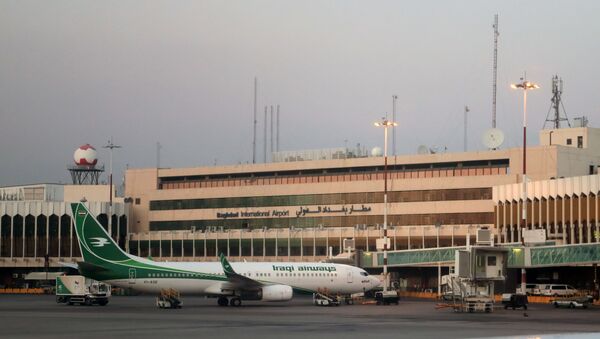 Irina Acheeva
correspondent
All materialsWrite to the author
Iraq’s Taji military base as well as Baghdad's International Airport and the so-called Green Zone in the Iraqi capital, where government buildings and embassies are located, have repeatedly come under rocket fire.

Three rockets have fallen in the vicinity of Baghdad International Airport, without causing any damages or casualties, the Iraqi military said in a statement, according to Reuters.

Homemade missile launchers regularly target Baghdad's International Airport, which is adjacent to a military airfield. As a rule, such incidents do not lead to casualties among the population and do not result in significant damage.

On 30 July, two rockets that were launched from two sites in the Radwaniyah district in western Baghdad fell near the airport.

Prior to this, three Katyusha rockets fired from the area of Makasib, located in Baghdad province, also landed in the area adjacent to the airport.

No significant losses were reported after the incidents.

Two Rockets Land Near Iraq's Taji Military Base Hosting US Troops, Reports Say
On 11 March, an attack involving dozens of rockets was conducted against Camp Taji, an Iraqi base north of Baghdad where US and coalition troops are based. Three coalition personnel, including two US citizens and one UK national, died as a result, while 14 others sustained injuries. Washington accused pro-Iran Shia Muslim groups, in particular Kataib Hezbollah, of perpetrating the attack.

In a retaliatory move the next day, US forces conducted precision strikes against the Kataib Hezbollah militant group, hitting five weapons storage facilities and Karbala Airport in central Iraq, near Baghdad.

Several days later, Camp Taji was attacked for the second time. Three US and two Iraqi servicemen were injured.