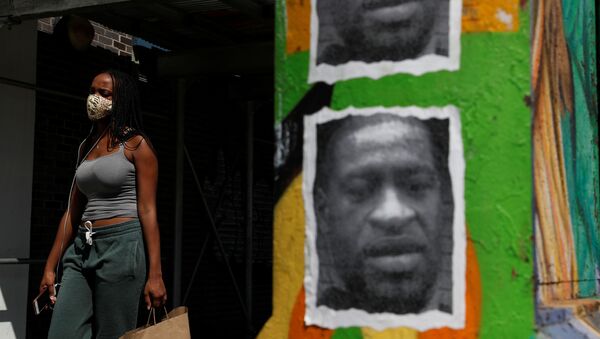 Evgeny Mikhaylov
All materialsWrite to the author
The death of George Floyd in Minneapolis police custody resulted in mass protests, riots, and looting across the United States as people held demonstrations against police brutality and even called for defunding the police. In some cases, the protests led to violent clashes, with numerous cases of arson, vandalism, and looting.

A new video depicting George Floyd's arrest in Minneapolis on 25 May was published on Thursday. The clip shows the incident from the perspective of Minneapolis Police Officer Tou Thao, who is pushing the concerned crowd at the site back from his colleagues, while Floyd is restricted by officers Derek Chauvin, Thomas Lane, and J. Alexander Kueng.

One of the witnesses shouts at the officers, pointing out that Floyd is unresponsive, while a woman approaches Thao and demands to check the black man's pulse, but Thao says he won't have a conversation about this. A man from the crowd asks if Thao is going to let another officer "keep his hand on his [Floyd's] neck like that", but the police officer dismisses the question.