Birtherism or Justified Concern? Why Harris' Eligibility for Vice Presidency Thrown Into Question 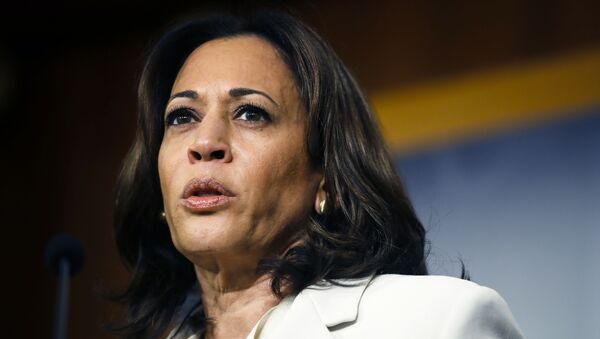 Ekaterina Blinova
All materialsWrite to the author
A Newsweek op-ed questioning Kamala Harris' eligibility for the vice presidency has prompted a firestorm of criticism from the left-leaning media and netizens which further increased after President Trump addressed the issue on Thursday.

"I heard it today that [Harris] doesn't meet the requirements", Trump stated on Thursday. "I have no idea if that's right. I would have assumed the Democrats would have checked that out before she gets chosen to run for vice president".

Almost immediately the MSM accused Trump of promoting a "birther conspiracy", citing that he had previously thrown Barack Obama's eligibility for the Oval Office into question in much the same vein.

"The answer to the question [whether Kamala Harris is eligible or not] will lie in a rich vein of publicly available information", deems Wall Street analyst and investigative journalist Charles Ortel. "Kamala's mother was born in India and her father was born in Jamaica. Each of her parents became citizens of the United States but I have not yet found reliable evidence confirming that each parent was a United States citizen on Kamala's birth date.

The author of the essay in question, Dr John C. Eastman, a Republican, professor of law and former dean at Chapman University's Fowler School of Law, writes that given Kamala Harris' Jamaican-born father and Indian-born mother were not "lawful permanent residents at the time of her birth" the congresswoman's eligibility for the US vice presidency is questionable even though she was born in Oakland, California.

Arguing with UCLA School of Law professor Eugene Volokh, who thinks otherwise, Eastman highlights that "the Supreme Court has never held that anyone born on US soil, no matter the circumstances of the parents, is automatically a US citizen".

Eastman specifies that according to Article II of the US Constitution a contender seeking the top-level office must be "a natural-born citizen", while the 14th Amendment defines "citizens" as "all persons born...in the United States, and" – what is of utmost importance, according to the lawyer – "subject to the jurisdiction thereof".

He further explains that the "subject to the jurisdiction" of the United States means a person who is a subject to the country's "complete, political jurisdiction" and not "a partial, territorial" jurisdiction. The latter appears to be the case for Kamala Harris' parents, who are believed to be temporarily sojourning in the United States at that time while having allegiance to foreign powers – India, in the case of Harris' mother and Jamaica in the case of her father.

"If the latter were indeed the case, then derivatively from her parents, Harris was not subject to the complete jurisdiction of the United States at birth", argues Eastman.

Earlier, the lawyer outlined his point with regard to the citizenship clause in his August 2015 op-ed for the National Review, citing the 1898 case of Wong Kim Ark and the 1884 case of Elk v. Wilkins. Then, in 2016, Eastman touched upon the matter again while explaining why Ted Cruz was eligible to run for the presidency as he was a child of natural born subjects although he was born overseas. In 2008, the same principle was applied by some lawyers to then presidential candidate John McCain who was born on a military installation in the Panama Canal Zone in 1936.

Newsweek, the media outlet described by independent fact-checkers as "leftist", vigorously shielded Eastman's op-ed, insisting that it has "nothing to do with racist birtherism" and is rather an argument in an "arcane legal debate about the precise meaning of the phrase 'subject to the jurisdiction thereof' in the Citizenship Clause of the 14th Amendment".

Eligibility Issue is an Old Trap for Candidates

The issue of eligibility routinely pops up during election cycles, wrote The New York Times in 2008, revealing that the rights of Chester A. Arthur, Franklin D. Roosevelt Jr., or George Romney to throw their hats into the ring were also questioned.

This eligibility question was also raised about McCain and Ted Cruz. https://t.co/dOOPmDIF2U

​Thus, it is hardly surprising that President Trump has addressed the matter with regard to Kamala Harris, according to Ortel.

"I agree with President Trump that Harris is an excellent choice because she is such a poor candidate conceivably to hold the top executive position as she has no relevant management experience", he suggests. "As a guess, the Trump campaign is hoping Democrats formally select the Biden-Harris ticket and afterward will attack with force never yet seen in American history".

However, Eastman goes further: apart from discussing Harris' legal right to run for vice president, the lawyer throws into question the congresswoman's eligibility for her current position as a United States senator.

"Article I, Section 3 of the Constitution specifies that to be eligible for the office of senator, one must have been 'nine Years a Citizen of the United States'", Eastman writes. "If Harris was not a citizen at birth, we would need to know when (if ever) she became a citizen".

According to the lawyer, there's some dispute over whether her parents were formally naturalised in the US. If neither were naturalised, or at least not naturalised before Harris' 16th birthday, which would have allowed her to obtain citizenship from them in accordance with immigration laws at the time, then she would have had to naturalise herself.

"That does not appear to have ever happened, yet without it, she could not have been 'nine Years a Citizen of the United States' before her election to the US Senate", argues Eastman, adding that he had no doubt that his legal opinion on Harris' constitutional eligibility "will be dismissed out of hand".

Though the issue raised by Eastman has caught the headlines both in the US and abroad, the MSM is downplaying and marginalising the point, Ortel remarks.

"The mainstream media is in the tank for Biden and for Harris", the Wall Street analyst underscores. "That said, independent thinkers on the left are not happy with her and her record, while independent journalists and podcasters are already raising many key issues about her and her abrupt change from Biden foe to Biden fan".