Billie Eilish Set to Perform During Next Week’s DNC Event 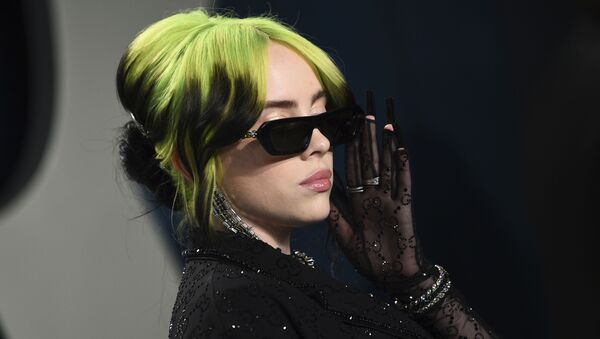 Muhammad Osman
All materialsWrite to the author
Due to the coronavirus (COVID-19) pandemic in the United States, the Democratic Party will stage its 2020 National Convention virtually on Monday 17 August. Expected to take place over four nights, until Thursday 20, the event will see former US Vice President Joe Biden officially accepting the party nomination for the 2020 US election.

Pop singer Billie Eilish, widely known for her hit song "Bad Guy", is going to take the stage next week during the Democratic National Convention, where the party will officially nominate former US Vice President Joe Biden for the November election. She is to become one of the performers from a list of prominent US musicians who is expected to show up at the event, according the 2020 DNC program organizers.

The four-day event, said to be designed “to unite the country behind Joe Biden’s vision for a better America for all”, will also include performances from artists such as John Legend, Leon Bridges, The Chicks, Common, Billie Eilish, Jennifer Hudson, Billy Porter, Maggie Rogers, Prince Royce, Stephen Stills and others.

“In just three days, we will kick off a Democratic National Convention that will look and feel very different than past conventions. It will truly be a convention across America, and these incredible artists will help us tell the story of where we are as a country today under Donald Trump’s failed leadership, and the promise of what we can and should be with Joe Biden as president,” said the executive of the 2020 DNC Program, Stephanie Cutter, in a statement. “These artists are committed to engaging with, registering and mobilizing voters to get us over the finish line in November.”

This year’s DNC, unlike previous years, is set to be held virtually from Milwaukee, Wisconsin, due to the ongoing coronavirus pandemic. The convention will hear speeches from Biden and his vice-presidential running mate, California Senator Kamala Harris, and other prominent Democrats, including former US Presidents Barack Obama and Bill Clinton.

Pop singer and songwriter Billie Eilish, who rose to fame in 2015 for her ‘Ocean Eyes’ song, has been known for her display of oversized clothes and her earlier assertions of keeping her body out of the spotlight as a means of avoiding sexual objectification.

In recent months, the 18-year-old artist, who won Song of the Year for her hit ‘Bad Guy’ at the 2020 Grammy Awards, came under fire from fans several times for contrasting her baggy clothing style after she shared on Instagram a video of her wearing a swimsuit from a tropical vacation last year.

In response to the criticism, in late-May, Eilish shared a short teaser film called "Not My Responsibility" that featured her stripping off her black tank top over an ambient soundtrack, giving a glimpse of her bra but then sinking into black liquid resembling ink.