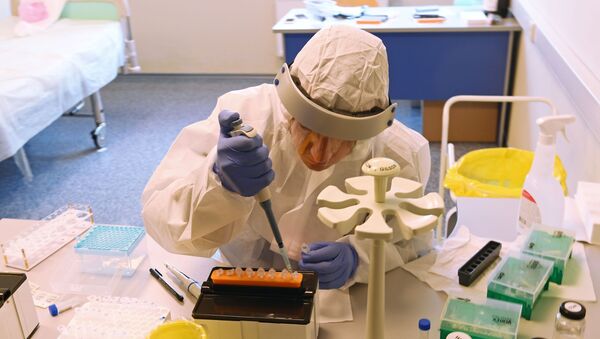 Evgeny Mikhaylov
All materialsWrite to the author
While the pandemic is forcing countries to re-impose quarantine measures, Russia has announced its Sputnik-V vaccine, the world’s first, in a bid to curb COVID-19. The drug is expected to be delivered to hospitals in two weeks.

At the moment, the United States remains the most affected nation, with almost 5.2 million infected and over 166,000 deaths, while Brazil is second with 3.1 million coronavirus cases and a death toll surpassing 104,000, according to Johns Hopkins University. India, which has had the highest daily increase, is third in terms of infections (over 2.3 million), while Mexico has the third-highest death toll, with around 54,000 fatalities.

MOSCOW (Sputnik) – Germany has confirmed 1,449 new COVID-19 cases over the past 24 hours, with the total count reaching 221,413, the Robert Koch Institute said on Friday.

The death toll has grown by 14 to 9,225 people within the same period of time. As many as 200,200 people have recovered since the start of the outbreak.

On 26 July, North Korea said that a man, who had left the country three years ago and illegally arrived back on 19 July, was suspected of being infected with COVID-19. The man was detained in Kaesong and his coronavirus test was uncertain.

Later, North Korean media reported that the country had not still confirmed any COVID-19 cases. However, Kaesong was fully isolated, and the North Korean authorities declared a state of emergency in the city.

MOSCOW (Sputnik) – The number of confirmed COVID-19 cases in Mexico has increased by 7,371 within the past 24 hours and has thus reached 505,751, Jose Luis Alomia, the director of epidemiology at the Health Ministry, said.

He also said on late Wednesday that the death toll had risen by 627 to 55,293 people within the same period of time.

“Since the start of the epidemic, more than half of million cases – 505,751 ones – and 83,075 people are awaiting results of their tests. The number of confirmed cases includes 55,293 people, who died of COVID-19 complications,” Alomia said at a press conference on late Thursday.

A day earlier, the Latin American nation recorded 5,858 new confirmed cases of the coronavirus, with 737 fatalities.

The French Minister of State for European Affairs, Clement Beaune, expressed regret over the UK decision to impose self-isolation on people arriving from his country amid rising COVID-19 infection rates in the country, and voiced readiness to respond to the move.

Earlier on Thursday, the UK Secretary of State for Transport, Grant Shapps, introduced a mandatory 14-day quarantine for anyone arriving from France, the Netherlands, Malta, Monaco, the Turks and Caicos Islands, and Aruba, over the rising COVID-19 outbreaks in those countries and territories.

As of Thursday, France has registered over 244,000 coronavirus infections, and at least 30,392 fatalities.

BUENOS AIRES (Sputnik) – Argentina has confirmed 7,498 new cases of the coronavirus across the country within the past 24 hours, with the total number of people infected with COVID-19 having reached 276,072, the national Ministry of Health said.

"Today, 7,498 new cases of COVID-19 have been confirmed, bringing the total number of [COVID-19] positive tests in the country to 276,072," the ministry said in a daily bulletin on late Thursday.

The death toll has increased by 149 to 5,362 people within the same period of time.

The World Health Organization declared the COVID-19 outbreak a pandemic on 11 March. To date, more than 20.7 million people have been infected with the coronavirus worldwide, with over 752,000 fatalities, according to Johns Hopkins University.

WASHINGTON (Sputnik) - The US Senate has adjourned until September without reaching a deal on a novel coronavirus (COVID-19) relief package.

Senate Majority Leader Mitch McConnell kept the chamber in session this week, which is technically the beginning of August recess, in a last-ditch effort to negotiate a COVID-19 relief bill, The Hill reported on Thursday.

The US Senate will return on 8  September while the US House is expected back on 14 September.

On Saturday, US President Donald Trump signed four executive actions on COVID-19 relief amid the lack of a compromise from Congress, which earlier this year passed $3 trillion worth of relief.  Trump's orders provide a payroll tax holiday to Americans earning less than $100,000 per year, grants $400 per week in unemployment benefits, loan relief and suspension of evictions.

Earlier on Thursday, White House Economic Adviser Larry Kudlow said there is no real need for another COVID-19 relief bill thanks to the orders signed by Trump to reopen school and protect workers.

Trump’s Democratic rivals say his executive orders are unconstitutional and want a $600 payout restored that was in the previous relief package. The president, standing for reelection in November, is looking to revive the economy from a record decline of nearly 33 percent in the second quarter, brought on by the COVID-19 pandemic.

MOSCOW (Sputnik) – The number of confirmed COVID-19 cases in Brazil has increased by 60,091 to 3,224,876 within the past 24 hours, the national Ministry of Health said on late Thursday.

Brazil comes second on a global tally of coronavirus cases after the United States, which has recorded more than 5.2 million COVID-19 patients.

The World Health Organization declared the COVID-19 outbreak a pandemic on 11 March. To date, more than 20.7 million people have been infected with the coronavirus worldwide, with over 751,000 fatalities, according to Johns Hopkins University.

The United Kingdom is planning to impose a 14-day quarantine for all people arriving from a number of countries, including France, the Netherlands and Malta, according to UK Secretary of State for Transport Grant Shapps in a Thursday announcement citing an ongoing resurgence of coronavirus (COVID-19) infection cases.

“Data shows we need to remove France, the Netherlands, Monaco, Malta, Turks & Caicos & Aruba from our list of #coronavirus Travel Corridors to keep infection rates DOWN,” Shapps tweeted. “If you arrive in the UK after 0400 Saturday from these destinations, you will need to self-isolate for 14 days.”

"I think there was specific question about whether or not we would see the WHO expanding use of that [Russia's COVID-19 vaccine] — we do not have sufficient information at this point to make a judgment on that, and we are currently in conversation with Russia to get additional information and understand the status of their products, the trials that have been undertaken and that what the next steps might be", Dr Bruce Aylward, senior adviser to the WHO director-general, said at a briefing.

Mitigation efforts include universal mask requirements in airports and on airplanes, with plane cabins and airports frequently subjected to deep cleaning measures.

The IATA urged governments to help restore passenger confidence that air travel is safe, even during a pandemic, by lifting travel restrictions and finding alternatives to quarantine requirements.

The release also included an updated forecast predicting a 60 percent drop in passenger numbers in 2020, with passenger demand recovering to pre-pandemic levels by 2024.

"Before spending another $10 trillion dollars on the consequences of the next #COVID19 wave, we estimate that the world will need to spend at least $100 billion on new tools, especially any new vaccines that are developed"-@DrTedros

"[W]e're sensitive to the fact that we're doing so much heavy borrowing", White House Economic Adviser Larry Kudlow told CNBC. "But again, with ultra-low interest rates, [like] 60 basis points on the ten-year [Treasury note], if you have to borrow this is the time to borrow. It's an emergency situation and we have to reinvest that money into the American economy".

Kudlow acknowledged that there are limits on the power to borrow, but said the US government is not near the limit yet.

"From 1 August of this year, in accordance with the order of the Russian government dated 31 July... Restrictions on the entry of foreign diplomats and holders of service passports for short-term business trips that were introduced earlier as part of efforts against the spread of COVID-19 have been lifted",  Russian Foreign Ministry spokeswoman Maria Zakharova said at a briefing.

"AstraZeneca is not the only one, we are working with three [pharmaceutical] companies: Pfizer, which is already conducting research here, and a Chinese manufacturer [Sinopharm], which is almost ready to begin clinical trials here", Health Minister Gines Gonzalez Garcia said on air the TN broadcaster.

Garcia added that Argentina was currently working with these three, however, if there came an opportunity to buy another manufacturer's vaccine, the government would do so right away.

According to Japan's Kyodo news agency, the decision was made during a meeting between Japanese Foreign Minister Toshimitsu Motegi and his Singaporean counterpart, Vivian Balakrishnan, earlier in the day.

"We will just need to confirm small details before the resumption of reciprocal visits", Motegi told reporters following the meeting, as quoted by the news agency.

Kyodo also reported that the agreement reached by Japan and Singapore would concern short-term business travellers, as well as expatriates and other long-term residents. In particular, the eligible business travellers will not be subject to a 14-day quarantine upon their arrival in Japan or Singapore if they comply with several conditions, including submitting an itinerary of their stay, and limiting their travel to between where they are staying and the workplace, among others.

Meanwhile, expatriates and other long-term residents will have to stay at home or a designated location for 14 days upon their arrival in the countries, the news agency added.

The travellers in question will also have to report their health condition to authorities via the Line messaging app for 14 days after arriving in the countries, install a special COVID-19 contact tracing app, as well as agree to retain GPS data for two weeks.

As of now, Japan has banned the entry of all foreign nationals from 146 countries and regions with an unfavourable epidemiological situation. In July, the authorities decided to discuss the possibility of relaxing travel restrictions with 12 of them, including Singapore. Japan has already discussed the issue with Vietnam, Thailand, Australia, and New Zealand.

"Over the past 24 hours, Russia has confirmed 5,057 COVID-19 cases in 83 regions, of which 1,331 (26.3 percent) have been detected with people showing no clinical symptoms”, the response centre said in a statement.

This takes the total case count to 907,758, with the daily increase standing at 0.6 percent.

MOSCOW (Sputnik) – India has confirmed 66,999 new cases of the coronavirus over the past 24 hours, marking the largest daily increase since the start of the outbreak, with the total number of those infected having reached 2,396,637, the country's Ministry of Health and Family Welfare said on Thursday.

The death toll from the disease has reached 47,033, with 942 new fatalities recorded over the past day. More than 1.69 million people have recovered in the country.

"I was diagnosed with COVID-19 infection. I feel good but must observe isolation and take the necessary measures to fight the virus", Rodriguez said on Twitter.

Rodriguez is the fourth high-level Venezuelan official to contract the coronavirus.