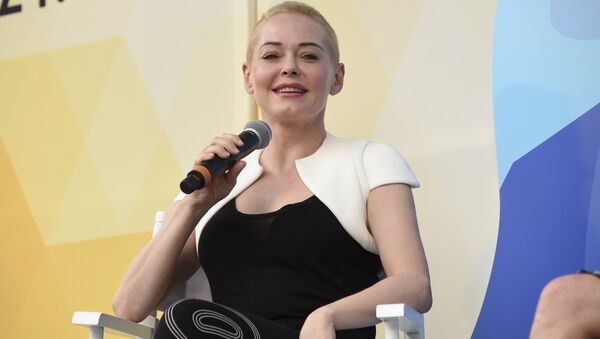 Max Gorbachev
All materialsWrite to the author
Weinstein, a prominent movie producer who worked on over 300 films, was sentenced to 23 years in jail after he was convicted in March of sexual assault and rape. The disgraced Hollywood mogul donated hundreds of thousands of dollars to the Democratic Party, including to former US Secretary of State and 2016 presidential candidate Hillary Clinton.

Hollywood actress Rose McGowan blasted Joe Biden’s choice of running mate Kamala Harris for accepting donations from Harvey Weinstein. The star of the Charmed series took to Twitter and asked the California Senator whether she had returned money donated by the disgraced film producer.

Did you return the money Weinstein gave you? @SenKamalaHarris How many predators bankroll you? https://t.co/vQmcCllRDB

​McGowan later tweeted a link to an article dating back to 2017, which said that Harris had donated money to charities and organizations that support women. The actress captioned her tweet with the following statement: "Good. Still creepy. Everyone knew."

Weinstein and his family have donated over a million dollars to the Democratic Party over the past several years. The film producers that worked on such iconic movies as Pulp Fiction, the King’s Speech, Good Will Hunting and Shakespeare in Love also maintained a good relationship with prominent members of the party, including Hillary Clinton. Ronan Farrow, one of several journalists who exposed the movie mogul, claimed in his book that Weinstein was among the many who tried to help Clinton defeat Donald Trump in the 2016 US presidential elections.

After the expose on Weinstein came out in 2017, the Democratic party a legacy champion of progressive causes, found itself in hot water while politicians, including Kamala Harris, that had received donations from the producer rushed to give the money to charities.

Recently it became know that Harris received donations not only from Weinstein, but also from Trump and his daughter Ivanka. The two donated a total of $8,000 to the Californian Senator between September 2011 and June 2014. A Harris campaign spokesperson said that the VP candidate donated the cash from the Trumps to a civil rights organization.

After Joe Biden named Harris as his running mate in the upcoming presidential election, Trump called her "nasty", "disrespectful to Biden" and a "mad woman".

Harris and Biden criticized Trump in their first campaign event in Delaware, calling the president incompetent, and accusing Trump of leaving the United States "in tatters". Three debates between Trump and Biden are planned in September and October before voters will make their decision on 3 November.