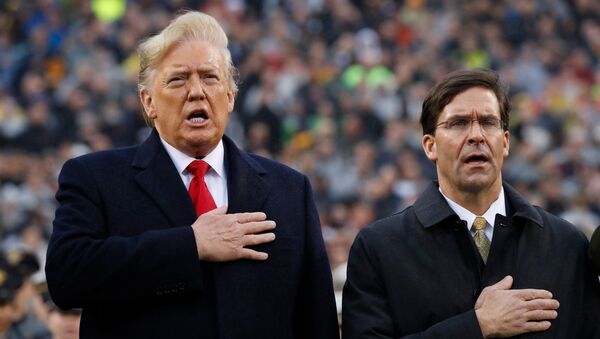 WASHINGTON (Sputnik) - US President Donald Trump has privately said that he intends to replace Defence Secretary Mark Esper if elected for another presidential term in November, Bloomberg reported on Wednesday, citing sources said to be familiar with the discussions.

The report also said, citing a source, that Esper has notified people close to him that he intends to step down from his post regardless of the outcome of the 2020 election.

Esper has clashed with Trump on topics such as opposing the US president's idea of using active-duty troops to quell unrest in the wake of George Floyd's killing in May. Trump was also reportedly furious when Esper effectively banned the Confederate flag from military bases, among other issues.

“I have always believed and continue to believe that the National Guard is best suited for performing domestic support to civil authorities in these situations in support of local law enforcement,” Esper said in a press conference on 9 June. “The option to use active-duty forces in a law-enforcement role should only be used as a matter of last resort and only in the most urgent and dire of situations. We are not in one of those situations now”.

Defense Sec. Esper: "I do not support invoking the Insurrection Act."

"The option to use active-duty forces in a law enforcement role should only be used as a matter of last resort and only in the most urgent and dire of situations. We are not in one of those situations now." pic.twitter.com/XOOaH9ltye

White House spokesperson Judd Deere did not confirm reports about the president's intention to dismiss Esper, but suggested changes in offices are expected in case Trump is re-elected.

“We have no personnel announcements at this time nor would it be appropriate to speculate about changes after the election or in a 2nd term,” Deere said on Wednesday, cited by Bloomberg.

Defence Department spokesperson Jonathan Hoffman said it’s the secretary's “highest honor and privilege” to serve the nation, and acknowledges that he does so “at the pleasure of the president.”

“He first swore an oath to the Constitution as a West Point cadet over 38 years ago, and has done so many times throughout his adult life, in both war and peace, in uniform and out of uniform,” Hoffman said in a statement to the outlet. “He continues that same commitment to duty, honor, and country today, recognizing that he serves the nation and leads the men and women of this Department as Secretary of Defense at the pleasure of the president.”

The Defence Department saw changes to its head five times, with Esper serving as an acting secretary for 21 days before he was replaced on 15 July 2019 by another acting secretary, Richard V. Spencer, who stayed in office for just 8 days. Esper was again appointed secretary on 23 July 2019, replacing Spencer.

In early June, US media reports suggested that Trump had come close to firing Esper after the defence chief said he opposed the use of the 1807 Insurrection Act to quell nationwide protests.

Media reports said Trump did not fire Esper after consulting with advisers who cautioned him against the move. Esper was reportedly expecting to be fired and had begun to prepare a letter of resignation.