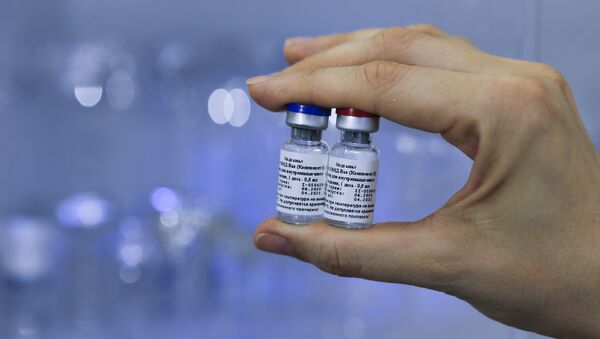 Russia on Tuesday announced the approval of the world’s first COVID-19 vaccine, surprising the international community. Russia’s state-sponsored research system may have contributed to the swift development of the vaccine, Bryan MacDonald, a journalist who specializes in Eastern Europe and Russia, told Radio Sputnik’s Loud & Clear Tuesday.

The vaccine, named Sputnik V, was developed by Russia’s Gamaleya Research Institute. Production of the drug has already started at the Russian company AFK Sistema's Binnopharm pharmaceutical factory, which is expected to produce around 1.5 million doses of the vaccine a year.

“This is a legacy of the Soviet Union. Even though Russia is considered smaller in population terms than the US and considered to be poorer by GDP, it is still ahead of the US in certain areas like missile defense and certain space technologies and stuff like that, and that’s mainly because things are done by the state rather than by the private sector,” MacDonald added.

“In this case, what the Russians say is that they’ve basically been working on vaccines for 20 years. So, for example, when SARS [severe acute respiratory syndrome] broke out over a decade ago, they [the Russians] would have immediately kind of gone into battle stations looking for SARS vaccine, as would the Americans at the time and the British. Once the virus sort of burned itself out, the private companies in the West, I presume, would have stopped developing their vaccines, because there was no point, there was no profit motive when nobody needed a vaccine anymore. What the Russians would have done is continued to look into SARS,” MacDonald explained.

Russia’s quick development of a COVID-19 vaccine could be because the country has been studying SARS and other, similar viruses for years, MacDonald noted.

“So, as it happened, when COVID-19 came on the scene, they would have gotten hold of the genome back in February or March. Because they’ve been researching vaccines for two decades, nonstop, they would have had a little bit of a head start. This is what they say,” MacDonald told Sputnik.

“So, what they say is because they were working nonstop in the vaccine field and in terms of coronaviruses, SARS viruses and all that kind of stuff for the last 20 years, they had a head start on the West,” he added.

According to Russian Health Minister Mikhail Murashko, the country has already received pre-orders for over 1 billion doses of the vaccine from more than 20 countries, the Business Insider reported Tuesday.

“The countries are in Latin America, the Middle East and Asia. I don’t know where the Chinese are in their development, because obviously China is a far more secretive country than Russia, but presuming the Russians are ahead of the Chinese on the schedule - and don’t forget, the Russians would have considerable experience in viruses and all kinds of medical research in the Soviet time; the Soviet Union led the world in many ways in certain types of medicine … so the Chinese could order a hell of a lot of it too. And there’s nothing to stop the Americans ordering for that matter. Although I don’t know how it would go down politically in America if [US President Dondald] Trump started buying vaccines from Russia,” MacDonald told Sputnik.

US medical health experts, including Director of the National Institute of Allergy and Infectious Diseases Dr. Anthony Fauci, have expressed doubts that the Russian-made COVID-19 vaccine is safe and effective, particularly because the drug has yet to undergo third-phase clinical trials.

“They tested it on 100 people. I know it sounds like a ridiculously low sample size, but they say that everybody got antibodies and nobody had any side effects,” MacDonald explained.

“Don’t forget: in Russia, it’s a different culture than America. For example, in America, AstraZeneca, who I know [is] working on a vaccine, they may actually feel that their vaccine is working. For all we know … certain people in America might be receiving the vaccine already,” MacDonald said.