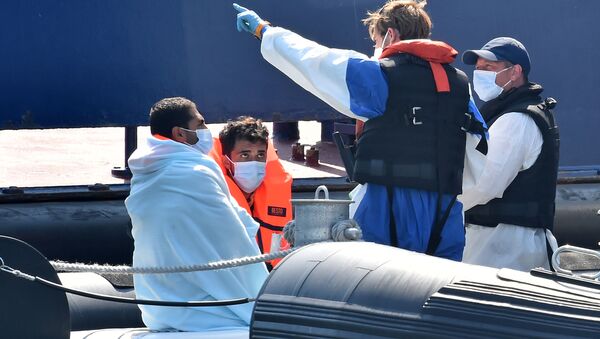 In some cases the price to cross, which can reach as high as £5,000, has dropped to £500, with babies and toddlers offered to travel on packed boats for free and older children for a reduced price.

"We've spoken to people intercepted en route to the UK who have told us how babies and infants are getting into dinghies for free. Younger children and teenagers are being allowed on for just a few hundred pounds a time", a charity worker in northern France told The Sun.

"The depths these criminals will sink to make their profit from misery knows no bounds", a police official said, while Whitehall is bracing for a dramatic rise in crossings and respective attempts on Tuesday, as a streak of bad weather is expected later this week. PM Boris Johnson blasted the bids as a "very bad and stupid and dangerous and criminal thing to do" that has to be fought against by all means. He also urged Paris to do more, saying: "There's no doubt that it would be helpful if we could work with our French friends to stop them getting over the Channel".

The National Crime Agency said last night they are completely aware of the recent attempts to cross the Channel having been facilitated by criminal networks who just see migrants as "a commodity to be exploited".

"As the gangs evolve and change their methods to evade law enforcement, so must we in order to stay one step ahead", the agency stressed in its statement.

Navy Ships to the Rescue?

UK ministers are meanwhile considering the deployment of British Navy vessels to block small boats scrambling to enter the nation's waters under plans to stem the number of migrants crossing from Calais to Dover, The Times reported.

"The Navy is well resourced and stands ready to help in any circumstances deemed appropriate. It's up to the Border Force to take whatever action they deem appropriate and they will always comply with maritime law", Downing Street earlier promised. However, the authorities are reportedly leaning towards a more extensive use of surveillance aircraft instead.

"Overhead surveillance and reconnaissance might be more useful for Border Force ­vessels", The Sun quoted a law enforcement officer as saying.

The French authorities, who of late have been blasted by several British MPs for their inaction ragarding to migrant crossings, would then reportedly be contacted to intercept the packed migrant boats, with a special focus placed on intelligence sharing between the two neighbours.

Pierre-Henri Dumont, Member of the French National Assembly for Pas-de-Calais, insisted they were doing everything in their power, adding: "If you've got dozens of crossings a day, that's very difficult for us to stop". Addressing the issue of the British Navy potentially intercepting migrant boats, he went on to rage:

"Is it going to shoot the boat? Is it going to enter French waters? It's a political measure to show some kind of muscle but, technically speaking, it won't change anything".

On Monday, British Home Secretary Priti Patel travelled to Dover to meet Border Force officials after a patrol boat had stopped a 12-man dinghy that was carrying about 20 people. While in Dover inspecting the intercept operations the minister vowed to make "this incredibly dangerous route unviable".

Official estimates suggest that between Thursday and Sunday 677 people, including a toddler, were caught making the crossing from France to England.