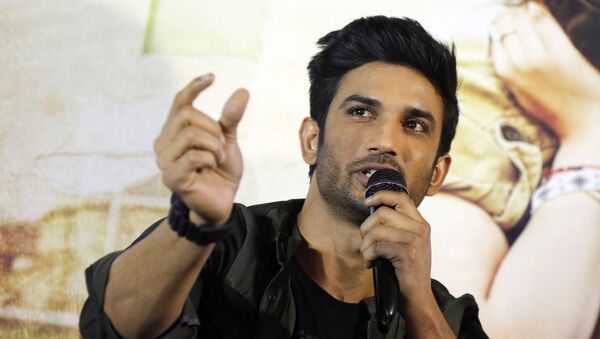 © AP Photo / Ajit Solanki
Subscribe
New Delhi (Sputnik): India’s apex court heard actress Rhea Chakraborty’s plea for the second time on Tuesday in connection with the controversial death of Bollywood actor Sushant Singh Rajput. Rhea, Sushant’s ex-girlfriend, has been booked by Bihar Police on charges of abetment to suicide and other sections, along with six others.

In the hearing of Bollywood actress Rhea Chakraborty’s appeal to transfer actor Sushant Sigh’s suicide case to Mumbai jurisdiction from Bihar state, the central government on Tuesday urged the Supreme Court that a report showing injury marks on the body of actor Sushant Singh Rajput should be put before a magistrate.

“... Mumbai Police is undergoing without an FIR... No report of the inquest has been filed before the district or sub-divisional magistrate. A basic report on apparent causes of death showing bruises, marks, wounds, or fractures should be before magistrate”, the  Indian government's second-highest ranking law officer, Solicitor General Tushar Mehta, urged the apex court on Tuesday.

Mehta stressed that Mumbai Police are investigating the matter without an FIR (official police complaint) and thus no case is pending in the city.

The Supreme Court of India on Tuesday reserved its order on actress Rhea Chakraborty’s plea, which seeks the transfer of a police complaint FIR from Patna, Bihar, to Mumbai's jurisdiction in Maharashtra state. The court has also asked for brief written notes from all parties by Thursday.

The Story So Far: Dramatic Twist & Turns in the Case of Bollywood Actor Sushant Singh Rajput
Beginning the hearing in the case, Justice Hrishikesh Roy noted that the “delay of each day is proving costly in the case”, hinting at evidence tampering and the media trial on the accused in the case.

Rhea’s lawyer Shyam Divan and senior advocate Maninder Singh, who was representing the Bihar government, presented their arguments in front of Justice Roy along with Tushar Mehta, the solicitor general of India, representing the central government.

Rhea’s lawyer Divan and Maharashtra contended that Bihar Police has no jurisdiction and that the FIR in the case is politically motivated.

However, advocate Singh, representing Bihar, argued that Sushant was from Bihar and that “Maharashtra did not register any FIR even though it examined so many people”.

“I am from Patna and without my son. I have no one to light my funeral pyre. This itself shows that Patna has jurisdiction”, said senior advocate Maninder Singh on behalf of deceased actor Sushant’s father.

He argued that Sushant’s father and sister were alienated from the couple by Rhea, as she never let Sushant answer their phone calls or texts.

“Look at the mark on his neck. It's a belt mark, not a rope! If he was murdered it needs to be investigated”, said Singh.

The message, sent on 29 November, 2019 to Rhea, read: "When you know I am Sushant's father why are you not replying me. What is the matter? You being a friend is getting him treated, then being a father it is my right to know everything about my son."

#SushantSinghRajpoot father was trying to reach him but he was isolated by Rhea and associates.
Clear involvement of #shrutimodi ..Message seen, not communicated to Sushant. (Working on someone other direction).
We will expose director of this planned murder movie.#ArrestRheaNow pic.twitter.com/6gmIcSxgzg

​On 14 June, young Bollywood star Sushant Singh Rajput's body was found hanging from a ceiling fan at his Mumbai residence. His death was officially ruled as a suicide by Mumbai Police and it started investigating whether the actor was depressed. However, a criminal enquiry was launched when Sushant's father filed a formal complaint in their home state of Bihar in July.