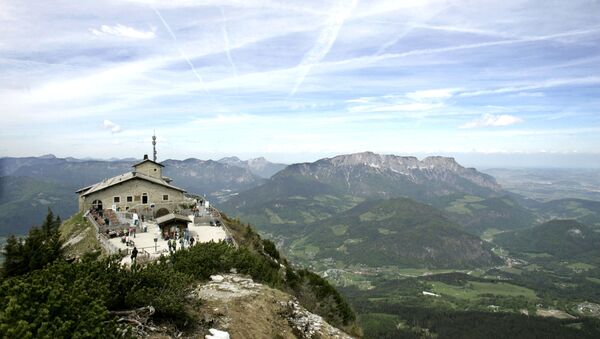 Amid a slew of backlash, a Republican candidate for the US House of Representatives from North Carolina has taken down photos of his 2017 vacation to the Eagle’s Nest, the mountain retreat of German Nazi leader Adolf Hitler.

Madison Cawthorn, a GOP candidate for North Carolina’s 11th congressional district, removed photos from his Instagram account of his 2017 trip to Bavaria that included a visit to the Eagle’s Nest, which he described as being on his “bucket list.”

Known in German as Kehlsteinhaus after the mountain on which it sits, the retreat was used exclusively by leadership in the fascist Nazi party for both professional and recreational purposes. Ironically, Hitler didn’t much care for the evil aerie, as he was afraid of heights and disliked the weather there.

Just seeing these @CawthornforNC Instagram posts from 2017...my god.

Referring to Hitler with the honorific “Führer.” Saying a visit to Hitler’s vacation home where he planned out unspeakable atrocities as a “bucket list” moment...as if it’s a visit to the Grand Canyon pic.twitter.com/AvgNSe23cO

​However, that didn’t stop Cawthorn from musing in his posts about how Hitler “shared laughs and good times with his compatriots” there, the Jewish Telegraphic Agency reported.

Although Cawthron said Hitler was a “supreme evil,” he also referred to the German dictator as “the Führer,” the reverent title given to him by the Nazis’ fascist ideology, which held that as leader, Hitler’s will was the singular embodiment of the will of the German people.

Cawthorn has made no official comment on the incident, but his election rival, Democrat Moe Davis, tweeted one of Cawthorn’s photos on Monday with the caption: “Hitler’s vacation retreat is not on my bucket list.”

Hitler’s vacation retreat is not on my bucket list.#NC11 pic.twitter.com/mxyCUt33Y6

​A recent report by Jezebel noted more white supremacist connections for Cawthorn, such as that he named his real estate company SQPR, an abbreviation for Senatus Populusque Romanus, the government of the ancient Roman Republic and a common reference point for fascist ideology. The outlet also noted the presence of several Betsy Ross flags in Cawthorn’s house. The 13-star flag dates to the American War of Independence, but as Rolling Stone reports, it has been appropriated by far-right groups in some places because of its connections to the era of Black enslavement in the US.