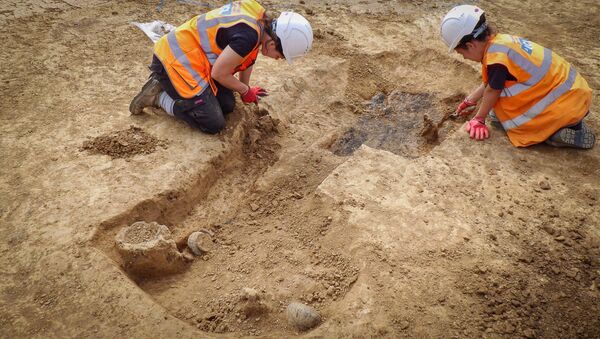 © Photo : Archaeology South-East / UCL
Subscribe
Navan Fort, in County Armagh, is one of Northern Ireland’s so-called royal sites, a group of five ceremonial centres of prehistoric origin, documented in the medieval period as one of the capital for the five-fifths that divided Ireland.

Archaeologists suggest that they have found evidence of a series of religious structures and buildings that date back to the Iron Age at Navan Fort, near County Armagh.

A team of researchers from Queen’s University Belfast (QUB), the University of Aberdeen and the German Archaeological Institute in Frankfurt discovered evidence of a vast Iron Age temple complex, the ceremonial centre of prehistoric Europe, as well as evidence for residences of early kings of Ulster from the medieval period.

The discovery was made beside Navan Fort’s visitor centre, which is associated with Irish folklore figures such as Cúchulainn, Conchobar Mac Nessa and Deirdre of the Sorrows and her warrior lover Naoise.

Lead researcher Dr. Patrick Gleeson, an archaeology lecturer at Queen's University said: "Excavation in the 1960s uncovered one of the most spectacular series of buildings of any region of prehistoric Europe, including a series of figure-of-eight buildings of the early Iron Age and a 40m timber-ringed structure constructed (around) 95 BC.

"Upon the latter’s construction, it was immediately filled with stones and burnt to the ground in order to create a massive mound that now dominates the site. Our discoveries add significant additional data, hinting that the buildings uncovered in the 1960s were not domestic structures lived in by kings, but a series of massive temples, some of the largest and most complex ritual arena of any region of later prehistoric and pre-Roman Northern Europe."

The team used magnetic gradiometry and an electrical resistance survey to locate potential structures at the site.

Gleeson explained that both processes measure "the magnetic properties of the soil" and "the way in which the soil conducts electrical resistance".

"That allows us to map the buried archaeology for which there is no above ground trace and to be very precise about the nature and interrelationships of those monuments," he said.

Dr John O’Keeffe, a principal inspector of historic monuments in Northern Ireland's Department for Communities, said: "The work has shone new light on the monument, and will inform further research as we explore what Navan Fort meant to our forebears and how they used the site, for years to come.

"It provides additional insights that inform visits to this enigmatic monument and landscape today."

The study was published in the Oxford Journal of Archaeology.

000000
Popular comments
Obviously the ancients were far more advanced than they have been given credit for.