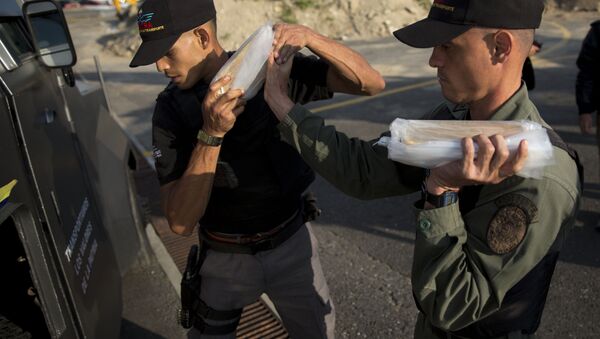 © AP Photo / Ariana Cubillos
Subscribe
LONDON (Sputnik) - The Venezuelan Central Bank (BCV) has been given the right to appeal all aspects of an original ruling by a UK court that denied Caracas custody of Venezuelan gold reserves that are currently being held by the Bank of England, a lawyer said on Monday.

According to a court order issued on 3 August, which was obtained by a Sputnik correspondent, Lord Justice Gary Hickinbottom ruled that the BCV would be allowed to appeal on all nine grounds, adding that the appeal would be heard in September.

"We are pleased that the Court of Appeal will be reviewing all aspects of this Judgment. The issues at stake tread the sensitive line between law and politics, and it is vital that they are resolved," Sarosh Zaiwalla, senior partner at Zaiwalla & Co, the law firm representing the BCV, said in a written statement sent to Sputnik.

On 2 July, the UK High Court ruled against the BCV, which has brought the Bank of England to trial for refusing to return 31 tonnes of gold deposited in its vaults on the grounds that self-proclaimed president Juan Guaido had filed a rival claim over the gold, which is valued at an estimated $1.2 billion.

After ruling that Guaido was "unequivocally" recognized by the United Kingdom as the president of Venezuela, following a statement made by then-Foreign Secretary Jeremy Hunt in 2019, judge Nigel Teare had granted the BCV a limited leave to appeal his judgment on only one ground.

According to the London-based lawyer, the UK government’s prerogative power to recognize a foreign government cannot be used to intervene coercively in the internal affairs of a foreign country, in breach of international legal norms.

"As it stands, a simple statement of recognition from the UK Government is enough to move assets away from the control of a government in effective control, without any oversight, which we say cannot be correct. If the UK Government is going to use recognition as a weapon to pursue its foreign policy goals, it must nevertheless do so within the legally permissible limits of that power, and subject to oversight by the courts," he said.

Zaiwalla also stressed that his client's main concern has been ensuring that the assets of the Venezuelan people are available to help the country curb the ongoing COVID-19 pandemic, adding that the UK has not severed diplomatic ties with President Nicolas Maduro’s government.

"Mr. Maduro’s government remains in sole, undisputed, control of Venezuela’s instruments of state, and is therefore the only one that can utilise the gold to help the country in its fight against coronavirus," he said.

The Venezuelan government has said that the proceeds from the sale of the gold would be channeled through the United Nations Development Programme to combat the COVID-19 pandemic in the South American country.

According to the August 3 court judgment, Hickinbottom ruled that the appeal hearing must be held in September, given that the assets in question are urgently needed in Venezuela due to the ongoing epidemiological health crisis.

000000
Popular comments
Appalling that a total flake and fake like Guiado who doesnot currently hold any position of power in Venezuelan politics can use foreign political power pawns to deprive the Venezuelan people of desperately needed funds in a cruel pandemic. Guaido's actions have directly cost 100,000 Venezuelan lives. UK courts must uphold the law and return the gold to the Venezuelan government for the benefit of Venezuelans.