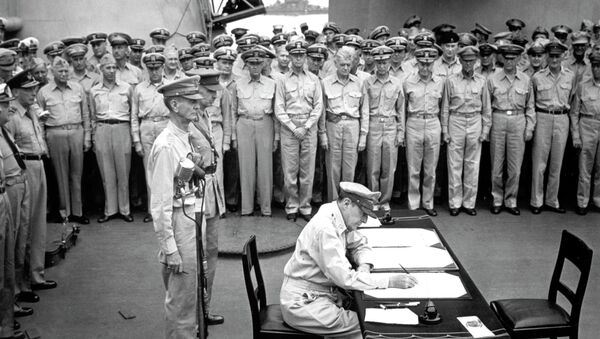 © AP Photo
Subscribe
During a news conference on Monday, US President Donald Trump falsely said the 1918-1920 influenza pandemic had a likely role in ending World War II, which did not begin until 1939.

During a press briefing on Monday, Trump was asked how he would have reacted if his Democratic predecessor, former US President Barack Obama, had presided over a pandemic that unfolded as the COVID-19 pandemic has in the United States. However, his answer was a bit anachronistic.

“If 160,000 people had died on President Obama’s watch, do you think you would have called for his resignation?” a reporter asked at the White House.

“No, I wouldn’t have done that. I think it’s been amazing what we’ve been able to do. If we didn’t close up our country, you would’ve had 1 and a half or 2 million people already dead. We’ve called it right, now we don’t have to close it. We understand the disease, nobody understood it because nobody’s ever seen anything like this," Trump said.

"The closest thing is in 1917, they say, right? The Great Pandemic. It certainly was a terrible thing, where they lost anywhere from 50 to 100 million people. Probably ended the Second World War, all the soldiers were sick. It was a terrible situation," he continued.

Let's back up a bit here. The great influenza pandemic to which Trump refers actually didn't begin until 1918. While there were huge outbreaks among the millions of troops deployed on the front lines, the virus didn't have a major role in ending the war (as Trump has previously claimed), as the worst peak of infections and deaths came after the November 1918 ceasefire. The pandemic had subsided by the end of 1920.

However, this was the First World War, not the Second World War, as Trump said, which did not even begin until nearly 20 years later, in 1939 in Europe, or perhaps 1931 in the most charitable historical reading, if one begins with the Japanese invasion of Manchuria, and certainly did not end anywhere until 1945.

Given that Trump visited the World War II Memorial in Washington, DC, this past May to commemorate the 75th anniversary of Victory in Europe Day, one might have expected him to keep the dates straight.

000000
Popular comments
Trump is not only ignorant, he is also lazy. It would have taken him only a few minutes on the web to know everything relevant about the Spanish flu.... But I suppose he realizes that 90% of the people he is speaking to are as ignorant as he is...
Sertorius
11 August 2020, 01:54 GMT7
000000
Sertorius, He was referring to WWI. He should fire his speech writers.
spirited
11 August 2020, 02:03 GMT
000000
Newsfeed
0
New firstOld first
loader
LIVE
Заголовок открываемого материала
Access to the chat has been blocked for violating the rules . You will be able to participate again through:∞. If you do not agree with the blocking, please use the feedback form
The discussion is closed. You can participate in the discussion within 24 hours after the publication of the article.
To participate in the discussion
log in or register
loader
Chats
Заголовок открываемого материала
Worldwide
InternationalEnglishEnglishMundoEspañolSpanish
Europe
DeutschlandDeutschGermanFranceFrançaisFrenchΕλλάδαΕλληνικάGreekItaliaItalianoItalianČeská republikaČeštinaCzechPolskaPolskiPolishСрбиjаСрпскиSerbianLatvijaLatviešuLatvianLietuvaLietuviųLithuanianMoldovaMoldoveneascăMoldavianБеларусьБеларускiBelarusian
Transcaucasia
ԱրմենիաՀայերենArmenianАҧсныАҧсышәалаAbkhazХуссар ИрыстонИронауОssetianსაქართველოქართულიGeorgianAzərbaycanАzərbaycancaAzerbaijani
Middle East
Sputnik عربيArabicArabicTürkiyeTürkçeTurkishSputnik ایرانPersianPersianSputnik افغانستانDariDari
Central Asia
ҚазақстанҚазақ тіліKazakhКыргызстанКыргызчаKyrgyzOʻzbekistonЎзбекчаUzbekТоҷикистонТоҷикӣTajik
East & Southeast Asia
Việt NamTiếng ViệtVietnamese日本日本語Japanese中国中文Chinese
South America
BrasilPortuguêsPortuguese
NewsfeedBreaking
13:34 GMTVery Special Fashion: 'Let's Go Brandon' Store Opens in Massachusetts
13:24 GMTLavrov, Blinken Reportedly Had 'Testy Exchange Over Ukraine' at OSCE Gathering
13:18 GMTEx-UK Scientific Advisor: Detection of Omicron Variant Means Pandemic Not Over Yet
13:07 GMT'Let's Spoil Their Weekend?' Russia Breaks Down German Tabloid's 'Ukraine Assault Plan' Propaganda
12:21 GMTProtests Against French Presidential Candidate Eric Zemmour Held in Paris
12:15 GMTEnglish Premier League Clubs Considering Adding Vaccination to Players' Contracts, Reports Say
11:40 GMTSaudi Arabia Opens Borders to Visitors Vaccinated With Sputnik V
10:57 GMT'We Can Fix It': Boris Johnson to Announce UK Government's Full-Fledged War on Drugs
10:55 GMTAhead of Crucial Assembly Polls, Opposition Slams BJP-Led Uttar Pradesh Gov't for Beating Protesters
10:39 GMTPrince William Speaks About Depression and 'Cringing' Moment With Singer Taylor Swift on Podcast
10:29 GMTUS, Allies Call on Taliban to Ensure Amnesty for Ex-Afghan Security Forces Members
09:52 GMTRocket to Inject Japanese Space Tourists Into Orbit Installed on Launch Pad at Baikonur
09:49 GMTSaudi Aramco Signs Contracts With French Companies on Eco-Friendly Business
09:15 GMTExplosions Reportedly Heard Inside US Military Base in Eastern Homs, Syria
09:11 GMT'Is Superman Circumcised?' Oddest Book Title and Unexpected Take on Superhero's Origins
09:01 GMTChina Releases Report on Ills of American Political System Before US-Hosted Summit on Democracy
08:59 GMTRelief Teams on Alert as Cyclone Jawad to Hit Indian State of Odisha on Sunday
08:44 GMTFormer CNN Host Chris Cuomo is Accused of Sexual Misconduct, Media Says
08:16 GMTUK AG to Review Jail Sentences of 'Evil Monsters' Who Killed 6-Year-Old Arthur Labinjo-Hughes
08:05 GMT'We Love You!': English Football Teams Pay Tribute to Late 6-Year-Old Arthur Labinjo-Hughes